Sonicbids at SXSW: Top Insights From Our DIY Music PR Panel on How to Pitch Your Band 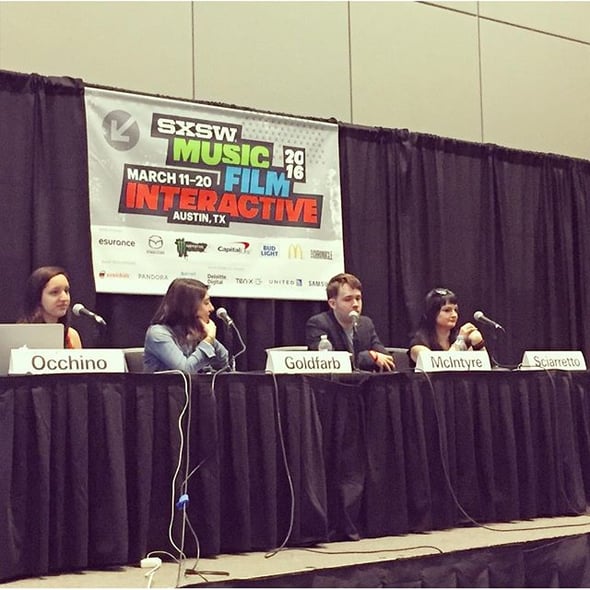 This year at SXSW, three Sonicbids blog contributors – Hugh McIntyre (that's me), Laura Goldfarb, and Amy Sciarretto – all spoke on the panel "DIY Music PR: The Secrets of Pitching Your Band," moderated by Sonicbids managing editor Lisa Occhino, which looked at how those just getting started in the music business can approach the media world appropriately and effectively. With both music journalists and publicists on the panel, there were plenty of perspectives, and all told it seemed like everybody in the room was able to take something away from the discussion.

The panel was recorded, and I've pulled a few of the top highlights from the many topics discussed during the hour-long session. If you didn’t make it to Austin earlier this month (or if you just happened to miss our panel), check out the recap below of the most important insights.

What are some harsh realities new bands don’t realize when they start doing their own PR?

Hugh: Ninety-nine percent of the time, it’s not that your single isn’t good, it’s not that we don’t think you’re going to go somewhere, but it’s not appropriate just yet. Keep that in mind.

Where does a band with no press connections start? What is their first move?

Amy: Make friends with your local media, because they’re the ones that are going to stick with you. It’s perfectly acceptable and encouraged to work with someone that’s on the rise. Look for people with just 1,000 readers, because you two can hold hands and come up together.

Hugh: Once you’ve gone after some of those smaller ones, you can go after a Billboard or a Rolling Stone, but you’ll have 10 press clippings to show, even if people don’t know the outlets.

Do you think that all artists should handle their own PR in the beginning, or is there a time when they should work with a publicist before doing it themselves?

Hugh: No. If that’s how you have to start, that's fine, but I have gotten so, so, so many emails from artists just starting out that just aren’t done right. Publicists are there not just because of their connections, but because they know how to format emails, write them, and do them right.

How do you get taken seriously by a journalist?

Hugh: The first and most important thing that I would say is do not waste someone’s time. Keep that in mind when you’re doing everything, from writing your blurb to when you’re sending the email.

Let’s say someone in the audience wanted to have a blog write about their music today. When should they have started planning their PR campaign?

Amy: For a PR campaign for something specific – whether it’s an album, a single, or a tour – you have to start at least three months in advance for print, because those publications have deadlines for printing their materials. I would say you need at least a month to start out for digital, understanding that you may pitch them for a month and not get a response for three or six months. A lot of PR is maintenance, education, and following up.

Hugh, just so people can have a frame of reference, how many pitch emails do you get every day?

So, you open emails from the people you know and trust. For people you don't know, what's in the subject line that gets you to open them?

Hugh: My name. Something that tells me what it is. It’s not just, "Great new band to check out!" it’s something I can read and automatically have a sense of what it is before I open it. Something like "invite." Things like that.

Once you open it, what would it take to get you to actually read and respond to it?

Hugh: If I open the email and it’s three or four paragraphs, I’m not even going to start. Is it a block of text, or is it visually appealing? Can I click something and hear the song on your SoundCloud, or am I going to have to dig for it? Is it all right there? Is it a full package? Okay, maybe.

Laura: And that’s a maybe! I very often have to remind myself not to take it personally [as a publicist].

What do you see as a typical response rate for emails? How many emails does it take to get a couple of reviews or features?

Laura: A lot. One out of a hundred is pretty damn good.

Amy: I’ll reach out to the people I know and have worked with a lot… but you have to do the blanket as well. There could be a needle in a haystack, but you have to go for it.

Hugh: The truth of it is, the whole thing kind of sucks on everyone’s end. There are great bands that don’t get write-ups, and I miss tons of great stuff. It’s just the way of the world.

Amy: One thing that I’ve found to be very important is to do a lot of the work for the writer or the editor. Give them as much as you can so they have everything.

Lisa [moderator]: I have to totally agree. If you say, "Here’s the story, here’s why it’s interesting, and here’s why it would work for your publication," you have infinitely better chances of getting featured.

Laura: Please have a really great bio, too. If you need to, hire a professional to write it for you. A great one sheet, a great bio, is often just copy and pasted in a blog or newspaper. There’s probably hundreds of publications we [publicists] don’t have bylines in, but where our words have been printed.

Let’s talk about the pitch email. What are the bare bones you need to have in it to be considered?

Laura: I like to start with something polite and nice, like "Hi! How are you," or "I hope you had a great weekend!"

Hugh: If you’re going to send your own pitch email, make a checklist. Add everything. When does the single come out? How can I contact you? Don’t forget the photo credit! In terms of music links, I’d suggest putting it on YouTube or SoundCloud. You can make it private if you want, but those are options that everyone can click on and listen to.

Amy: You really need to know what story to tell. Basic elevator pitch: if you can’t get it across in 25 seconds, you might have lost them. It’s that way in a lot of life.

After you get press, what do you do right away?

Amy: Thank them, share it on social channels, and keep a copy of the clip. Keep it in a Google doc or make a press kit on Tumblr, [which is] super easy. Make sure you keep a record of those things.

Hugh: I always appreciate when people post it on social media and thank me.

What do you do to maintain goodwill with writers and editors without actually asking for anything?

Laura: I try to be active on social media, and I also try to read a lot of magazines and blogs. That way I know what’s going on and I know what people are writing. I’ll send a lot of tweets telling people I loved what they wrote and actually mean it. Retweeting a lot of their posts as well.

Want more tips and strategies to get press for your band? Check out our Ask a Music Journalist and Ask a Publicist columns!