Sound Treatment Basics: How to Get a Professional Sound in Your Home Studio 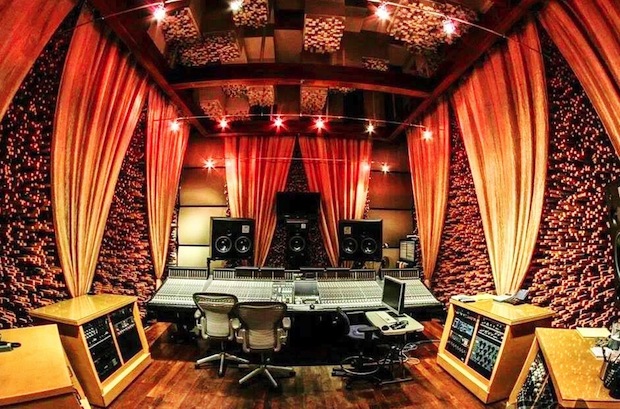 Now that we've covered the basics of soundproofing, this time were going to talk about what sound treatment is and why you need it if you want recordings in your home studio to sound professional. Sound treatment differs from soundproofing because its goal is to tailor the acoustics of the space, not stop sound transmission from outside or within. The two reasons this is important are particularly critical and apparent in recording and mixing. The first reason is that while mixing, if you can't differentiate what's coming from your monitors and what's an anomaly within the room, it's next to impossible to achieve an accurate mix that will translate to other systems, which is pretty much the entire goal of the mixing process. The other reason is to help eliminate sound characteristics and coloration captured on a recording.

This doesn't necessarily mean that you don't want to capture the sound of a room when recording; this can often be a desirable practice. The difference is, you more than likely don't want to capture the sound of your space. It's nothing personal, it's just that the odds are that your bedroom or basement probably don't have the acoustic traits you'd want to capture. Studio live rooms are usually purpose-built, with meticulous attention paid to treatment and design, and this does make a considerable difference. The overall goal of any of treatment method is to even out the frequency response of the room and also eliminate phenomena like "slap" or flutter echoes. 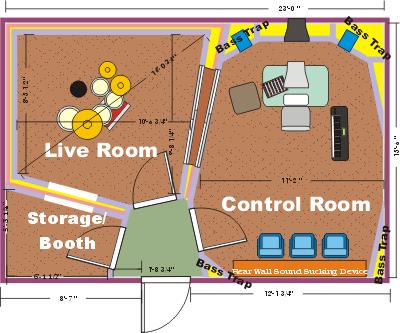 Perhaps the easiest place to start is a room that, by design, is resistant to acoustic anomalies. There's a reason many studios have uniquely shaped rooms: the shape helps to eliminate the possibility of standing waves and avoid slap-like reflections. By designing a room without parallel walls, you naturally create some degree of diffusion and prevent the buildup of these standing waves that will change the frequency response of the room. Standing waves occur when a sound pressure wave is allowed to bounce back on itself and can result in either peaks or nulls at certain frequencies depending on the shape and size of the room.

As this is often prohibitively expensive on a home or project studio budget, most people usually move on to applied treatment practices. Even if the issue of parallel walls is eliminated, other methods of treatment are still typically applied to these walls and ceilings. Sound treatment that is applied to surfaces can be generally classified in two categories: diffusion and absorption. 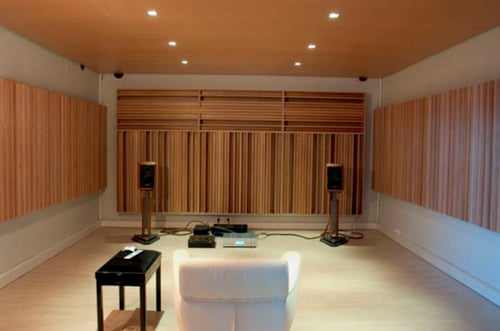 Diffusers are designed to disperse sound waves that approach them. As sound approaches a hard, flat surface, it's reflected off that surface very directionally. A diffuser's goal is to interrupt the energy from the sound wave by diverting it and ideally staggering its arrival back to the original source as well, effectively eliminating the listener's ability to perceive an echo or the "sound" of the room. 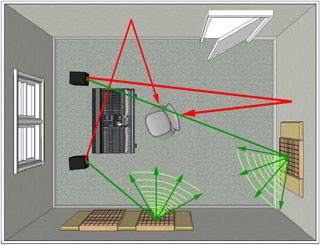 Diffusers come in many different shapes and designs, but the end goal is the same: to achieve the properties in the illustration above. The benefit of diffusers over absorbers is that they do their job without robbing the sound of energy and keep a more even frequency response in the room. Diffusers, however, are designed specifically for intended purposes, and their seemingly random shapes are actually the intentional result of mathematical calculations. Therefore, they tend to make diffusion more expensive than other methods. 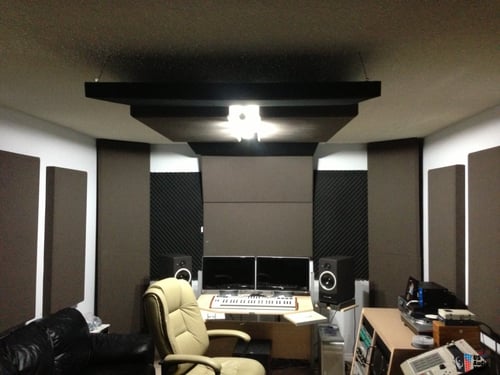 While used similarly to diffusers, as their name suggests, these tools absorb the energy of the sound wave so that resulting reflections, if any, have been dampened. Usually, this is some sort of foam or rigid fiberglass, and yes, it's a very different foam than the kind you'll find in "egg crate" mattress toppers or whatever else you might have been about to tack to the wall. Absorbers work by combining these materials with an air gap that allows the material to effectively reduce the energy of any reflections. 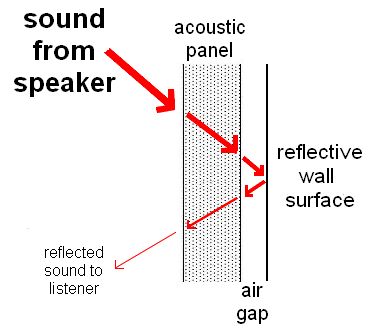 These are usually cheaper than diffusers, but too much absorption in a space can cause an unnaturally dead sound or begin to create other issues acoustically (i.e., uneven or unreliable high-frequency response). In order to be effective, the lower the frequency you're trying to "stop," the thicker the absorber material needs to be. For example, your typical two-inch acoustic foam works great for everything above 500 Hz but remains more or less ineffective below that point.

So if we have effective methods for dealing with mid- to high-frequency waves, how do we deal with low-frequency information? 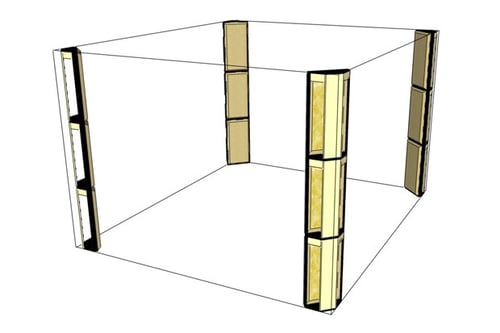 Traps are the acoustic answer to our low-frequency woes. While there are a couple of designs, their placement and purpose remain effectively the same. Especially in small rooms, room modes or increased resonances at certain frequencies exist. Resonating bass traps consist of a rigid panel that more or less floats on an absorptive material and resonates at particular frequencies. Care must be taken when purchasing or designing resonant bass traps, as they only work for small-frequency bands. Absorptive bass traps are basically massive amounts of acoustic foam or rigid fiberglass that rely on the sheer mass of the material to hamper low-frequency energy. While not as surgically effective as a resonating bass trap, they're usually broadly effective against low-frequency build-up, particularly in smaller spaces. These are both typically installed in the corners of rooms, as this is where low-frequency waves usually "anchor" themselves and are most easily negated by placing a trap in these locations.