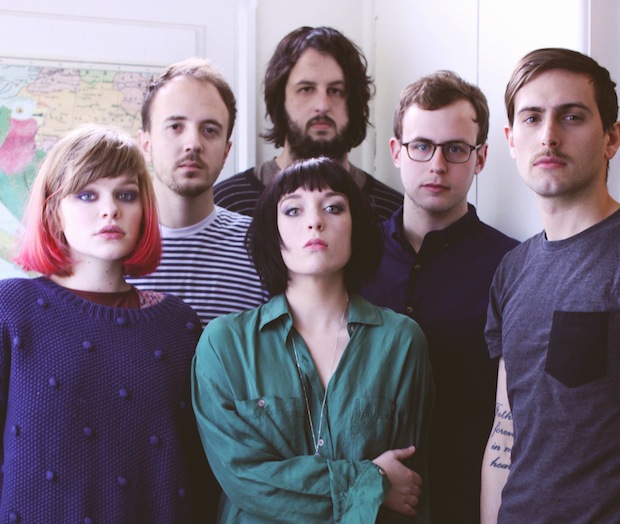 Melbourne-based band Alpine has been tiding their native country as well as making a splash in the States with their infectious, dreamy electro-pop music. The sextet is fronted by female vocalists Phoebe Baker and Lou James, and composed of Christian O’Brien (guitar), Ryan Lamb (bass), Tim Royall (keyboard) and Phil Tucker (drums).

Alpine dropped their debut album, A is for Alpine, last May, charming their listeners with crisp, fresh beats, haunting vocals and a spoonful of melodic tidbits. They've played SXSW for the past two years and have been stamping their sound touring both the U.S. and Australia. They swung by the Sonicbids headquarters in Boston to serenade us with a stripped down office gig, and we caught up with front woman Lou James to chat about the band’s career and how they got to where they are today.


Tell us a little bit about how the band came together.

We came together through friends of friends and lots of house parties that one day finally found us all in one room. But this house party in particular was a “jungle” themed party, and all of our costumes were terrible. I'm sure we were all aware of this, but everyone was too polite to say anything. You know those costumes when you're running out the door and think, "Ah, crap, I need a costume"? Yeah, those costumes. There are still some incredible photos lying around that pretty much sum up how random we looked together and today as a band we still do. I've always dug that about us.

For those who aren't familiar with your music, how would you describe your sound?

Our sound is such a hard one to pin down. Even with writing our second album, the Alpine flavor is starting to taste better and the sounds we're creating feel more courageous. So perhaps in order to answer your question, I’ll say melodic, synth pop, a little funky, a little fresh, female harmonies, sexy beats and a dash of honesty, which all comes to life in an explosive visual live performance.

What was the most enjoyable part about playing the office gig?

It was all about the vibe about that office gig—it was so delicious. Sometimes it’s hard to do intimate performances after touring in a small van for a few days leading up to it because you are a little smelly and perhaps not looking too hot, but thankfully this ended up being really special. I loved the snacks on the table and the pumpkin beer. We don't have pumpkin beer in Australia, so I was in shock for 20 minutes.

How do your songs come together? Are they written collaboratively?

The songwriting process always starts the same, and I think keeping with a process means you'll never stray too far away from sounding too much like a different band. Christian, the very tall man, is an incredible creative musical genius. He'll send Phoebe or myself a basic instrumental structure which may be something he's developed himself, something that's been fleshed out in rehearsal, or even something from soundcheck that he's been playing around with to which Phoebe or myself will say, "Love it, let's use that!" Then Phoebe and myself go to town working on some lyrics and melodies but do this separately from one another. In that sense we just go for it and don't hold back, and that's when the magic happens, because there's no preconceived idea of how we want a song to sound. We let that happen organically. The last thing we do is just jam together as a band. That's when everyone gets involved and there's a lot of improvisation and we can see the song start to come to life.

We really make an effort to write what we want to write rather than what we think is going to be successful.

What crucial steps did you take to get to where you are today?

The most crucial step we've taken is just working incredibly hard. Touring makes you tough like Hercules. We've done SXSW twice, and any band that does SXSW learns how to get on and off a stage in a matter of seconds. Last year was insane – we toured around the USA three times, played numerous festivals in Australia, and even jumped from one tour with Empire of the Sun in which we flew from New Orleans to Perth, Australia. That same night we began a two-week tour with Foals across Australia, and two days later flew straight back to the States to begin the West Coast stretch with Empire of the Sun. Amongst all that, vans break down, band members get sick, you can be disillusioned with jet lag, you can forget what day it is and who owns your own hands – but at the end of the day, when you get on stage and perform your little heart out and that adrenaline rush fuels you again, you realize you're a badass musician and one tough little cookie.

To bounce off of that, how has Sonicbids played a role in helping your career?

Sonicbids has really helped with our exposure, so as I write this I give them two thumbs up! To travel across the world and to have Sonicbids want to help share your music means the world.

What is the most interesting thing you've learned from being in the music industry?

The music industry is a tricky one to predict. There is no manual, so we work hard and perform like it's our last show every night.

What piece of advice would you pass on to up-and-coming bands?

I think being real is very important. I always think about how much music is out there, and we really make an effort to write what we want to write rather than what we think is going to be successful. At the end of the day, the songwriting process and the enjoyment of writing those songs is what gets a band anywhere, and the people who listen to your music will get that. In reality, there are no shows without the songs, there's no band without the songs, and there are no fans without the songs.

I also think that having a strong identity is really important, too. When we first started we had no idea what that was, but after our first album and touring in Australia and the USA, we had a better understanding. Knowing your identity is such an exciting prospect because it helps people to relate and get where you're coming from. Think of yourself as a little package.

What is your ultimate goal as a band?

Our ultimate goal? To be creating music for a very long time.

What's next for Alpine?

We're writing our second album, so laying low but not for too long. We'll be back in the States as soon as we can!