Spotlight On: The Lovely Bad Things 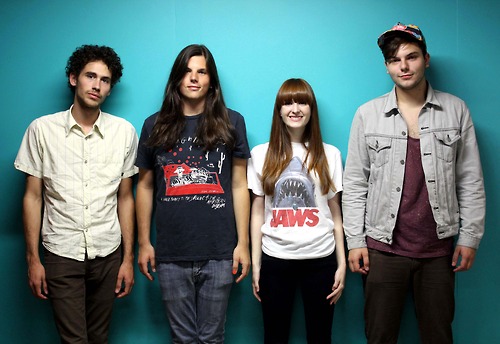 Orange County garage-punk quintet The Lovely Bad Things sound just like West Coast garage punks should — full of searing energy, hooks and cheekily literate songwriting. With their infectious drive and welcome affinity for The Pixies, The Lovely Bad Things — multi-instrumentalists Brayden Ward and brother Camron, Tim Hatch and Lauren Curtius — were a natural choice when Primavera Sound looked to book SonicBids artists to play their Spanish throwdown. Sonicbids recently caught up with the band to chat about the festival, their plans for the future and the Belgian guy who came all the way to the States to hear them play his favorite song.

Your bio says someone once came all the way from Belgium to see you play a special song. Can you share that story?

We were in San Francisco playing the Hemlock Tavern, and this dude comes out of the crowd screaming about "I Just Want You To Go Away." We had just finished playing it in our set, and he was really drunk and ridiculously excited, and he was saying "I came all the way from Belgium to hear 'I Just Want You To Go Away!' That is my absolute favorite song in the world! Play it again! Play it again! One more time!" So he starts getting the crowd riled up and we're like whatever, why not? So we played it again, and he bought us all drinks.

I'm a huge fan of Burger Records, their ethos, their bands, everything. I know you've worked with them for a cassette release. Can you talk a little bit about what it's like to work with them?

For a while we just kind of looked up to Burger in awe. They're the coolest people ever. How could you possibly even approach them with your music? What if they didn't like it? But before we knew it, we were bringing them the artwork for the cassette, and they were slapping the Burger logo on the spine, and it was a big warm feeling. They are honestly the best dudes ever. We can always come to them for advice with the band, which in this world can be hard to come by. Burger Records is like family now.

Y'all crowdfunded your trip to Primavera, and it sounds like you had a really great time there. Tell me about that experience.

To be honest, we don't really remember all of it. Jet lag paired with free alcohol for bands and the confusion of playing a festival in another country kinda left us all a little impaired. One of the better memories, though, is getting to the hotel in the morning and falling asleep, then being woken up later in the afternoon to The Cure sound checking. From what we all remember everything was great! And we are so happy that we were able to get over there and play. Also, stopping and talking to Bradford Cox every time we left and came back to the hotel was pretty amazing.

I notice a particular love of The Pixies, both in your music and in the way you talk about your music. What is it about that band that so moves you?

We all have somewhat similar music tastes, but we all have different favorite bands. Over the billion conversations we've had in this band about records and bands, The Pixies show up in all of our top fives. Its a band we all share a common interest in, and we didn't even really think about it until people started comparing us to them. After that happened we were all cool with that comparison and even ended up doing a full set of Pixies covers one Halloween. There might be some of it on Youtube somewhere. Learning their songs over the years has made us play things in different ways and made us better musicians.

Fill me in on what you guys have on the horizon for spring/summer.

Writing. We've been all over the country in our little van too long to make a new record, so right now we're just focusing on new material and playing a few local shows. After Burgerama III, we're gonna become hermits and just write a record. Other than that our spring/summer will be just like all the others: way too much pizza, way too many quesadillas, way too much time spent at our buddy Julian's house, way too much Mario Kart, and probably a little alcohol, cause we're adults and we can do that. Right?