As 2020 comes to an end and you think about your goals for next year, we've been thinking about how musicians have worked on moving their careers forward during the time of COVID-19. We reached out to a few different independent bands and artists to find out more about life as a performer during a global pandemic. This week we had the pleasure of chatting with artist ESS SEE about her experience and career.


ESS SEE is Brooklyn-based singer songwriter Sarah Carbonetti. Carbonetti began creating demos in 2009 alone in her bedroom at night—honing in on uniquely addictive and seductive melodies often featuring themes of identity, intimacy, and femininity. Embracing lyrical and visual influences St. Vincent, Emily Haines, Carole King, Jenny Lewis, Grace Jones and Lana Del Rey—ESS SEE delivers a heightened sense of vulnerability and intimacy in her songwriting. Her rich, often theatrical, live performances engage audiences with eye-popping costumes, humor, and an electric presence. Her debut EP, “Ordinary Woman” was released in 2017 followed by her 2019 debut album, “Waiting For The Sky To Fall.” 2020 has seen ESS SEE emerge as a producer with single releases “Overdrive” and “A Better Home.” 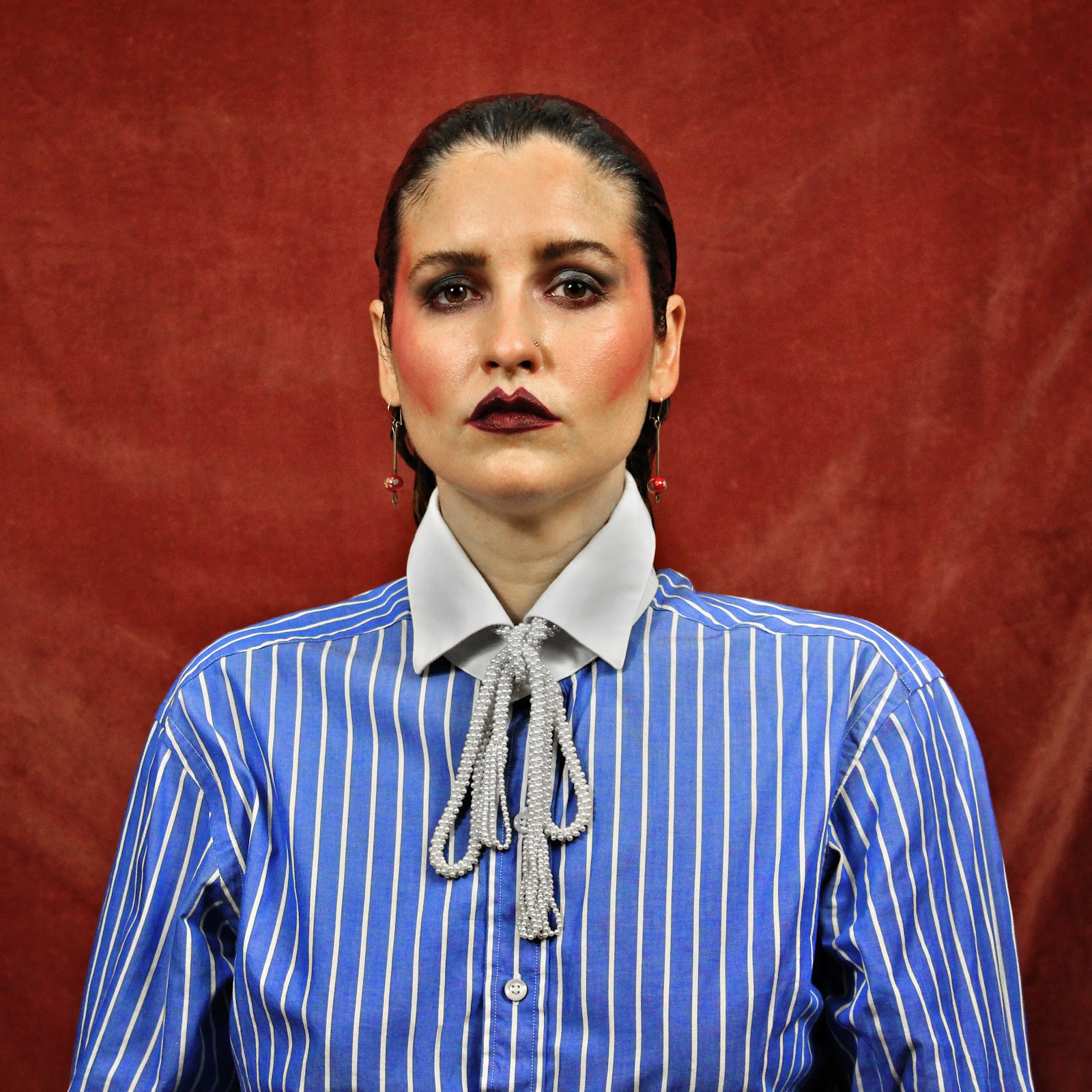 Has COVID-19 changed your perspective on making music?

Before COVID-19, I would make music in between playing a few shows per month around NYC (when I wasn't touring) plus working a full time day job. It was go go go all the time, and don't get me wrong, I loved it and very much miss it—but it was more difficult to manage time and find the focus to create new music and consciously evolve my sound.

But, now the world has slowed down and everything is different. I can sit with myself and find different avenues to making music. It doesn't feel like there are any rules anymore. During COVID-19, I've begun to fully self produce my music and so far have released two new singles: "Overdrive" and "A Better Home." I'm fueled equally by desire and necessity. Ironically, I've also begun to collaborate more with other musicians. Being isolated during COVID-19 made me realize how crucial community and connectivity is, and I want to reflect that in my music. I have more live players on these two singles than I've ever had in my music before, and it feels good.

How have you been connecting with fans during COVID-19?

I've been laying pretty low for the most part. I communicate with my fans on social media and e-mail. I've done one live outdoor socially distanced acoustic performance for neighbors that was really beautiful. I was able to meet new fans and share new music I'd been working on. Even though it was small, it was one of the most engaged and responsive crowds I've had in a long time. I think COVID-19 has brought people a deeper appreciation for music and the privilege of being together to listen live again. I hope that earnestness continues.

We noticed that your track “A Better Home” has been a brewing project, what was it like to release this piece of art after years of working on it?

I began writing "A Better Home" in 2016 amidst a lot of personal anxiety about the state of the world. I wrote the opening verse and produced it as an electro-pop tune. The working title was "Thunder," and it was pretty dark overall. I had no chorus and I didn't have full clarity on what exactly I was trying to say. The vibe wasn't feeling right, so I put it to the side..for four years.

As 2020 dragged on, I began listening to a lot of music from the 60's and 70's. Specifically, a lot of Crosby Stills Nash and Young, some Fleetwood Mac, Nina Simone, John Lennon etc. I think my listening choices were a combination of trying to find comfort in old familiar tunes, as well as an attempt to remind myself that times have been dark before, and we somehow made it through stronger and better. With newfound inspiration and a clearer mind, I went back to working on "A Better Home." I started over on the production, this time layering my voice to achieve the feeling of a collective of voices, an attempt to reflect that we are all in this moment together. Once I did this, the chorus came easily - and I realized it wasn't a song about anxiety and fear - but of facing darkness head on, the hopes and dreams of building a better future, and acknowledging the courage it will collectively take to achieve such a future. I wanted the track to feel super organic and human instead of tight and overly polished. I stripped down the electronic sounds and incorporated more acoustic parts including the addition of pedal steel played by Dan Iead, which was a first for me. There's a funky traveling bass line played by Mitch Friedman, a sixties inspired beat plus a few epic drum fills by Oskar Haggdahl, and of course, signature acoustic guitars played by Charlie Rauh--all finished off by the exceptional mixing of Albert Di Fiore.

Finally completing this song, and releasing it was like letting out a huge breath I'd been holding for years. I learned that sometimes you have to wait until you understand the full story before you can write the ending. And that just takes time. 2020 is the perfect moment for this song to finally be alive in the world, and I hope it brings people the same catharsis and hope for the future that it has brought me.

Who has influenced the way you make music most?

There are a slew of artists who have inspired me and influenced my writing, sound, and performance style. Jeff Lynne of Electric Light Orchestra, David Bowie, Lana Del Rey, Grace Jones, St. Vincent, Emily Haines of Metric, Carole King, Beth Ditto... But as far as me actually making music, it's much more intimate. I'm influenced most by my peers. My guitarist (a prolific artist in his own right), Charlie Rauh, has been with me since the beginning of ESS SEE and is a regular collaborator, huge champion of mine. Julie Kathryn of I Am Snow Angel, who produced my first full length album, taught me the ins and outs of the production process. My husband, Jimmy Carbonetti of Caveman is one of my main sources of inspiration, creativity, and support. For me, it's all about creative relationships, surrounding myself with people who believe in me—sometimes even more than I do. I'm lucky to have found a great crew of people to trust with my ideas and help me shape them into reality.

You did a virtual #Womxncrush Live On Tour event, what was it like participating in a virtual concert like as an artist?

When I was first approached to participate in the #Womxncrushmusic tour, I was psyched, but quickly realized I had a lot of nervousness about the idea of performing to people on a live stream as opposed to physically being in a room with actual people. In my opinion, live stream shows can often lack the magic of a live show. I decided I'd like to use the opportunity to try my best to recreate the magic. I wanted to give people a true ESS SEE show to the best of my ability.

For the show, I partnered with my friend, Chloe Daley who is an incredible set designer and my friend Jonathan Frey, a director of photography who has directed several of my music videos. We created a performance based off my set list of five songs in which I worked my way from a ridiculous almost clown like costume down to a very basic bare bones costume - all following the evolution of my music from more electronic to more acoustic. This was a new experience for me as an artist - to be able to fully control the performance environment instead of just jumping on stage at a venue. Through this experience I was able to share more of myself with my audience and invite them more into my heart and brain. It was definitely intimate and I ended up feeling more comfortable and connected to my audience than I had expected.

If you could give any piece of advice to your younger self, what would it be?

I would tell myself to get started earlier. I waited a long time to start making music professionally because I knew I had no clue what I was doing. Now, I realize that (outside of people being incredibly naturally talented) almost no one knows what they are doing at the beginning - we all just figure it out and learn as we go, and that's part of what makes making music so magical.

What platforms have you used to reach out to fans, have you learned any tricks with streaming, and have you been able to increase engagement? Have you run into stream fatigue?

I mainly use social media (instagram, facebook, twitter) and e-mails to communicate with my fans. I don't know any secret tricks to getting more streams other than submit to everything you can, reach out to curators you dig, and keep up your relationships with people. Remember your fans names and faces. Thank them for their support - it's so easy and also makes the whole experience feel more worthwhile to realize that your music means something to a real person. Be kind to people who come to your shows. I think sometimes indie artists look at streaming numbers and get discouraged when they are low compared to artists who are more mainstream. There's so much pressure to have high numbers. The truth is, for most of us, it's a marathon, not a sprint. And building solid lasting relationships with your fans, bookers, and people in the press who have given you opportunities you'll be in a better place to keep growing and maintain an audience across the lifetime of your career. I try my best not to worry about how many streams I have, and to instead work to evolve and create music that is true to who I am as an artist, and speak to the people who continue supporting me and sharing my music with the world.

Career wise, how are you planning out 2021? What hurdles do you expect and what goals have you set for yourself?

In 2021 I plan on releasing my first fully self produced EP. I intend to use what time I have left in 2020 and the rest of lockdown to finish writing some new material and continue to collaborate with other artists to finish the EP.

Like everyone else, I'd love to start playing live shows again. I'm not sure when that will be possible and I may need to push more into creating unique live stream experiences to share my new music with people. In the meantime, I'm not going to worry about it. If 2020 has taught me anything, it's do the best you can, and don't make any concrete plans.