We Tested 3 Amazing Guitar Combo Amps Under $1,000 So You Don't Have To

The warm, orange glow of power tubes. The thunderclap of a jolted spring reverb. The soreness in your hand from carrying an 80-pound brick by the leather handle.

I’m talking about guitar amps. Specifically, the reasonably priced combo amps that become the basis of your guitar sound, and the main thing that separates you from someone singing Harry Chapin’s “Cat’s in the Cradle” around a campfire.

The right amp should suit your sound, allow you to make artful noise without a row of stompboxes in between, and leave enough money in your bank account to get some pizza after rehearsal. I visited Downtown Sounds in Northampton, MA, to investigate the best guitar amps under $1,000. All the amps I tested featured single 12-inch speakers, so they were roughly comparable.

Like most full-service music shops, Downtown Sounds has an amp room to prevent amp-shopping shredders from driving everyone else out of the store. I was ushered into theirs by Downtown Joe’s minions and was delighted to find it appointed with guitar cord, guitar strap, a stool, and a two rows of amps already plugged in and ready to go. “Try the Supro,” said the store manager, nodding meaningfully.

Trouble was, the amp he was referring to (the Supro Jupiter) was tagged at $1,599, which I don’t consider to be “reasonably priced” for a combo amp. I was staring at an Orange Crush Pro that was listed at $499. Nonetheless, I decided to come back at the end and see what an extra $1,000 would get me. I plugged in my test guitar (a 1995 Fender American Stratocaster) and got started. 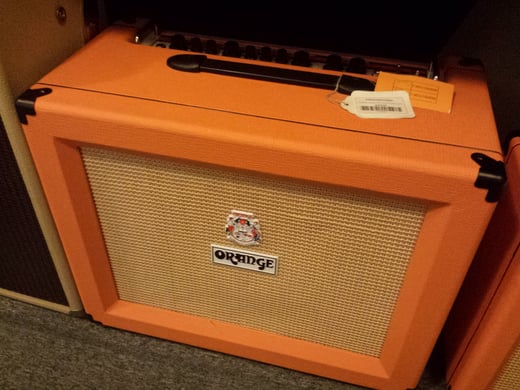 The Orange amp I was eyeing was the Crush Pro CR60C. This is not a big box, measuring just under 22 by 18 inches, nor is it very heavy, only about 45 pounds with a cord stuffed under the handle. The bright orange finish is pretty distinctive, as is the three-way reverb switch (hall, spring, and plate).

Since this is a solid-state amp, the amp snapped on instantly, and I was immediately impressed. Years ago, solid-state amps often gave you a sound that was clanky and gutless, but in moments I had some lovely tone ripping out of the single 12-inch speaker.

All three reverbs sounded great, and the onboard distortion was more than adequate for distorted soloing or power cord crunch. To my delight, the clean channel also boasted a gain knob and could get nicely dirty as well.

If there’s one downside to the CR60C (try saying that five times, fast), it’s the hum. Granted, I was using a guitar with all single-coil pickups, but this little monster hummed and buzzed hard, no matter which point of the compass my guitar neck was pointing to. It was notably worse than the other amps in the room and might be a bummer for studio work (although I doubt it would matter live).

Overall, what a great-sounding amplifier for $499! 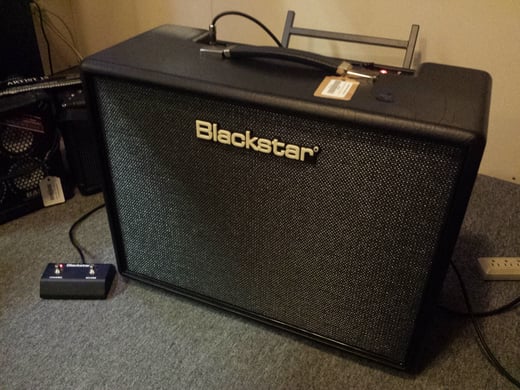 The Blackstar Artist 15 was up next, a 15-watt tube amp featuring the well-loved 6L6 tubes. This is a bigger, heavier amp than the Orange (although Blackstar doesn’t list its weight or dimensions on their site), and its tone impressed me as very clean, very noise-free, and very dry.

The onboard reverb sounds terrific, but offers a fairly limited palette of different tones and has a fairly short decay time. Like most of the amps in the test, the Blackstar features a clean, dirty, and master section, and I wasn’t disappointed with any of the tones I discovered.

One thing the Artist 15 does not provide is a great overdriven sound. At its dirtiest, this amp isn't very dirty... although, since it’s a tube rig, it would give you a lot more overdrive at much higher volumes (something I didn’t think the music store would appreciate). For the money ($799), I would have expected some more tonal options and a richer distortion, although this amp did give me lovely tube tone for $200 less than the Fender amp I played next. 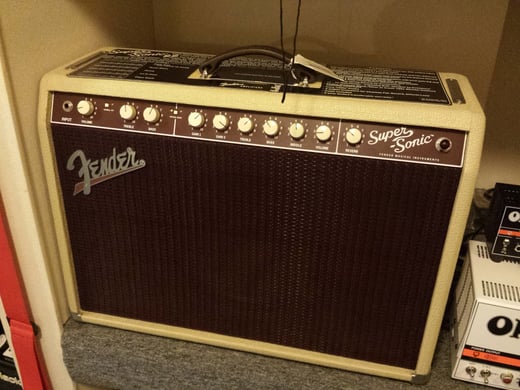 The Fender Super-Sonic 22, along with the Supro amp that concluded our test, looks straight out of 1963, but amp technology has come a long way since Jimi Hendrix turned a right-handed guitar upside-down. At $999 (a little less than the list price of $1049), the Super-Sonic is not cheap, but the refinement of this amp’s tone places it a step ahead of the Blackstar and Orange amps. It’s impossible to get a bad sound out of this Fender, and the glow of the red diamond-facet power lamp takes me back to Fenders of my youth.

This Fender boasts 22 tube watts of power and has the best crunch of any of the amps I tested, making it suitable for everything short of black metal without accessories. Fender’s long-spring reverb sounds like exactly that, with lengthy decay times but only one analog mode, unlike the versatile Orange.

This rig makes some noise, too, but not as much as the Orange amp did. When using the dirty channel, you have the advantage of two separate gain knobs, with the first adding distortion and the second adding “sustain and harmonic richness,” according to Fender. Rich, indeed.

That only left the expensive elephant in the room, that Supro Jupiter, and I have to say that this is a beautiful-looking machine, with its denim leather case and old-school chrome logo. For $1,599, I was expecting tone for days, enough to blow away the rather impressive bargain trio I’d just played on. That’s exactly what I got.

First off, this is a one-channel amp – no footswitch to step into a blazing distortion. The manufacturers assume you’ll get that from “a complex pedal rig” if you need it. This amp is specifically designed for performing pros looking for a vintage-style amp that will gracefully handle outboard effects.

On the other hand, who needs them? The Supro has such a low noise floor, you’ll wonder if it’s actually on, even at higher volumes. It features a gorgeous spring reverb that beats the Fender’s hands down, and doubles down with a magnificent onboard tube-powered tremolo. Like the Blackstar Artist, this all-tube rig is for stage players who use effects, but the Supro costs almost twice as much and sounds like it.

Overall, most any guitarist would be in good shape with any of these four options. All four are loud enough and sound good enough for most uses. Price is the main thing that sets them apart. Not a lot of people will be choosing between the Orange at $499 and the Supro at $1599, but if you can get at least $499 together, you’re going home happy.

Many thanks to Downtown Sounds for their hospitality.

Next up: Tube vs. Solid-State Amps: Which One Is Best for You?