The 10 Most Widely Influential Synths Ever 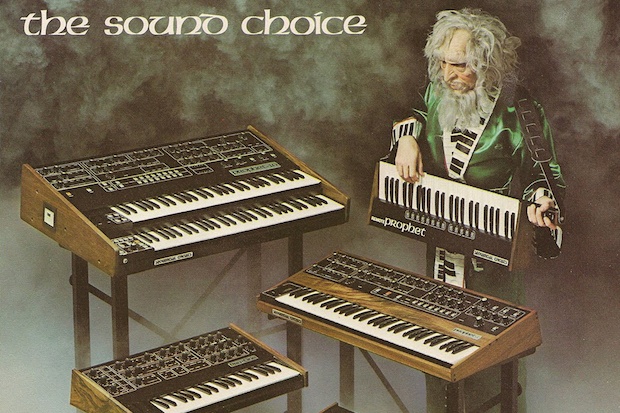 What is it that makes a synth special? Well, the answer is complex: many people have fallen in love with the arpeggiators on Junos; others, the sound of several stacked analog signal paths. Obviously, any article written about the synthesizer is going to be subjective; there’s no way around the fact that certain sounds sound better or worse to different ears. So caveat emptor: this list is subjective!

That being said, there are some synths that have shimmered through the noise, so to speak, and have distinguished themselves as true, influential classics. In this piece, I’ll take you through some of those, and explain just what’s so special about each of them.

In case you haven’t heard, Moog just announced that they will be reissuing their classic Minimoog Model D synth, and they’ve even started production on it during their Durham-based festival, Moogfest! So let’s start it off with this one, shall we?

Arguably the synth that started it all – the classic that put Moog on the musical map forever. In 1970, when it was first designed, synths were just starting to become popular instruments. However, many of them were modular, and at the time that meant expensive, cumbersome, and not ideal for replicable live performance. It also meant that the casual musician had a hard time understanding how to employ the synthesizer.

To solve these problems, Moog used many of the techniques from his giant modular synths to create a single-voice, or monophonic synth with an easy-to-play keyboard interface. Using three oscillators to achieve the famously fat Moog sound, the discrete signal path, and simple layout meant that settings can be recalled and easily recreated, gig after gig. It’s the philosophical backbone on which most non-modular synths have since been built. With one foot in the modular world and the other in the discrete synth world, the ARP 2600 remains one of the most sought-after vintage synthesizers. It was designed and sold as one unit, meaning that it was not truly modular insofar as one couldn’t replace an oscillator module with anything else. However, what it lacked in modularity it certainly made up for in sound design – with built-in effects, preamps, and internal wiring, you don’t even need to patch anything up to get going. However, most features of the synth are manually patchable to each other, so you can patch any of its three oscillators with noise generators, ring modulators… you get the idea.

The Korg MS-20, like the ARP, has a hard-wired signal path that can be bypassed or broken by a patch system. But that’s where the similarities end; the MS-20 is a much smaller, more portable monosynth whose distinctive filter characteristics and noise source make it a perfect pair for larger modular systems, as well as other synths that might require some character. On its own it’s very versatile, with the ability to go from noisy, percussive pops all the way to monster basslines. Unlike many of the other synths on this list, if you want to get your hands on one, it’s actually quite easy: Korg’s just released a reissue version of the synth that does the original justice. So far, we’ve seen synths that are groundbreaking for their ability to be discrete, and semi-modular – but one key element that’s missing in all of these is the ability to save parameters in memory such that they can be recalled at a later date. The Prophet 5 was one of the first to incorporate true storage solutions for patches, along with all the pluses of the groundbreaking Moog design. With five-voice polyphony – and two oscillators per voice – the Prophet 5 established a sound of its own, and can be heard on everything from the works of Kraftwerk to John Carpenter. The Oberheim and Prophet are, in many ways, partners in crime. Both emerged at around the same time, and were both among the first synths to incorporate memory. But that’s where many of the similarities end. The OB-Xa was available in four-, six-, and eight-voice models, and allowed for the storage of multiple voice configurations within the same parameters. The synth featured the legendary Curtis chips, which were notorious for their unique sounds and control. They also offered a filter whose slope could be switched from 12dB/octave to 24dB/octave, allowing for much sharper, edgy sounds. This synth is the sound of “Jump” by Van Halen, and was used frequently by New Order for their hollow, deep bass tones. Not one to be outdone, Roland entered the analog synth market strongly with their eight-voice offering, the Jupiter 8. With two oscillators per voice, and a visually distinct programming surface with sliders, the Jupiter was one of the first synths to feature an arpeggiator, something now considered standard. Because of the way the two oscillators cross-modulate within each voice, the Jupiter 8 has a distinct sound, one that resembles pulse-width modulation to square waves, but across many different wave forms. This is one of the most sought-after vintage synths, being used to great effect on several Tame Impala albums, as well as many classic synth-heavy albums from Tangerine Dream to George Duke. In contrast to the synths that have come before it in this post, the DX7 is (gasp!) digital. It was the first synth to have an architecture entirely based upon FM synthesis, which was made much more reliable and replicable on a synth-wide scale by going digital. Though this synth is notorious for its difficulty to program, it rewards patience; the percussive and metallic bell-tones that are possible with quality FM synthesis are unlike anything else. Oh, and it was also one of the first MIDI-compatible synths! Released in 1982, the 303 was originally intended as a bass companion for the 606 drum machine, but in its time was relatively cheap and not that successful. However, over time, with its intuitive step sequencer and signature filter sound, it became the go-to synth for acid house and techno producers – and remains one of the more elusive synths on the vintage market today. It’s one of the earliest synthesizers to function exclusively via programming, so it is not a performance synth in the traditional sense. You need to program a pattern into the sequencer to get any sound out of it. But once you do, you’ll immediately recognize the sound of everyone from Fatboy Slim to Aphex Twin. This choice may prove the most controversial on the list – many vintage synth buffs claim that the Juno-60, the older Juno model, has a punchier, fuller sound. But what the 106 might lack in punch it makes up for in functionality. Its MIDI integration was far and away the most advanced for its time, with 16 MIDI data channels, which makes the Juno slot in very easily to any modern studio setup. It also has up to a 128 patch memory, allowing users to store almost anything they’d like, making this synth very tourable. The last synth on the list isn’t actually technically a synth – rather, it’s a system of modules that come together to form a synth. Doepfer was the original modular synth manufacturer to adopt the Eurorack standard, an industrial scale meaning that modules could fit into racks in a much more compact fashion, unlike the older 5U or bigger models that would take up entire studios. This smaller, easy-to-manufacture standard has launched a modular synth boom that continues to this day and has influenced electronic music away from mainstage EDM and into more experimental territory. With over 100 modules on offer to replicate any synth functionality (and then some), Doepfer still leads the market in simplicity, efficiency, and affordability.

Myles Avery really likes music. He's nerdy about it, enjoys listening to it, and loves making it. Originally a classical trumpeter, Myles expanded into jazz and electronic composition at Wesleyan University, and is currently working as a freelance composer and producer. He has worked with several NYC and Chicago-based hip hop artists, including E.Oks, Josh The Word, and Ric Wilson. He leads production and recording sessions at The Bunker Williamsburg, Mission Sound, Spaceman Sound, Degraw Sound, and Headgear, among others. Myles also composes and performs for his own electronic ensemble, Strada, that sits between the worlds of algorithmic looping and analog synthesis. You can hear all of it on his SoundCloud. Keep up with Myles on Facebook, Twitter, or email.