The Critical Difference Between Gain and Volume 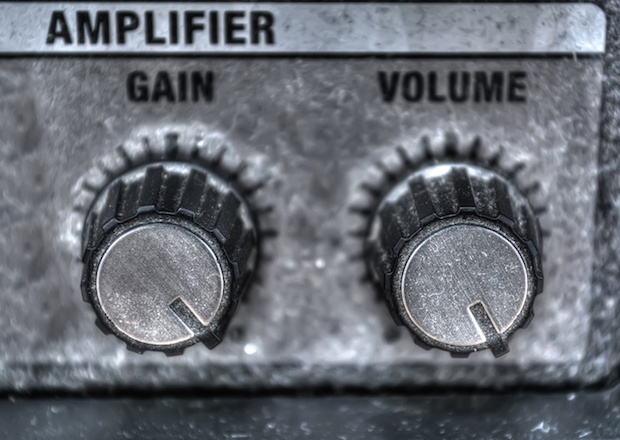 Let's say you're at a show or rehearsal and you turn to your amp, or perhaps your mixer, and you need to make something louder. You'll more than likely be confronted by a set of knobs or maybe even a fader that might have any of the following labels: gain, trim, level, volume, master, or a similar moniker. So which one are you supposed to reach for and when?

The difference between gain and volume, in particular, confuses many people. As is my usual goal, I'll hopefully help to clear things up a little for those of you who may not fully understand what each knob accomplishes.

In general and in its simplest form (I say that because sometimes these terms get somewhat misapplied in miscellaneous circumstances), gain is the parameter for the amount that some sort of amplifier circuit is going to increase the amplitude of an input signal (amplifier, amplitude… I think I see where this is going). Usually when you're adjusting gain, you're manipulating some sort of preamp and how it's going to handle the incoming signal. Typically, gain is the control for what comes "in" to a piece of gear.

Volume level, or loudness, is typically manipulated by a knob or fader of some sort, and this affects the output headed from that channel of the mixer to whatever bus you've assigned it to, whether that's a group, an aux send, or the master bus. In the case of your guitar or bass amp, it's affecting the power amp level. Typically, volume is the control for what comes "out" of a piece of gear.

A simple and relatively visual way to think of these from a mixing perspective is that your gain is going to be your sensitivity. Need a mic to be more "sensitive"? Turn the gain up. That being said, this is usually a "set and forget" setting. If you're mixing via the gain knob, you're doing it wrong, save for making on-the-fly adjustments in the live environment. Your balancing and level control should be done via the faders or knobs assigned to that function.

Another reason to not ride your gain control is that as you increase the gain, your noise floor will increase with it. This is the audible noise of a signal, usually self noise of components in the signal chain. Ideally this noise floor will be below the threshold of hearing, but as you bring your gain up, this floor comes with it. When relating to amp settings, your gain or drive is going to control how hard that signal is hitting your preamp; this is where your "overdrive" will come from as you literally overdrive the preamp stage. This should be adjusted for tonal purposes, and then your level or volume control should be used to increase the level of the power amp to actually bring your signal to the volume desired. Again, doing this the other way around can bring unwanted noise into your signal.

What about gain staging?

Another term that gets kicked around is "gain staging." What does it mean? Why is it important? Gain staging is, in its basic form, making sure that the level of signal at each part in your signal chain is adjusted or "gained" appropriately. This is more important today in the digital age than ever before. With analog setups, overdriving the input gain often (but not always) results in that ever-so-sought-after "saturation" of the sound. (This is actually a form of distortion, but a pleasing one.) Digital is a cruel and unkind mistress; when you run out of bits to store data, the result is brutal, anharmonic clipping. While analog can be more forgiving to some extent, the practice of proper gain staging is just as critical as ever. Not enough gain earlier on in the chain, and you'll have issues with your noise floor as that noise is amplified further and further down the line. Too much, and you'll soon be living life in the red. This is another reason that you shouldn't "ride" gains, whether you're recording or mixing live: as you change gain at one part in the chain, it creates a sort of butterfly effect as you go down the line. Adjustments in perceived volume should always be made via the fader or assigned level control.