The Number-One Skill Artists Need to Get Organized 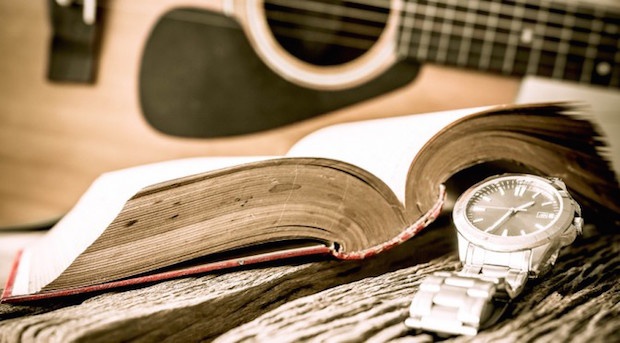 This article originally appeared on the TuneCore Blog.

The most essential organizational skill for a DIY musician is time management. Organizing your data and your belongings are important, too, but those also require first organizing your time. If you get to the gig 30 minutes before load-in and your gear is tangled and strewn all over your vehicle, you’re still better off than if you show up tidy and inventoried and 30 minutes late.

Being cluttery stresses you, and you can fix it when you get fed up with it. But being late stresses the venue and can burn bridges that you won’t be able to repair. Taking control of your time is your most urgent objective.

Time is like money. They’re both forms of currency, and often one replaces the other: If you don’t have money, you’ll have to spend time. When you’re indie and still developing, you don’t have the money to pay for everything you need, so you do it yourself: You spend your time. Once you get some money, you start paying people to do some of the work for you: You buy back your time.

The big problem with time as a form of currency is that it’s limited. On one hand, it’s great that you automatically get 24 hours every day. On the other hand, there's nothing you can do to receive more time. It's literally impossible.

Think of all the language we have around this: make time, find time, stretch time, gain time, save time. These are all illusions. You get the same amount of time as everyone else, on the same schedule, in the same increments.

This illusion of a bottomless well of time is a major pitfall for ambitious indie artists. You go to a workshop or read a book or meet with a consultant, learn dozens of great ways to grow your music business, get all fired up and motivated, and tell yourself you’re going to do all of those things. All it will take is dedication and self-discipline and focus, and you have those qualities, so you can do this!

No. You can’t do all of it. The math doesn’t work. Enacting every great idea would take more hours than you have. You must choose the best ones that will fit your time budget.

So the first thing to understand is that time is like money: it’s finite. Next is recognizing that, of your already limited time, you only have authority over a portion of it.

All of your time is either externally or internally controlled. Externally controlled time is governed by forces outside of yourself: other people or circumstances or simply realities you can’t change. Sleep is a great example: it’s a requirement of survival, so you have no choice but to spend about a third of your life doing it. Other examples are the hours you must spend at your day job, or at school, or commuting, obligations that you really can’t afford not to fulfill, plus the minimum amount of time it takes to run your life (eating, showering, doing chores, etc.).

The time that you’ve voluntarily committed to someone or something else is also externally controlled: It’s life-balance things like playing in a sports league or taking a regular shift at the animal shelter, but also all of your music-related commitments: rehearsals, performances, recording sessions, media appearances, songwriting circles. Anything with a deadline or a schedule becomes externally controlled as soon as you promise to do it.

Internally controlled, or self-controlled, time is what’s left. It’s what we tend to call “free time,” which is ridiculous since it’s obviously not at all free or cheap. Start with 168 (the number of hours in a week), subtract all of your externally controlled time, and you’ll probably be shocked at how few hours remain. For most people, it’s only about 1-3 hours per day.

Your internally controlled time, the time you get to use exactly how you want to use it, is a scarce and precious resource. And as a DIY musician, it’s all you’ve got.

You can’t always know which time expenditures will pay off. Most of what you do will, at best, contribute in some small way to moving the entire operation forward. At worst, it will knock you back.

There's a theory called the Pareto Principle, aka the 80/20 Rule, that tells us, on average, 20 percent of any category is the really valuable stuff, and the other 80 percent is of less value. Some people take this to mean that 80 percent of everything is crap. That’s an exaggeration: the 80 percent isn’t all useless. Some of it is, but most of it is just less useful.

Applying the 80/20 Rule to time, you can expect that about 20 percent of the time you spend working on your music career will pay off the most. The other 80 percent will either be necessary but no-glory work or mistakes that waste time.

The problem with the 80/20 Rule is that it’s hard to predict which 20 percent of your time will produce the big rewards. However, if you’re making well-thought-out choices about how you spend your time and keeping track of the results, you’ll become better able to anticipate how to budget your precious few self-controlled hours.

I know this is a lot to digest and it can be discouraging at first. Don’t throw in the towel; you can make this work for you! For now, start thinking about time as a resource like money: recognize its limit and pay attention to how you’re spending it.

Next up: 5 Easy Organization Tips for Musicians That Make a Huge Difference

Debbie Stanley is the owner of Thoughts In Order and has been helping chronically disorganized clients get their act together since 1997. Her most recent book, The Organized Musician, was released on September 20, 2016.