The Quick and Dirty Guide to Cables for Musicians 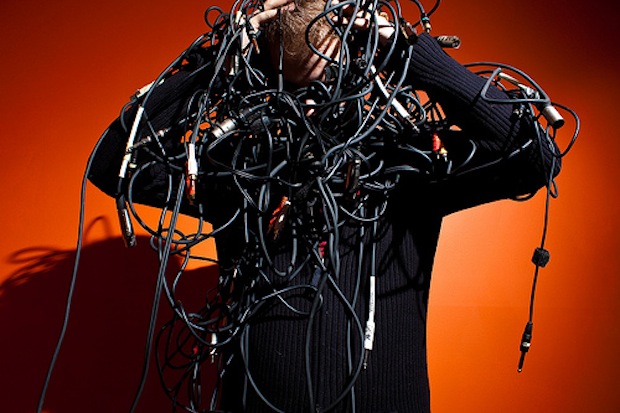 The rule of thumb for the importance of components in your signal chain is pretty much an upside-down pyramid. The closer you are to the source, the greater the part quality tends to play. There is one common element that links all these components, however: cables. 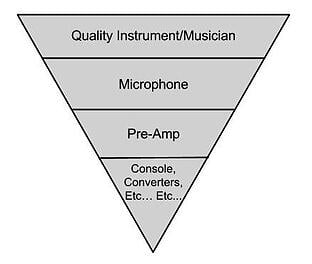 The aforementioned upside down pyramid.

Whether you're putting together a live sound rig, a guitar pedal board, or a home studio, your setup is only as good as your weakest/cheapest cable. While this may sound like a ploy to sell more expensive cables – and I'm not talking about the debate between whether you hear the difference in a $25/foot silver cable versus traditional copper – there's a marked difference between a quality cable and your bulk "store brand" cable.

There are few things worse than having the energy of a live show curbed by an intermittent connection in a guitar or speaker cable, or an ongoing witch-hunt through your gear to figure out where that strange buzz is coming from while trying to track that great song idea. You may not even realize the tone you're getting if it's being robbed by a poorly made cable. Budget-shielding, cheap, generic connectors and shoddy solder work are a great way to sabotage your investment in high-end instruments and boutique amplifiers. Before we dig into the specifics, let's go over some common cable and connector types and their uses.

Cables that carry audio signals can roughly be divided into two different camps: unbalanced cables and balanced cables. Unbalanced cables are the most basic method of transmitting signals, as they're all you need for audio (two wires). In the case of instrument/audio cables, an unbalanced cable consists of one "hot" wire to transmit signal and a shield: 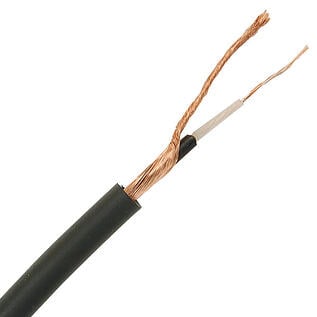 Or, in the case of speaker cables, two pairs of wires without a shield: 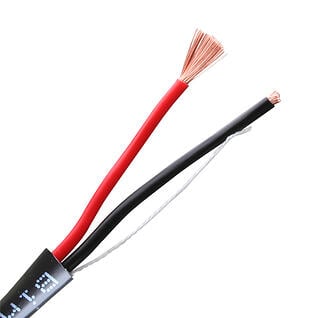 Both of these unbalanced cable types can fall victim to noise and interference because of their design. Every cable at its core (horrible pun absolutely not intended) is just a piece of metal, and nothing is better at acting like a radio antenna than a big, long piece of metal. This is why it's especially important that balanced cables are used for runs of any considerable distance to avoid unwanted noise, degradation, or interference. 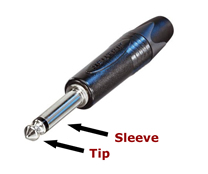 This is probably the most easily recognizable and common connection type in any musician's arsenal, and has remained almost unchanged in design since its invention for telephone switchboards in the late 1800s.

This is often found in consumer home audio equipment and turntables/DJ audio applications. This same connector is used in S/PIDF (Sony/Phillips Digital Interconnect Format) protocol. Despite the RCA connector, S/PIDF is a method of transmitting digital information and not audio signal.

On the flip side, an instrument cable should not be used as a replacement for a speaker cable. The high-voltage signal is going to try passing down the sole wire and the shield. While at low levels this may work as a short-term solution, at higher levels your sound will distort as the signal struggles to overcome the resistance. In addition to this, as a byproduct of the resistance, your cable may actually start to heat up. This could actually melt the insulation itself and result in an electrical short, or worse, the damage of your amp or cabinet.

Though these may look similar at first glance to their instrument cable cousin, they couldn't be more different on the inside.

A twist-lock connector that provides a secure connection and come in multiple lead varieties to run multiple pairs of speaker signal down the same cable.

Usually used in installation situations, or where amplifiers are in a rack and the physical connection to the amplifier is not being manipulated on a regular basis. This type maintains a low profile, and is cheap and easy to install and remove. They're not, however, particularly robust connections, so they should be avoided where cables need to be plugged and unplugged with any regularity.

Balanced cables are made up of three wires: two pairs carry the same signal, one with the opposite polarity, while the other one connects the grounds and shield. Like so:

Very similar to our standard unbalanced audio cable above, with the addition of one wire. The advantage in this setup is that devices connected via a balanced connector can "decode" the signal, which "ignores" any interference on the receiving end. Assuming an interfering signal will affect both cables the same way, its presence is canceled out in the signal when "reassembled." This is why almost all connections in a pro-grade live sound or studio setup will be balanced cables.

Some common connector types are: 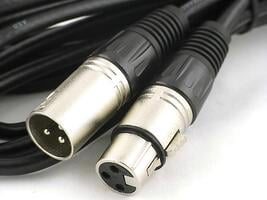 The other most common cable in the average musician's arsenal, the XLR needs almost no introduction. They come in multiple pin configurations: the three-pin "mic cable" being the most common. They've also been adapted for transmitting lighting control data and AES/EBU digital audio. 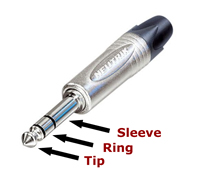 The TRS is incredibly similar to our TS version seen earlier, with the addition of the "ring" element for transmission of the signal in our second wire. Commonly used for connecting balanced audio signal where a low profile is desired (backs of consoles, patchbays, etc.), these plugs are also used in stereo cables for headphones where carrying two discrete signals down the same cable is required. 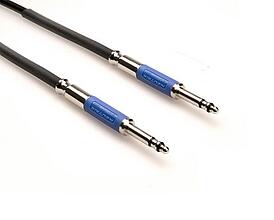 TTs are basically just miniature TRS cables usually used in studio patchbays to save space, as you can fit up to 96 connections in a standard 19-inch rack.

Other common types of cables

You'll probably run across these at some point in your musical travels, especially if you plan on putting together your own home studio:

Short for musical instrument digital interface, these cables typically carry control data from some sort of keyboard or controller to be utilized by another device for either generating sounds or manipulation of various parameters. Despite some misconceptions, these cables carry no audio data. 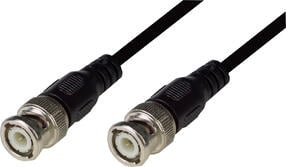 These are coaxial cables (very similar to your home cable TV connection, for those of you who are still into that sort of thing) with a slightly different connector type – the British Naval Connector, to be exact. In the audio realm, this has become the de facto cable for transmitting Word Clock time code to sync the clocking of various digital devices. 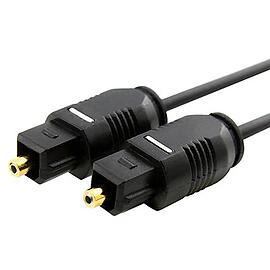 Originally developed to transfer audio between ADAT machines (ahhhh, 1993, when digital audio was in its middle school years), the Lightpipe protocol has stuck around, unlike the ADAT itself, and remains a standard method of digital audio transfer.

Not all cables are created equal

Now, returning to the earlier point on cable quality, unfortunately not all cables are created equal. Some people go with the "copper is copper" argument, and audiophiles will frequently debate the merits of "oxygen free" and various core constructions, but quality components and construction are paramount regardless of what side of that debate you're on. You can argue about whether you can taste the difference in a burger made from ground chuck versus one made from Wagyu, but both camps can agree that you need to have a well-cooked and constructed burger with quality condiments. Unless you're making all your own cables and hand assembling and selecting components, it's important to find a company that takes the same care and that stands behind their cables. Cables are not the place to use Kevin James' "38 pairs for a dollar" logic. Some brands I'd recommend are:

Oh, and one last thing: wrap your cables properly. I think I literally feel pain every time I see people wrapping their cables around their elbows. It does make a difference: your cables will last longer, and your investment will go so much further! Check out this video for proper cable-coiling protocol: