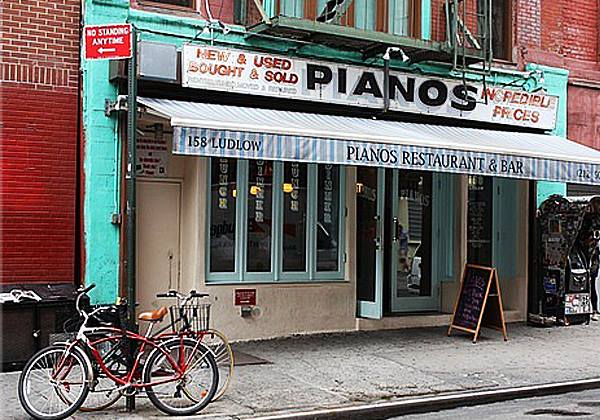 Pianos on the Lower East Side is a stellar spot for up-and-coming artists. (Image via theroadsouthern.com)

Everybody knows New York City is a hub for budding artists, but does everybody know which venues cater to musicians who are still building a fanbase? Each plays a crucial role in the independent music scene, and scoring a show at any of them can provide a big push to your career. Learn more about these spots below, and if you think your act is a good fit, give it a go. All of them are open to booking inquiries.

Shows at this 21-and-up venue take place seven days a week on three different stages. Its backline is impressive – there's even a different baby grand piano designated for each stage. The sound is so great that it's not uncommon for an artist record a live set at Rockwood Music Hall for a physical release.
Why it's great for new bands: Because it's open every day, there are more opportunities to get booked. And the variety of music is vast, so it's not a place that singles out any specific genre.
How to get booked: Requests are received at info@rockwoodmusichall.com. Read the rest of the rules here.

Located on Bleecker Street in Greenwich Village, this historic venue opened in 1961 and claims to be the oldest rock 'n' roll club in the city. Can you imagine what it was like during that era? Actually, the folks who run it keep it very much the same as its early heyday – both in appearance and vibe.
Why it's great for new bands: This spot is where a lot of huge artists performed as they built their own fanbases. Think Bob Dylan, Neil Diamond, Jackson Browne, Stevie Wonder, Norah Jones, and Lady Gaga, just to name a few.
How to get booked: Emails with an EPK can be sent to info@thebitterend.com. They accept hard copies by mail, and phone calls, too. See the details here.

This is a go-to spot on the Lower East Side if you're looking to catch local and touring acts at reasonable prices (both door and drinks). There's a showroom and an upstairs lounge, where performances by artists of all types happen every day of the week.
Why it's great for new bands: It's one of the venues that hosts CMJ showcases, so you know this place is on every journalist's and label's radar.
How to get booked: Email is the preferred method of contact, and interested artists should touch on their plans for promotion. Read the specific instructions thoroughly here.

Tucked inside B.B. King Blues Club in Times Square is this hidden gem of a venue, where local and touring acts have been performing with no cover charge since 2000. Established acts play the main area, of course, but Lucille's – named for B.B. King's guitar – hosts rising artists nightly.
Why it's great for new bands: Because of the well-known performers who've played the main stage, its location, and the fact that it's free to get into the smaller area, the venue boasts both a great draw and accessibility to all. (Some late-night shows are 21-and-up, though.)
How to get booked: Fill out the booking form on the club's website.

Some of the best up-and-coming independent bands and artists play at this super popular spot. It's even a hit with underground icons, like Captain Sensible, who hung out there just days ago ahead of the Damned's Halloween show at Irving Plaza. There's a 200-capacity main room, plus an upstairs area with room for 50.
Why it's great for new bands: All things considered, playing either room at the Bowery Electric is a pretty monumental notch in any indie artist's belt.
How to get booked: There's one contact for the main room and two bookers for the Map Room, each of whom works with a specific genre. Check out the details here.


Always remember to read all of a venue's instructions when contacting about shows. If you don't get the gig you want, peruse this post for help.