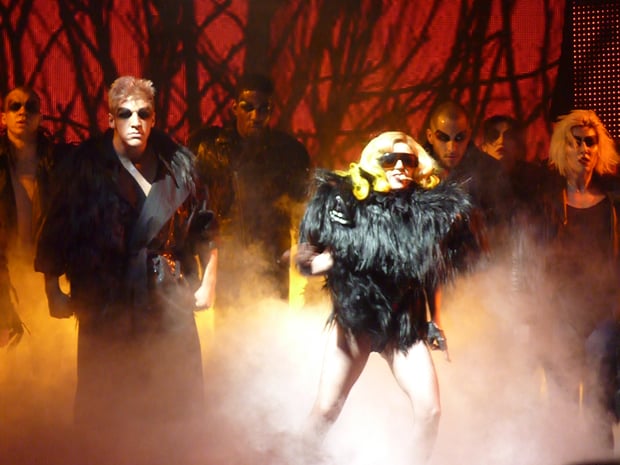 Certain lyrical themes recur over and over in songs, and most listeners don’t mind as long as the material is well written. Rappers bragging about their wealth? Metal singers feeling like lonely outsiders? A spurned lover, watching a former flame carrying on with someone else? These feelings and scenarios have given us so many great songs. But every now and then, inspiration strikes from a different direction, producing a song that’s so far out that it has to be based on real life. After all, nobody could make this stuff up... could they? For this list, we’ve focused on lyrics that tell a unique story – and lyrics that we can actually understand.

Members of the band differ on their exact explanation for this one: it might have been about the band manager’s encounter with a transgender woman at a bar, or it might have simply been about the funky gay and transgender-friendly bars the band hung around in, but all agree that it involves meeting a woman in a bar then finding out she’s a man. This song seems particularly far ahead of its time today: it was released in 1970.

If you're a songwriter and something interesting happens to you, others will be interested in it, too. Write about your real-life adventures, and people will feel the authenticity.

Like many of their tunes, this one is goofy on the surface and deep underneath. Two hipsters conduct an artsy flirtation in a slick urban bar. But before our narrator learns what this interesting woman is all about, she has a nervous breakdown and is whisked out of his life. In her honor, he will "lash out dancing like a madman" while she’s recovering.

You can play with incongruity. In other words, sometimes dark lyrics are paired with upbeat music. Sometimes serious topics are spiked with humor. Maybe you, as the writer, have mixed emotions. A mashup of different tones, musical and lyrical, can help express that.

The late songwriting genius almost never threw his fans a straight ball. After all, this is the man who wrote "Werewolves of London" and "Roland, the Headless Thompson Gunner." Here’s another oddball topic from Warren about a screw-up rich kid getting in big trouble in South America, and calling on his father to send the three items mentioned in the title.

Use proper nouns. Maybe you've never been to Honduras or Havana, but hearing them mentioned certainly conjures images and feelings in listeners. Of course, those who have visited those places will find these references even more powerful. It's lyrically stronger to sing about "the tall cactus in Tucson" than just "the desert." Specificity is more evocative.

4. "Love My Way," The Psychedelic Furs

People can debate the meaning of lyrics all day, and the truth is that many have no defined meaning. This is not one of those. The imagery is too vivid: fascism, and a "New Wave" of ideas that supplants it and eventually becomes just as rigid and violent. An amazing theme for one of the most richly atmospheric pop songs of the '80s.

Find your threshold of vaguery. If you listen to the lyrics of a band like the Furs or even Duran Duran, you can probably name the topic but the details are fuzzy. Sometimes this suits your voice as a writer. Sometimes it's unintentional. If you're writing a song about gardening and everyone thinks it's about pot smoking, it might be time for a rewrite.

Favoring political topics over songs about chrome rims and expensive watches, PE never came up with a more inventive take on race and class than this one: an accusation that ambulance drivers took their time getting to poor neighborhoods, allowing victims of color to bleed out. And it’s so catchy! No wonder one magazine went to print with this headline: "Flavor Flav: Genius or Joker?"

Make your audience think. Like a good reporter, Flavor Flav is clueing his audience into a problem most of them didn't know about. As a writer, you have the power to inform or to make people see things in a different way. Don't waste it!

Next up: When, How, and Why to Break the Rules of Songwriting