When Less Is More: 3 Reasons Why Smaller Arrangements Can Make Your Tracks Sound Bigger 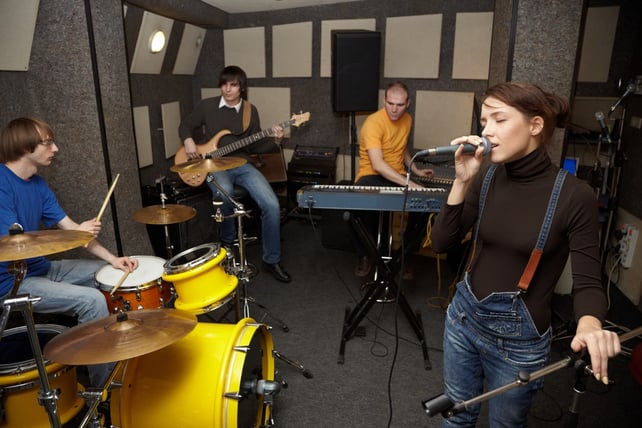 Everyone wants their studio tracks to sound “huge.” In an effort to achieve “hugeness,” many of us follow the obvious path of adding more and more things to our arrangements. If two guitars sound big, then four guitars should sound even bigger, right?

While this makes sense in principle, the results can be paradoxical; often what we achieve by adding more elements to a track isn't a bigger sound but a smaller one.

How does this work? Here are a few examples of some situations when removing elements from your tracks can lead to a fuller sound.

If you’ve spent any time in a recording studio, you’ve probably heard a lot of talk about phase issues. Phase issues arise when two or more similar sound sources hit a microphone or a set of speakers at slightly different times (slightly being the operative word). Rather than sounding delayed or out of time, a sound that's out of phase will sound thin or filtered.

Say, for example, you have a kick drum that sounds nice and full on its own, but that’s lacking in high-end energy. A common way to solve this problem would be to add a sampled kick drum with more high-end sound on top of the existing kick track. Both of these tracks might sound great independently, but when you play them together, suddenly your kick sounds weak and thin.

If this happens, it’s likely because the two kick-drum sounds are out of phase with each other. To fix this, you may have to either flip the polarity of one of your tracks, or manually line up the transients to make sure they start at the exact same time.

This same issue can come in to play with other types of doubled tracks such as doubled guitars. Turn that into tripled or quadrupled guitars and you’ve got all sorts of potential phase issues on your hands.

While you may be able to fix phase problems during mixing, an easier way to achieve a fuller sound may be to simply cut back on the number of doubled tracks you use.

The problem is that you have too many sounds occupying a similar frequency range. While you may be able to use some EQ to create more clarity between these sounds, a more effective way to create clarity is simply to remove tracks that are too close to each other sonically.

Whoever said, “There can be no light without darkness” probably didn’t have music production in mind when they said it, but the quote certainly applies in this context. Simply put, if every part of your song is big and loud and full, then it'll cease to sound big and loud and full and will instead sound small and quiet and thin.

Why? Because in order for something to sound big, there needs to be a contrast between the big parts and the small parts. Sometimes simply muting one or two instruments in a particular section (usually a verse) can make the next section sound much bigger by comparison.

You may feel like this brings down the energy level of your song at first, but when you bring those muted parts back in, you’ll realize just how much more energetic the song sounds as a whole.

In a digital environment where anything you can dream of is possible to achieve, sometimes it’s worthwhile to step back for a moment and ask yourself if you really need all of these options. Sure, you could create a kick drum sound using six different samples stacked on top of each other, but how many great drum recordings have been made with just one simple kick drum track?

The next time you’re thinking about doubling up another guitar part or adding another synth track, ask yourself if the element you’re about to add will really enhance the song, or if it'll simply distract from what’s already there. You may be surprised to find that, more often than not, leaving something out will have an even greater impact that adding something in.