Why Perfectionism Is Toxic to Your Music Career 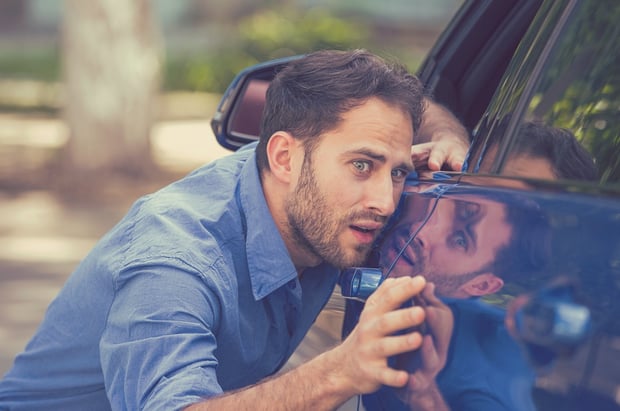 First, it's your car. Then, it's that verse that won't stop nagging you. (Image via Shutterstock)

Musicians are told time and time again that there's more to music than playing each note perfectly. It's not a competition to see who can play more in tune or more accurately than someone else, yet that concept still eludes many players to this day.

This is quite understandable, though. After all, who wouldn't want to be perfect? Being perfect means you would be the best at your given instrument and sought after all over the world. From a logical standpoint, this method of thinking makes sense, but it's also where a lot of musicians get sent down a dangerous path.

Music has mathematical elements, but that doesn't mean getting the equation perfectly right translates to a better performance. In fact, one of the most important lessons one can learn about performing is letting go of perfectionist tendencies that burden the psyche. It sounds like the opposite of what you learned in music lessons, but chasing perfection is a waste of time. It's no more real than riding unicorns or Santa Claus. Perfection is a myth, and the more you try to chase it, the more mythical it actually becomes.

The truth is that there's never a point at which one should stop improving his or her craft. Some musicians don't understand this and chase that fleeting myth of perfection, only to fall short. When they don't obtain it, they criticize themselves and ultimately hurt their career.

Now, this isn't to say you should give up on improving. Quite the opposite, actually. Think of music education as infinite. It can never be entirely mastered or perfected, but you should always give it an effort. If you're a perfectionist, however, you can still excel at music – it just might take some tweaking on your part.

The doors of perfection

As previously stated, opening the doors of perfection is an endless chase that will only end in disappointment. The more that a musician focuses on the technical aspect of perfection, the more anxious he or she will become. This is because all the focus is on perfection alone. There's nothing else.

Also, deep inside, you know that there can't be a perfect performance and that you'll mess up, even in the slightest of ways. This is another route to anxiety. This stress will never go away unless you change the definition of perfection.

It's entirely possible to "move" an audience with a less-than-perfect performance. Some audiences don't care about technicality at all; they'd rather see raw emotion put into the music. Take the Ramones, for example. Their whole schtick was based on that concept. A three-year-old could probably play the majority of their songs, but that didn't stop the Ramones from becoming one of the most influential groups in music history. Alternatively, a soulless prog band could put an audience to sleep with their well-rehearsed landscape of complex arrangements.

Of course, each audience is subjective, but no matter what type of music you play, perfection won't be achieved, so it's best to focus on delivering the best possible product without sacrificing your sanity.

Playing to the audience

Let's talk about the inspiration of perfection for a second. Do you strive for perfection on your instrument purely for self-satisfaction? Do you spend hours mastering something just to lock the guitar in your room and never show anyone? Perhaps there are a few of you out there, but for the most part, people pursue perfection so they can impress the audience.

This line of thinking does have some good points. Entertaining the audience should be a priority in a show, and it's true you have a responsibility to them. However, this responsibility is less complicated than some think.

The only responsibility musicians have to the audience is a play to them, not for them. It's the job of the musician to get onstage and give their most truthful performance possible. From there, it's up to the audience to figure out whether they like it or not. Many of them will, just as many of them won't. That's an uncontrollable element of music.

The best you can do is take a stand and give it your best. It may sound like a speech from a 1980s underdog sports film, but it's sound advice. This advice doesn't mean you should stop trying, though. People won't like you if you're unpracticed, so definitely make sure you're doing the best you can. Perfection, however, shouldn't be worried about. Just be honest with yourself, and your audience and success will follow.

The dark side of perfection

If risking your musical career wasn't enough to wean you off the perfectionist track, perhaps you'd be interested in this next bit. Even just striving for perfection can put one's health at risk. Having such lofty goals can create heavy mental pressure. In fact, studies show that the trait of perfection is linked to a decline in health and early death. Making this even worse is the attitude of perfectionist who distances him- or herself from people, denying any support from friends or family.

While most people tend to find support as kind and nurturing, perfectionists see those people as critical of them. They'll hold off on seeking help completely because they don't want to feel imperfect or let others see their weaknesses. Asking for help means they're flawed in the eyes of perfectionists. For this reason, poor health shows up. Additionally, perfectionists often doesn't have time to take care of themselves because, ironically, they're spending the majority of their time trying to be perfect.

Hopefully, you want to have a long and prosperous music career, but that won't happen if you continue to chase the myth of perfection. It might take some getting used to, but ultimately, it'll be a humbling experience that will help improve your performance skills onstage as well as your mental health.