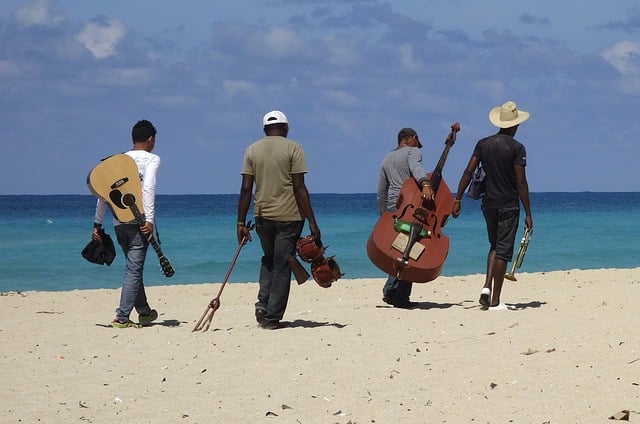 We can only assume these guys are on their way to chuck their instruments into the ocean. (Image via pixabay.com)

Remember the 1999 film Galaxy Quest with Tim Allen? No? Well, to refresh your memory, a motto from the film was, "Never give up, never surrender." While it was more of a joke in the movie, this philosophy has become a popular one to live by in Western culture. But in terms of your music career, this might not always be the best advice.

Commitment and persistence in the face of challenges is important, honorable, and necessary. Many lifelong goals require such dedication in order to achieve them. That being said, sometimes goals are simply unattainable.

During these moments, "Never give up, never surrender" doesn't really apply. There are moments when we need to see that a goal is unattainable. We only have so much time, energy, and resources throughout our lives, and they can be put to better use towards a new goal. Here's how to know when it's okay to give up.

Why all the hate on giving up?

For the most part, society views people who "give up" as failures. After all, we cherish strong will and determination so much that anyone who falls short of that must be weak or depressed. In actuality, it's quite the contrary.

Think of "giving up" in different terms: it's not so much failing, but more so disengaging. By disengaging, you demonstrate control of the situation, and that you were able to see what was working and what wasn't.

Halting your pursuit for one goal doesn't make you inferior: there's even science to prove it. One study took a sample of college students and asked them to explain any unattainable goals they may have.

First, the students were asked if they were likely to stop pursuing these goals. For example, they were told to rate how easy it was to stop thinking about them. They also reported on their chances of pursuing alternate goals and how much effort that would take.

You might be wondering what constitutes as an unachievable goal. Perhaps a goal is unachievable because the opportunity doesn't exist anymore; maybe a certain life challenge is preventing you from making progress. Things happen and they can affect our individual pursuits. This isn't always a bad thing, though.

The upside of giving up

In the aforementioned college study, the results showed that those who had the ability to disengage from their unattainable goals showed signs of lower stress. They also had fewer negative thoughts and felt more in control of their lives.

Those who couldn't break away from the truth and still pursued their unattainable goals experienced the opposite. These people had higher levels of stress, more negative thoughts and less control over their life.

The reasoning behind this lies in the aftermath of "giving up." When the group members realized a goal was unattainable, they did one of two things. They either became sulky and depressed, or re-engaged in something else more productive.

Those in the latter group found themselves in a mental state of well-being. It's not just about disengaging: you must pursue another goal to replace the previous one. Otherwise, you're not being productive at all, and that's arguably worse than wasting energy pursuing an unobtainable goal.

[How to Set Music Career Goals You Won't Give Up On]

Choosing a new goal is especially helpful for those who can't quit their old habits. The stubborn ones are usually very resilient, if a bit in denial. If they can find a way to channel that ambition somewhere else, though, they might find great success. These people will find that re-engaging in a new direction will reduce their overall distress due to lack of accomplishment.

It's going to be hard to shed that "never give up" mentality, but it's all a matter of perspective. Think about all the opportunities out in the world. How can you possibly explore them all if you don't at least try?

Maybe it's been a dream of yours since you were 10 to play Madison Square Garden. Twenty years later, you're still playing open-mic nights and have a kid on the way. Not that there's anything wrong with that, but considering your life situation helps you establish real, achievable goals and develop a plan to reach them.

No one was "born to be a musician." There are a wealth of paths out there, and you can succeed at any number of them. The thing is, though, you have to give it a try. You have to be willing to let go of that unobtainable goal and put your efforts elsewhere. As mentioned earlier, this is never easy but you'll be much better off for it down the road when you're succeeding in some other venture.

How to know when enough is enough?

So how exactly do you know when enough is enough? Well, that's not exactly an easy question with a single answer. It's an art form. For some, this might be obvious, while for others, it might require some digging.

One quick and easy way to judge this is with stress. If you're feeling so stressed about a particular goal that it has a negative effect on your life, then perhaps it's time to drop it. Goals are supposed to be challenging, but you shouldn't need sleeping pills to fall asleep or be in a state of depression just to achieve them.

The only goals that are really worth stressing over are the ones that will help you grow as a person. If becoming a rockstar is turning you into a monster and hurting those around you, it's simply not worth it.

Are you in the music game to make money or prove your superiority to the world? If so, you're in it for the wrong reasons. Leading a happy, productive and fulfilling life should ultimately be your first goal. If your music career, or any career for that matter, interferes with that, then it's time to move on.