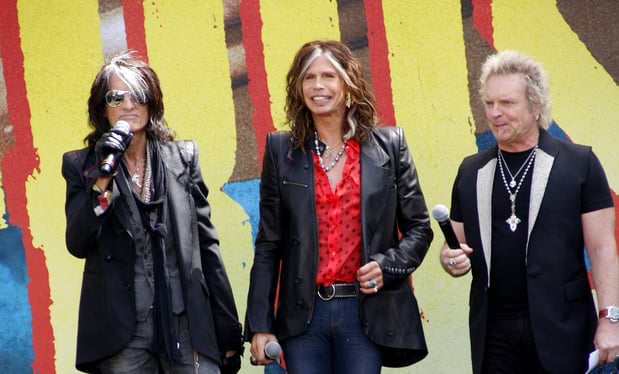 Even superstars like Aerosmith still need to answer these interview staples. (Image by Tinseltown via Shutterstock)

Getting press as an up-and-coming musician can be incredibly difficult, so if you do manage to attract the attention of bloggers, and they want to speak with you, make sure you’re ready to give a great interview. That may sound simple, but many artists aren’t prepared for what’s coming, and they end up coming off as dull or unintelligent when the final copy is printed.

Before you begin promoting anything, make sure you have answers to a few very broad, often-asked questions ready to go. These are favorites for many writers, especially those doing quick Q&As.

Once you have something to say for all of these (or any variation that you may come across), you’ll find that the prep you've done will come in handy when speaking to fans and networking, so it’s definitely worth spending at least a little bit of time on these questions.

You might be surprised (or maybe not) at how many artists I’ve interviewed or met who can’t give a logical, understandable answer to my asking what their music sounds like, which is, quite frankly, ridiculous.

While you may feel that your music has no peers and that it's unlike anything else that exists out there, you’re probably wrong, and you should stop thinking like that. It’s extremely unhelpful when an artist can't, or refuses to, compare their work to anyone else in all of recorded history.

Putting a new, lesser known act alongside one that's more familiar to the public is a great way for people to understand what’s going on before they give you a listen if they haven’t already heard your music.

Whether you compare your style to someone else, or you simply define it by genre, being able to explain what it is you do is very helpful for many people, and it will get you a lot farther than being glib or trying to act as if what you’re doing is beyond definition.

You can say it’s “post-hardcore,” “sort of like Grimes,” or even “a Brooklyn woman’s take on electronica-inspired hip-hop,” if any of those come even close to your music. It doesn’t really matter, as long as you have a good way of explaining yourself for those only ready for a soundbite.

[How to Respond When People Ask What Your Music Sounds Like]

Another topic you’ll surely have to discuss is the inspiration behind, well, pretty much anything you do. If you drop a new single, people will want to know where you came up with the lyrics, or if your new music video is especially interesting, they’ll ask how you created and envisioned the visuals. This can sometimes be easy, but at other times, even you’re not entirely sure how things came to be.

If there’s a simple story behind the inspiration, such as a breakup or a recent party you attended, feel free to stick with that, but do your best to ham it up and make things sound unique and a bit more interesting. If you can’t quite seem to figure out where certain words, feelings, or images came from, you can feel free to explain that, but be ready for plenty of follow-ups.

Interviewers and fans will definitely be curious, and they’ll wonder what you’ve been listening to, watching, and so on. Delving into your own psyche and creative mind can be fun, and it may help you uncover some inspirations you didn’t realize were important.

3. Who are your influences?

Any musician who says he or she isn’t influenced by others, which I've heard too many times, is either lying or completely delusional. Be ready with a handful of artists' names that you can drop whenever someone asks.

You can explain that Brand New is your favorite band, or perhaps that your parents played the Rolling Stones nonstop when you were a kid. Maybe Bon Iver’s lyrics really resonate with you, or you love what Solange is doing with electronica and R&B.

Again, it doesn’t matter what you say, as long as you can point people in the right direction and show them who or what has been influencing you both as a person and a musician throughout your career. This both puts your work into a different, easier-to-understand context, and helps give writers plenty to work with.

You may have just spent two years writing, recording, and editing an album that you feel is the best work you’ve ever done, but once people have heard it, one of the first things they’ll be asking about is what's next. It’s a frustrating question, but it's one you’ll definitely come up against at some point in your career. While many music journalists understand the time, money, and effort that goes into crafting an album, they have to ask what’s coming up next, as it’s something their readers definitely want to know.

Whenever you're asked this question, do two things: have something that’s on the horizon, and answer with poise. You can joke about being annoyed at the question or about how you just exhausted yourself touring or recording a full album as long as it’s lighthearted.

The best way to ruin an interview and destroy a relationship with a writer is to become angry at them. Save that for when (and if) someone asks something really inappropriate.

You may have just released a record, and there might not be any new tunes coming anytime soon, but that doesn’t mean there’s nothing in the near future for your fans to get excited about. It can be a tour, the launch of a single from the album, a new video, or perhaps more of the vlogs you post on YouTube. It’s always good to be able to say something as it makes fans happy to know you aren’t entering a dry spell and that you’re still working hard.

Next up: 8 Things Musicians Should Never, Ever Say During Interviews