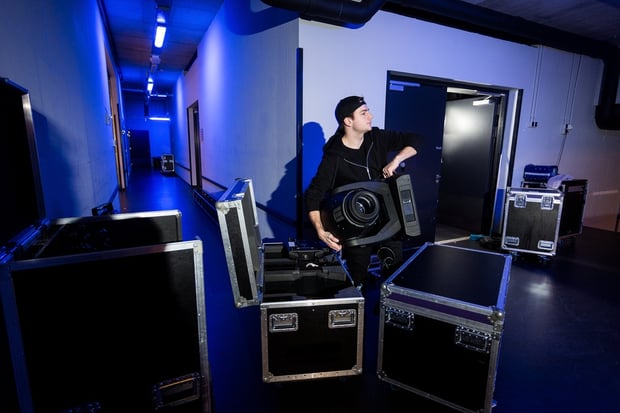 Once you've finally reached the milestone of touring and paying gigs, your band will typically be offered a rider with items provided by each venue. Although the list can include anything (depending on your rock star status, of course), this list is most often a mixture of foods and drinks that the band wishes to have backstage before and after their performance. The tour rider is actually part of the bigger show contract, which includes terms and conditions, tech needs, sound, and setup, as well as a summary of payment. From Van Halen's legendary M&Ms rider to the most recent issue Jack White had with his guacamole recipe leaking, riders have a history of not only causing drama, but making the band appear ridiculous.

The following are some dos and don'ts when it comes to what you should include in your band's rider. Keep in mind that the less outrageous your band's demands are, the more likely the venue will invite you back.

1. Keep the show contract stapled to the rider

The show contract is essentially a series of exchanges. Your band will play at X venue on X date and X time, and in return, X venue will pay you X dollars. Airfare, hotel room, food, and other basics are often included in this as well, depending on how big the tour is and the popularity of your band. This contract is roughly just a page long, and everyone from the venue to the band manager to the booking agency should keep a copy of the signed contract so there are no discrepancies. Remember, everything should be signed before the day of the show. Without a signed agreement, you and your band don't have a leg to stand on.

[Learn more: 4 Important Details That Should Never Be Left Out of Your Performance Contract]

2. Expect to be fed, but don't ask for too much

Touring bands deserve to be fed, but few acknowledge that it costs the venue a lot of money to do this, especially when there are several bands playing in one night. Bands who ask for literally more than they can chew are doing themselves no favors. It's in your best interest to keep the food requests as simple as possible and allow for substitutes. Your favorite salsa may not be available in Bloomington, IN, and you may have to settle on a certain brand of bottled water. Do your best to be gracious, and try not to annoy the concert promoter and venue manager. If you're flexible, you'll be surprised how easily your band gets put on the bill next time you're planning your tour.

This should go without saying. Although you may have heard from other bands that they received a variety of drugs and other illegal things by putting them on their rider, don't attempt to ask for these things. The last thing you want is to get a reputation that could get you banned from the venue, or worse, in legal trouble. What you do on your tour bus and hotel room is your prerogative, but don't get the venue involved.

[Learn more: 4 Ways You Might Be Damaging Your Band's Reputation Without Even Realizing It]

4. Go easy on the alcohol

If everyone in your band is of age, it's okay to put alcohol on your rider. Along with food, the venue expects to supply their performing bands with booze. Like the food, however, allow for substitutes and don't be overly picky. Not all lager is available in all locations. The venue may also provide you with drink tickets, which you can give to your crew and/or a few friends.

When it's time to head out, be sure you don't leave the place a complete mess. Go ahead and take the leftovers with you for the road; the venue will just be throwing them out anyway. The best "thank you" you could give a venue is to leave the backstage area in the way you found it – or cleaner!

Amanda Caswell has spent many years in the music industry, from personal assistant to Carly Simon, to merch girl for four years at the Paradise Rock Club, to wardrobe assistant for Justin Timberlake. Now she makes her living as a freelance copywriter and blogger.