4 Tour Horror Stories That Will Make You Cringe 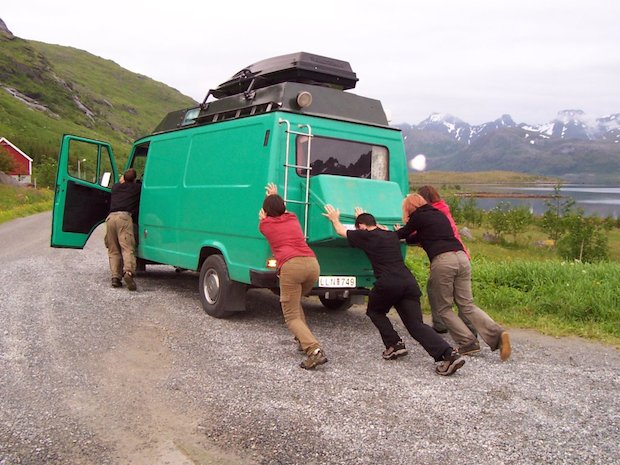 Picture three to six eclectic musicians (who most likely haven't showered in days) crammed into the backseat of a 20-plus year old passenger van on top of their amps, zig-zagging across the country for months at a time. What could possibly go wrong?

Contrary to the glamourous image of major label artists, anybody who has been in a touring band knows the reality of being a traveling musician. No matter how prepared you think you are, conflict is bound to happen at some point on the road. Car problems, money problems, and personality problems are consistent issues faced by touring groups, and that's not to mention all of the freak, one-time occurrences that vary from town to town.

While many of these struggles range from frustrating to maddening at the time, they can often be looked back upon with some degree of fondness or humor. At the very least, one can usually take a good lesson away from tour horror stories like these!

"Dave, Josh, and I were playing in a different band at the time, and we had just bought a van for about $1,000 (great deal!) and booked a bunch of shows up and down the East Coast. Halfway through the trip up to our show in Bangor, ME, a tire blew while we were in the passing lane going about 80 MPH. I thought I saw my life flash before my eyes, but it was really just the cars in other lanes trying to swerve around us as we made our way over to the breakdown lane.  We didn't have AAA, so one of the other guitarists at the time (Matt Kelley) and I hitchhiked to a Midas and explained our situation. The tire was fixed, and we hit the road again.

Then about three miles from the venue, the power steering went. When the power steering goes on a vehicle, all one has is manpower to turn the front tires and keep the whole vehicle aligned properly. We made it to the venue, played our set, and headed back to Massachusetts. Normally, this would be about a four-hour ride, but without power steering on a four-lane highway, it turned into a nine-hour ordeal. I drove the entire way home from 10:00 p.m. until 7:00 a.m. My arms felt like falling off by the time we pulled in. We ended up selling that van for parts shortly after." – Christopher Anthony, drummer of Nemes

"We were in New Orleans on the way to SXSW 2013. It was the perfect party city for guitarist/bassist Jeff Butcher to take the town in style. He broke out his swanky John Fluevog kicks for the first time that tour and rocked out for the whole day and night in them. The next day, something smelled – real, real bad. Turns out a mouse joined us on tour all the way from Jamaica Plain, MA, to New Orleans in Jeff's shoe. The dried up furry friend didn't catch our noses 'til a deadly concoction of foot sweat helped bring out its full aroma. Whatever you do, take care of your shoes!" – Pat McCusker, frontman of Friendly People

Saved by the Scientist

"One story seems to stand above in infamy. Friends, always keep your band fund strapped to yourself somehow.

We were on a tour of the southern US in early 2014. One of our gigs was in a small town, in an odd sort of bar. The band that had set it up was great, attendance was good, and we made a few bucks. After the gig, we went to stay at a converted church building, owned by the band's friend, the scientist/Harley rider/genius. He had been letting some of their band live there as some sort of work trade, and we quickly became friends with them all. It was the coolest. I was surprised when one of the tenants offered to sell me speed – but by your seventh tour what are you surprised by, really?

We spent two wonderful nights, including a band rehearsal in the once-sanctuary. It was on the day of our departure that I found the wad of cash missing from my coat pocket. It was a dry spell in the tour and 200-odd dollars in fives and whatnot gets really bulky in your front pants pocket. I'd transferred the clump of bills to my coat in the living room. Now it was gone, and the only people around had been very nice. The fella who'd offered me speed had been gone all morning, having borrowed the scientist’s car without permission. After a couple of hours, we finally reached him on the phone. With some urging, he recollected that some of his 'friends' had shown up in the middle of the night. His friend was rather infamous for being a shady dude.

The scientist promptly hopped on his Harley, led us to his bank, and withdrew the amount I'd said was taken. He cared very much about our condition as traveling artists, and said not to worry, that he would catch up with the shady dude to settle accounts soon enough. He even gave me an extra $40 because he saw one of the van tires was starting to rot apart." – Michael Trew, frontman of Autumn Electric

"We went down to Tampa, FL, to play a festival for one of our absolute favorite radio stations (WMNF). It was a great day with a ton of great bands, and we loaded up on a cool outdoor stage in a courtyard in downtown Ybor City. The courtyard was packed, and as we started our set, I noticed that the drum riser I was on was very bouncy. As the set went on, cymbals bounced off the drum riser and festival staff members appeared side-stage, presumably strategizing about how to stabilize the riser. At that moment, a support beam snapped very loudly and I felt the riser get even more unstable. The crew quickly got to work and ended up using planks of wood and several car jacks to hold up the riser for the rest of the set. I was fairly certain I was going to die that night, but we all made it out safe and sound. Man, would it have been sweet to go out onstage, though. Just another crazy day, I guess!" – Mateo Vosganian, drummer of Wild Adriatic

What's the craziest thing that's ever happened to you at a gig or on tour? Share your story in the comments below!