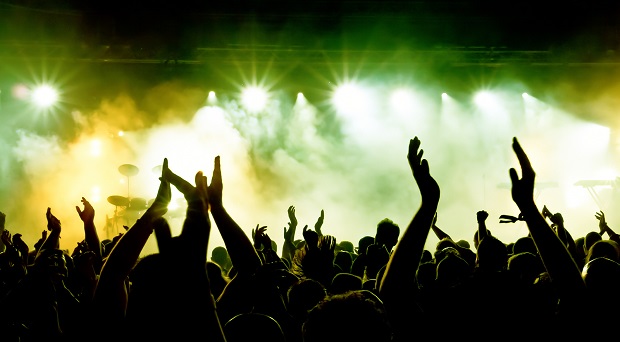 We can all probably recall a time where we went to a concert and came out thinking, "Meh, it was fine, but nothing special" or, "I just expected more." Most of the time, this isn't because the artist did anything wrong like bungle lyrics or sing off-key; it's more often than not about what the artist didn't do. If you're like me, you don't only go to a concert to hear the same songs you've had on repeat the past few days in tidy MP3 format – you go because there's something atmospheric and memorable about concerts (when done right) that Spotify could never replace. When artists fail to capitalize on all the potential interaction and freedom the stage lends, their acts fall flat because they’re giving us what we’ve already experienced, not something unique.

Here are just a few tips on how to make sure your fans aren't left hungry for more when leaving your gigs. Instead of disappointment, they'll be walking away with an unforgettable memory at the end of the night.

1. Interact with the crowd at all possible moments

Making your audience feel important and cared for, as opposed to just objects in the crowd, should be the first thing on your mind. After all, they're the main reason you're onstage in the first place. They care deeply about your art and success, so care deeply in return about their happiness.

Between songs, take the time to give a funny anecdote from touring or say something about the city in which you're playing. If you're a native, play up your love and loyalty. If it's your first time there, talk about something awesome you learned about it. Perhaps most importantly, give your audience the opportunity to respond to you. It can be something as obvious as asking how everyone's doing, or something as mundane as asking where to get the best cheesesteak in Philadelphia. If someone in the crowd is going particularly crazy, single them out and make their night while simultaneously giving everyone else a good laugh.

2. Get creative without becoming gimmicky

I'll never forget the Decemberists concert I went to in 2009. Beyond playing a great set, they implemented a creative technique that created an experience that literally could not be replicated. Instead of only playing from a predetermined setlist, the band had rigged a giant lottery ball machine with balls the size of softballs spinning around inside. On each ball was written a song name or some silly activity like, "Colin does a freestyle rap" that they would perform if that ball was pulled out. The key was that they didn't always rely on the prop, but rather used it sparingly throughout the night, making it a treat for the audience without overpowering the show. For a great finishing touch at the end of the night, they shot out whatever balls remained into the crowd.

Such a theatrical twist might not vibe perfectly with the atmosphere you want to create with your concert. You should first and foremost do what feels natural to you, because anything forced is just going to come out awkward. On the other hand, always be willing to step outside your comfort zone. Another easy technique I've seen is asking for the cellphone of someone in the front row, calling up that person's mother, and singing when she picks up the phone. There is no one-size-fits-all technique, though, and it may range from something you use to something you wear. Brainstorm with others to figure out what would work best for your act.

3. Think about sight, not just sound

It goes without saying, but at a concert, the experience goes beyond what the audience hears, and what they see becomes just as important. A concert is the best opportunity for you as a musician to appeal to all of your fans' senses, and an aesthetically pleasing experience is one thing they can't get from just listening to your tracks online. You don't need to splurge on a laser light show every night; just think about ways that you can "beautify" your concert. This may mean having a great lighting tech who knows how to flatter you onstage, a fog machine that creates the somber and mysterious mood you're going for, or something as DIY as a stage background you or your band have created with your latest album cover on it, or some funky, creative design that goes well with your overall image. Always keep in mind what technology you have available at each venue, and take advantage of all elements, especially considering you'll have a captive audience for anywhere from 30 minutes to a couple hours.

Your gigs are a great opportunity to try something new with your audience. You run the slight risk of something not being received as desired, but there are few rewarding things in life that come without risk. Furthermore, your audience wants to get something out of the experience that they couldn't get otherwise, and this includes the actual musical content of your concert. When the Decemberists covered ELO's "Mr. Blue Sky" at the aforementioned concert, and when I stood in the crowd as the xx played a remixed version of their own hugely popular song "Intro," it added so much more to the experience, because these were moments I would not be able to recreate in my bedroom. Your fans are anticipating hearing the songs they already know, so blow them away with the unexpected.

Hopefully this short list has got you thinking about the ways you can set your concert apart from just a reenactment of your latest album. Putting on an unforgettable show is a gift for everyone involved: your fans keep coming back, and they get an irreplaceable experience in their memory bank. Combine these tips with more on how to make your live show an experience from a marketing perspective, and you'll see how a powerful live performance is one of the best things you can do for your fans.

Turn your next show into your best show: