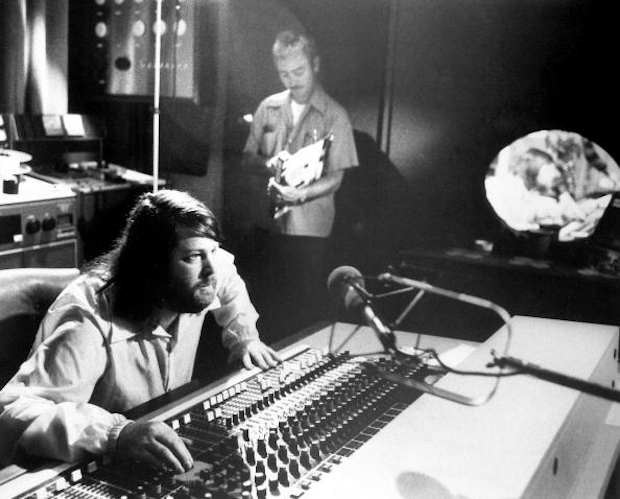 Brian Wilson in the Studio in 1976. (Image via Wikimedia Commons)

Most audio engineers will tell you that there’s a right way and a wrong way to record music, and if you’re going into the studio to make an album, it’s worth taking the time to do things right. Not every great album, however, was recorded using the “right” methods. In fact, some of the greatest albums of all time were recorded in ways that would seem totally wrong to most experienced audiophiles. Here are some of the best examples of albums that used the wrong techniques to get the right sounds.

My Bloody Valentine’s 1991 album Loveless has gone down in history as a defining shoegaze album, but it almost didn’t come out. The band spent two years working on the album, almost bankrupting their record label in the process. Throughout that period, band leader Kevin Shields experimented relentlessly with different recording techniques and locations, moving the band between 19 different studios and changing recording engineers almost as often as he changed studios.

In order to achieve the now-iconic dreamy vocal sounds on the album, Shields would often wake vocalist Bilinda Butcher early in the morning and march her straight to the vocal booth to record a take. In the vocal booth, Shields hung curtains over the window so there could be no communication with the either engineers or the outside world in general.

Often, Butcher didn’t even know what lyrics she would be singing; all she had to go on was a vocal track that Shields recorded earlier that she had to decode without any help from him. Years later, Butcher claimed that she had no idea what she was singing on certain songs, but today the vocal sounds from Loveless are unmistakable.

More than anyone else, Brian Eno has probably been the most successful at blurring the lines between audio engineering and music. His philosophy is not just to use the recording studio as a place to capture music, but to use the studio as an instrument itself.

This method is exemplified on Eno’s recording and production of Talking Heads’ Remain in Light album. While recording the song “Once in a Lifetime,” Eno had each band member overdub his or her part, but to make things more interesting, he didn’t let them hear what the other band members had recorded.

He also would also use other experimental techniques to mix up the band’s sound, such as starting each take on a different count so that each part emphasized a different downbeat, but all parts stayed in time with each other.

As the lead singer of Talk Talk, Mark Hollis was already well-versed with using experimental techniques. The band’s final two albums, Spirit of Eden and Laughing Stock were pieced together from hours upon hours of improvisations and sonic experiments.

For his first and only solo album, released in 1998, Hollis wanted to recreate the feel of a vintage jazz recording. Most of Talk Talk's albums were recorded using a single microphone at the front of the room, with each player placed strategically around the microphone at the optimal position for their instrument.

For his album, Hollis followed this same method, but used a stereo pair instead of a single mono microphone. He and engineer Phil Brown set up the band around the pair of microphones, but instead of tracking them live, they marked everyone’s spot in the room and recorded the instruments one by one. The result is a remarkably cohesive sound that was actually pieced together from a large number of overdubs.

When Michael Jackson recorded Thriller in the early 1980s, there were plenty of effects units available that could be used to manipulate singers’ voices. For audio engineer Bruce Swedien, however, these effects simply didn’t cut it.

Swedien was not one to settle for a sound unless it was perfect. He reportedly made 91 unique mixes of “Billie Jean” before settling on the final version. So when Swedien wanted the echo of the lyric “don’t think twice” from “Billie Jean” to sound like it was coming from far away, he didn’t mess around with filters or reverb units. Instead, he had Jackson sing through a five-foot-long cardboard tube. The sound obviously worked, because that vocal take is the one that ended up in the final mix.

When it comes to doing anything unorthodox in a recording studio, Brian Wilson might just be the king. Many of his ideas involved making concepts more tangible by creating physical representations of them.

While recording the song “Fire” for his ultimately abandoned masterpiece, Smile, Wilson really wanted to give the players the sense of what it’s like to be in an actual fire. He wanted the song to feel chaotic and frenetic, just like a fire burning through a building would be. So to bring the idea to life, Wilson lit an actual fire in a trashcan in the tracking room, and then got everyone in the studio to put on fire helmets to complete the effect.

Sure, the fire department wouldn’t have been pleased with Wilson’s antics, but you have to admit, the man had a real dedication to his ideas.

All of this isn’t to say that learning to record things properly is a bad idea.Doing things wrong can lead to great sounds, but only if you have a good reason for straying from the textbook method. It’s just like they say: you need to learn the rules before you can break them. Once you do start breaking the rules, however, you might be surprised at how good it feels to get things wrong.

Next up: 6 Things You'll Learn Recording Your Album That No One Will Tell You