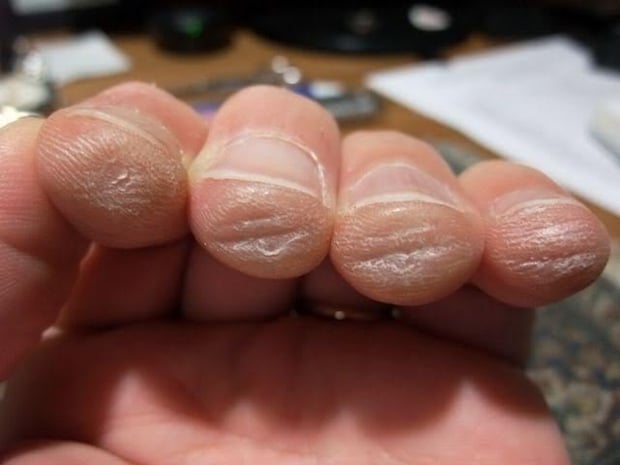 Guitar chops can get rusty sometimes. It's a fact of life. There are a variety of reasons that your fingers may slow down or your technique may get sloppy. However, your fans and your critics won't be taking any excuses. If you notice that your four best friends have gotten a little lazy lately, then it may be time to dig into these drills. They're easy enough to do while watching TV, but can restore your skills in no time.

This drill is the simplest and most effective warm-up routine that I know of. It'll not only increase the speed and endurance of your fingers, but it'll give them separation. Be sure to use alternate picking to make your right hand faster, too. I take this drill up to the twelfth fret and then come back down. For an added challenge, ascend strings while descending frets and descend strings while ascending frets.

Make this drill the backbone of your practice routine. You'll gain the impeccable technique that separates good guitarists from the true wizards.

Fingers sore yet? Not quite? Give the three-fingers drill a try. It's the same deal as the four-fingers drill, but just use three fingers this time. Be sure to practice both variants of the drill, using the 1-2-4 pattern and the 1-3-4 pattern. A few repetitions may leave your fretting hand screaming. The pain will subside, so try to press through it. Think of it as WD-40 hitting the rust on your hands.

To the twelfth and back again.

Get through that one without any pain? Think you're tough now? Well, if the last drill didn't have your fingers wailing, I can guarantee this one will.

The pull-off and hammer-on drill uses the same fingerings as the previous drills. Go from the first fret up to the twelfth and back, and use both 1-2-4 and 1-3-4. Play each note as clearly as possible. It may take some practice to get any sort of speed on this one. Mix up ascending and descending the same way as the last two drills.

You get the idea.

By the time you get the hammer-on pull-off drill down, your fingers will be getting back into shape. It's time to switch to a more practical exercise. Try to run these three arpeggios up the neck. If you practiced the other drills enough, they should be a cinch! Make sure to use alternate picking as well as sweep picking.

Think you've whipped yourself back into shape again? Are your ready for the ultimate test? Give the harmonized D major scale a shot with your arpeggios. You'll get a better feel for the fretboard while you give your fingers a workout. Metal soloists frequently use this type of harmonization, but it's also prevalent among bluegrass, jazz, and rock players.

If you can get this drill into your fingers, then it'll start coming out in your playing. Your ear will know the sound it wants, and your fingers won't need to hunt for it anymore. Get this drill down, and you'll officially be in the right shape to blow minds and melt faces.

Practice these five drills to shake the rust off of your hands and add something new to your repertoire. Your bandmates and your fans will notice your rapid improvement. Make these exercises into habits. Run through them every time you pick up an axe, and no other guitarists will dare to challenge your prowess. Soon enough, your chord changes will be tighter than ever, and your solos will make fans weep in ecstasy.

This article was updated on November 4, 2015. It previously featured an image with an error. Thanks to our readers for catching that!