5 Effective Ways for Cash-Strapped Musicians to Promote Their Gigs 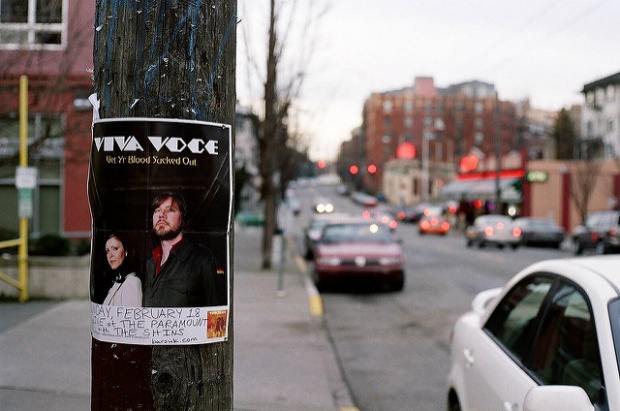 Photo by Chelsea Nesvig via flickr.com; used under Creative Commons

After spending months rehearsing and getting your songs tighter than a sweat-soaked shirt on a metal band’s drummer, you’ve finally landed a decent gig. You’re opening for some touring band that’s coming through town and you couldn’t be more excited. The only problem is that the show's on a Tuesday night, and you just know that in your hometown, it’s going to be hard to convince anyone to come out and watch you rock your pants off on a work night. To add to that, you just bought that new amp, so you can’t exactly rush out and drop a bunch of money on promotion for the gig. The out-of-town band doesn’t have time to promote every individual show. Hell, that’s why they asked you to open in the first place.

So how does a cash-strapped musician – and let’s face it, that’s most of us – get the word out about these gigs? Simply creating a Facebook event and sharing it with all your friends is not enough promotion for any show. I don’t care if it’s happening at the nearby amphitheater or the summer barbeque for your local block party. You need to do more to get the word out about your gigs. So let’s look at a few of the better options.

Sticking up posters for gigs is one of the oldest tried-and-true methods of show promotion in existence. A.P. Carter (from the Carter Family, duh) used to drive around to the towns he and his family were scheduled to perform in days before the gig. He’d put up flyers advertising the concert, usually held in a church or local hall, and try and drum up some anticipation. And that was in the 1920s.

Posters in general date back to the 1840s when the printing industry perfected color printing, making mass production possible. They’re a relatively cheap and eye-catching way to advertise an event, but they’ve been synonymous with music for decades. Any joker with MS Paint can come up with some half-assed design, but where you’ll find the most success is by convincing your artistic friend to put together something for you on the cheap and go run off 500 copies. The better looking the thing is, the more likely people will pause to look, and that’s really the trick here. People are too busy staring at their iPhones and bumping into strangers to look up at your poster for more than a second. So make it interesting enough for them to pause and give it a longer glance.

As far as putting up the flyers, you can go the old packing-tape-around-a-telephone-pole route. That’s probably the easiest way to get your poster out on the street. A more effective way is by wheatpasting the paper to the pole or wall. This is less likely to be torn down, but more likely to draw the ire of the local constabulary, depending on where you live. A lot of record stores, instrument stores, coffee shops, and restaurants will have some place to feature advertising for local shows, so go sweet talk the dude behind the counter and see if he can put your flyer in the window.

[Why Concert Posters Are Still Relevant in the Digital Age]

These are just smaller versions of the poster. You should be able to fit a stack of them into your back pocket to carry with you everywhere you go in the weeks leading up to the show. Go crash a college kegger and hand them out to all the kids who are dying to spend their student loans on band merch. Hand them out to strangers on the street. Drop them from the roof of a building. Well, that last tactic is also likely to get you in trouble, since the cops will know when and where to find you, but the point is to just get them into the hands of as many people as possible.

A really good move is to go to other concerts with bands who sound like yours. Wait outside just before the show ends and hand them to all the people exiting. Even if they shove it in their pocket without looking at it, it can still help. Days later when they’re doing their laundry and emptying their pockets, they may see the handbill and decide to come to the show.

This is probably the easiest and most cost-effective way of getting the word out about your gig. Grab some acoustic instruments and take to the streets. Between every ripping rendition you do of one of your songs, belt out to the passersby that anyone interested can come see you play this coming Tuesday at the Pig’s Ear Tavern or wherever. A piece of cardboard and a Sharpie makes for some fine advertising if your music is good enough to make people stop and watch for a minute. It’s also a good idea to have those trusty handbills on… er, well, hand, to pass out while busking.

Depending on where you live, this isn’t always easy, but a lot of college radio stations are desperate for content. It really can’t hurt to fire off an email with a link to your recording, or a recording from one of the other bands, and tell them about the show. Even better, just show up at their door with a CD and flyer and tell them in person. A firm handshake and a friendly smile always goes a long way with people, and building a relationship with any sort of local media is a good step.

Alright so, as discussed, there's a prevalence of social media event pages and invites that many people think is the epitome of concert promotion. Many bands and promoters think that creating a Facebook event and sharing it with all their friends is all it takes to get the word out about a show but, as we discussed, that’s half-assed. Still, you cannot deny that social media is a huge force in the modern world. Making a Facebook event page is the bare minimum for any show, but it’s still something that must be done. If you can convince all the bands from the show to throw in a bit of their cut of the door and pay for Facebook to boost the promotion, even better.

But please don’t stop at Facebook. Take to Twitter, Instagram, or, hell, even Tinder. Whatever form of online interaction you prefer should be used to get the word out. Make a hashtag and be consistent with it. Get everyone in all the bands to use it. Take funny pictures of your drummer and throw them on Instagram. Always swipe right, and tell them to come to your show. I swear that’s not creepy.

All of these methods are helpful in their own way, but combining them or utilizing each one is bound to increase your chances of getting a couple extra people through the door. However, this is by no means a definitive list. Get creative! Try to come up with new ways to get people’s attention. The zanier, the better. All of these are designed to trick people into taking an extra second to look at what you’re offering, and then you’ve got to convince them to come to the show. It’s an exhausting thing sometimes, but try to have fun with it!