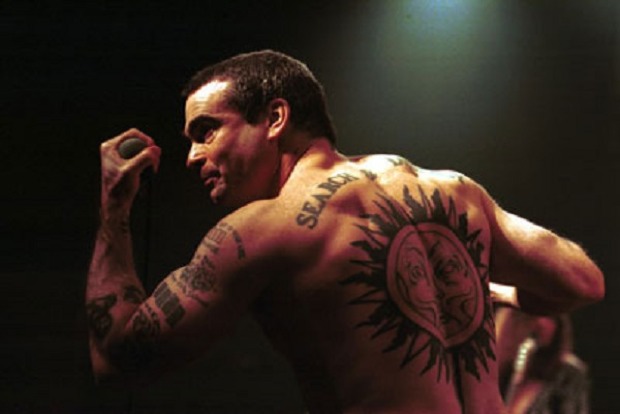 Henry Rollins stays in beast mode while on the road, and so can you. (Image via pelfind.co)

Touring is an important aspect of any musician's career, but as you're traveling from state to state, crashing on couches, or quite possibly living out of your van, how can you possibly stay fit and healthy? Waking up in a backseat after having had a few too many drinks the night before isn't exactly a recipe for feeling great or doing your best onstage.

With that in mind, I gathered some experts on health and fitness to get their best advice on how musicians can hit the road while still keeping their bodies intact. The experts are:

Here are their top five ways to stay fit and healthy while on tour.

If you're waking up on a friend's couch or in the backseat of your van, chances are your body was contorted in a way that's left you with some aches and pains, but there's no need to let those aches and pains take over your day. Skelton explains that with the aid of two lacrosse balls and a three-inch-diameter PVC pipe, you can feel like new after the following simple movements.

"Lay on the ground with two lacrosse balls placed in the small of the back on the muscles adjacent to the spine (not on the spine). Keeping one leg flat on the ground, bring the other knee toward the chest and hold for 10 seconds. Switch legs and repeat for three minutes."

The reason these simple motions work, Skelton explains, is that the lacrosse balls and PVC pipe are being used as myofascial release instruments. "Myofascial release is soft tissue work that has similarities to a deep tissue massage. It facilities the full range of motion of muscle by helping to free up adhesions."

2. Van food doesn't have to be bad food

Food isn't going to keep very well if you just throw it in the backseat of your van, but if you make a small investment in a cooler, you can eat healthier and save a lot of money in the long run."You can always refill it with bags of ice at any gas station," Hagendorf notes. "Convenience stores have really expanded their real food options now, including items like hard boiled eggs, vegetables, hummus, and bottled protein shakes." She adds sliced turkey is another great option for the cooler.

Thinking outside of the cooler, Hagendorf advises bands carry trail mix, and nuts in general. "They are packed with nutrients, fiber, protein, and healthy monounsaturated fats, which will make you feel satiated, help regulate blood sugar levels, and help prevent cravings." Jerky is another one of Hagendorf’s van foods of choice: "Jerky is high in protein and can be carried anywhere. Plus, you can always find this in gas stations." She advises, however, to steer clear of the brands packed with high-sodium ingredients, such as MSG and sodium nitrate.

Shamai adds that for bands that may be feeling a bit adventurous in the kitchen before leaving for tour, Japanese rice balls are an option. "(It) takes a bit of prep time," she explains, "but will last a long time. Take cooked brown rice, roll it up into balls and wrap with wax paper. It keeps for a while!"

3. Know the right options when dining out

You're not going to eat every meal in the van. At some point, you're going to grab a bite at a place with an actual table. That said, there are ways to do this right and without killing your wallet. Elliott notes the biggest misconception is that fast food will keep you in the black. "People think eating fast food is saving money, (but) these days value meals come close to $10, not to mention you're literally eating garbage."

According to Hagendorf, a diner is usually going to be your best option, but it's no secret that America is filled with inexpensive chain restaurants, and she says there are ways to successfully eat well at a national chain.

4. Get your workout in without a gym

You're rested, you're stretched out, you're well fed, and now you want to get a workout in, but you can't afford to pay a drop-in fee at a gym in every city you visit.

Don't worry. Quintans explains that when you're on the road, your best gym is your own body. "Body weight exercises are typically overlooked as elements for a good workout, but air squats, lunges, push-ups, sit-ups, burpees, pull-ups, running, and jumping are incredible movements when done in high repetition."

He adds you also might have gym equipment right in front of you and not even realize it. If there's a park nearby, you have a place where you can do pull-ups. Quintans and Skelton also note that a band's own van can be used as gym equipment. "Find an empty parking lot, pop the van in neutral, and spend 30 minutes pushing it back and forth. Spend five minutes warming up with a jump rope, then proceed to perform 20- to 30-second pushes with a 90-second break in between to bring the heart rate back down, [and a] five-minute cool-down walk at the end.”

If pushing your van sounds a bit extreme, Skelton and Quintans routinely put together workouts that allow people to get out of the gym, two of which are as follows:

As an added bonus, if you're working out in a public park, you may draw some attention to yourselves, which, with a few simple conversations, could easily lead to more people at your show that night.

Some venues will pay you in drink tickets. Some nights, half a dozen fans will buy you drinks and just hand them to you. You don't want to be rude and turn them down, but you also don't want to wake up with a nasty hangover every morning of tour, so as the alcohol is flowing, remember that water is your best friend.

The kind of liquor you choose to drink will also have a direct effect on how you feel. "Clear liquor is best," Elliot explains. "Anything mixed, and/or with high sugar content is a no-no. Adding lots of sugars to your alcohol content raises your blood sugar level and creates free radicals in the body, spiking the insulin levels. If you're performing outside during the day, this means dehydration and maybe passing out."

Shamai notes that in addition to hydrating with water while drinking alcohol, "gulp a big one before hitting the sack," and when you wake up, "more water with lemon should help kickstart [your day]."

In conclusion, if you can purchase two lacrosse balls, a three-inch-diameter PVC pipe, a jump rope, a cooler, and remember to drink your water, you can have a kickass tour, and feel completely kickass while doing it.

Check out even more tips for staying healthy on the road!