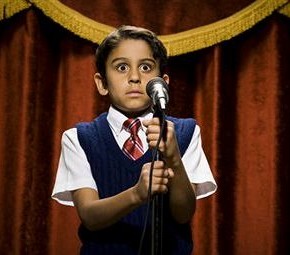 Stage fright is something that almost anybody who has stood in front of a group of people has had to deal with. There is no method that will make it go away immediately, but with a good mindset, your stage fright will disappear gradually as you perform. Here are some things that helped me a lot, as someone who has dealt with some level of stage fright my entire life.

Let’s be honest, this one is a given. But it’s true – the best way to get comfortable doing anything that is out of your comfort zone is to do it all the time until you are comfortable with it.

It’s possible to create opportunities for yourself to perform every single day! In the metropolitan area where I live, there is an open mic night happening somewhere every single day of the week. If you have the good fortune of living in a city that has a lot of music going on, try to pick a few of these nights and go on a weekly basis. Not only will you get tons of great performance experience, but you’ll also meet a good number of serious local players who could get you other gigs down the road. Not to mention that you will get to know the venue staff pretty well, which has many of its own benefits.

If you live in a more rural area or a city that is not so musical, it’s still possible to get consistent performance experience, as long as you can get a little creative. Grab a few buddies and some snacks and hit the streets or parks and play for whoever will listen. If the place you live isn’t so hip to busking, there are almost always permits that can be acquired through the city government that will allow you to play. Pick a couple of friends who you are really comfortable with and who are supportive of what you do (they don’t have to be musicians) and play your set for them every time you hang out. Even take an acting class! Performing is performing, and if you can do it every chance you get, your stage fright will dissipate faster than you can believe.

2. Practice until it's muscle memory.

This is another fairly obvious one, but also worthy of a mention. Muscle memory is far stronger than many people realize. Practice your material until it becomes habitual, and you no longer have to think about executing it. Then, when you get on stage, you can rest assured that no matter how nervous and shaky you are, your muscle memory will take over and the set will practically play itself. Every time you put on a great performance, it will only serve to reinforce your confidence. Go through this motion enough times, and eventually, performing itself will become a habit, and your stage fright will be out of the picture.

3. Watch what you eat/drink.

This is performance advice for everybody, not just those who get nervous on stage. On the day of your performance, be sure to eat well and drink lots and lots of water. Being extremely bloated or super hungry or dehydrated is going to make it harder to play, and definitely won’t help with your nervousness. Same goes for substances or lots of alcohol. It might make you feel better, but it’s not going to make you play better. It’s going to be better in the long run to face the stage fright head-on rather than masking it.

Playing solo is the most vulnerable, and probably the scariest position you can put yourself in. The more people that are on stage with you, the less pressure you will have on yourself. Don’t even pay attention to the crowd, initially. Keep your eyes on those you are playing with and focus on the fact you are making killer music with your friends. It’s important to remember that it’s not all about you; it’s about the song, and those you are sharing it with. Keeping that in mind actually helps take the pressure off of me and makes me feel better on stage, and I recommend it to anybody who is having stage fright.

I know that not everybody is into this, but it really does help. It doesn’t need to be anything ritualistic or procedural. Even just finding a somewhat quiet place backstage where you can be alone, close your eyes, and breathe for five minutes, will help to calm your nerves and clear your mind. It’s also vital to keep breathing once you get on stage! It’s amazing the difference it will make in your nerves and your playing.

What strategies do you use to deal with stage fright? Let us know on Facebook or Twitter.