5 Things All Guitarists Switching to Bass Need to Know 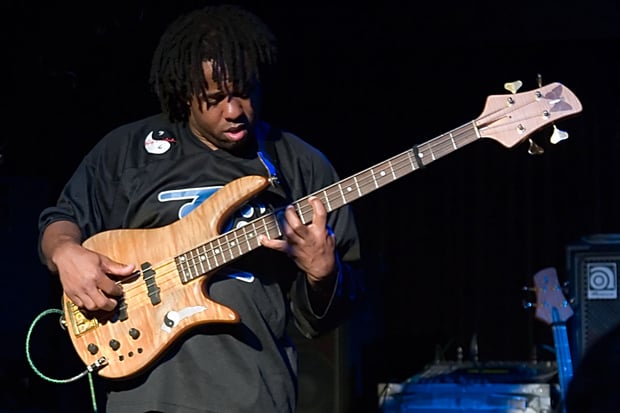 Photo by Jason Mouratides via Wikimedia Commons / CC BY 2.0

In the early days of rock 'n' roll, the spotlight seemed firmly fixed on the guitarists and singers. There was little love or recognition for the rhythm section. Of course, things have changed a lot since Buddy Holly and the Crickets started rocking high school gyms. Metal and progressive rock came along, demanding a higher technical standard from players on all instruments and turning drummers and bassists into heroes. But true musicians know that great bass players were there since the beginning, keeping drummers on tempo, supporting the melodies of singers, and taming noisy guitarists. The bassist plays a noble role in any band. Think you’ve got the mindset to trade your six-string for the low end? Here are five things you need to know.

The bass can take a lot out of the hands and arms, especially when you’re used to skinny guitar strings. Whether you’re using a pick or plucking strings with your fingers, find ways to use a light, fluid technique with your right hand (assuming you’re a righty player). Plucking each note softly instead of murdering it will save your strength and get you through the entire set without having to stop and shake your arms out too often or risk a repetitive stress injury.

Playing too hard all the time is one of the first mistakes guitarists make when they switch instruments. Technology is on your side in this battle; many bass amplifiers come with onboard compression to boost those lightly played notes and prevent your speakers from being shredded when you hit it a little harder.

2. Know when to go back to your roots

A simple song can be riveting when it’s played solo. A songwriter/guitarist strumming three chords and singing poignant lyrics? Great. But when that song comes into a band context, it can get pretty dull unless the other players add distinctive and original parts. The bassist is the guitarist’s closest compositional partner. When the guitar part is simple, it’s time for the bassist to chime in with something driving and melodic to add depth and interest to the piece.

But what if the guitar’s playing a groovy single-note line? The bass can double the part to add power and focus. There are no rules when it comes to writing, but there can be helpful guidelines. Adding whatever the composition needs is one of them. Similarly, there are times to bang out the roots of each chord, and times to add a distinctive counterpoint.

You’ll be pulled in a lot of different directions as a bassist: supporting the guitar and vocals, locking in with the drummer, and adding your own flavor to the composition. But the song is always king. When things work, you’ll know it.

Because of the low pitch register of the bass, you’ll have room to improvise more or less continuously throughout many pieces. This doesn’t mean standing on top of a platform and dominating the room like a Les Claypool or Billy Sheehan (although there are times for that as well). Think of the walking bassline in jazz: it’s not written out – it’s made up on the spot because the bassist knows the chord progression and the notes of the scale that fit each chord.

This is a different way of thinking for guitar players, who often just know the part they’re playing and a pentatonic blues scale in the right key so they can take a solo after the second chorus. Good bass players know enough music theory to improvise by ear within the chords of the song. This contributes to the energy and depth of your band’s performance and doesn’t distract from higher register instruments like horns, guitars or voice. "Soloing all the time, but not soloing," as one veteran session bassist explains it.

4. Pay attention to that bass drum (and your drummer in general)

Nothing kicks like a bass matching up with a drum set, and that frequently manifests when the bassist accompanies each beat of the kick drum with a low, punchy note on the low-E string. At other times, you might play the off beats in between bass drum hits, but it always pays to know where those hits are and use them. You’ll also have the opportunity to fill along with the drummer, matching up composed fills at strategic points in the song. Tight unison fills and bass-drum matching are among those intangibles that make a band sound incredible.

5. Don't crowd the space after a sung verse

Sooner or later, your singer needs to take a breath, and if you’re not careful, you’ll have several players all trying to fill that space at once. Unless you’re playing "out" jazz, you probably can’t all solo over the same measure. This problem can be fixed compositionally, by drawing out verses so there’s more space between each sung passage. It can also be fixed by having every musician listen to one another and trade short phrases.

A melodic run on the bass, a couple of choice licks on lead guitar, a flourish on the keys, and a quick drum fill to lead into the next verse can all happen within a few seconds. When musicians stay in their lanes and support one another, the music sounds like a conversation, and your audience is who you’re speaking to. As a bass player, you’re in the perfect spot to ensure that conversation happens.

If you're thinking of adding the bass to your repertoire, try these tips to progress faster!