5 Things I Wish I Knew Before Going to Music School 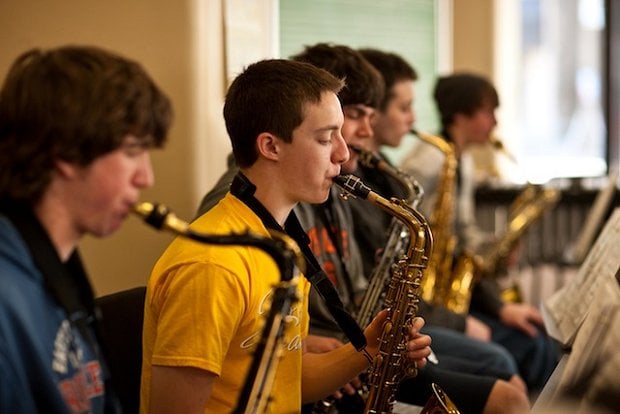 Though a college degree doesn't necessarily make somebody a great musician, there's a lot you can gain from music school. I know that I wouldn't be nearly the musician I am today had I not attended music school, and the experience was certainly worth the cost. There are, however, a few things that I learned along the way that I would have loved to know before stepping into my first day of class. For anybody who's considering music school or is about to start, here's some advice coming from my personal experience.

Music is one of the most competitive fields you could enter, and almost everybody that makes it as far as music college knows it. This can lead to many conservatories having an extremely cutthroat environment, and one that encourages competition to be the best.

Competition can be healthy for growth, and some people thrive particularly well in competitive environments. I was convinced that fierce competition was the way music school was supposed to be, until I got involved at a school that reveled in collaboration, rather than competition. As soon as I began focusing on learning from my peers rather than competing with them, the speed of my improvement actually skyrocketed.

If possible, I recommend finding a school where the emphasis is on collaboration rather than competition. Even if you're enrolled in a highly competitive conservatory program, going into it with an open-minded, collaborative mindset could make a world of difference for you.

When it comes to music school, what you get out of the experience is directly correlated to the effort you put into it. And if you're putting your all into it, you're most likely not going to have any kind of free time.

When I was in college, I would start my day by warming up, then leave for class. I took as many classes as I was allowed to and participated in various extracurricular activities that would typically put me home around 5:00 p.m. at the earliest. I would then practice for a few hours, eat dinner, do homework, and go to sleep. All of my non-school-related rehearsals and gigs filled my weekends. I had the time of my life and learned an incredible amount, but I definitely didn't get many "lazy days."

If you want to go to music school and get the most out of it that you possibly can, come to terms with the fact that you aren't going to have a ton of free time. This isn't a bad thing, nor should it scare you away; you just need to be prepared. Don't bother bringing your TV or your Xbox to school with you – you probably won't use either of them often.

I was fortunate enough to have the opportunity to attend community college during my last two years of high school. During this period, I was able to get almost all of my general education requirements out of the way prior to starting music school. I had no idea how big of an impact that it would have on my experience until I got to music school and watched my friends struggle to balance music with more traditional coursework.

Take your time, and get your English, math, and social science requirements finished at a community college before you head off to a four-year program. Not only will you save a lot of money by doing this, but you'll also be able to put all of your focus into your craft, rather than having to be distracted from practicing by an upcoming essay assignment. This will allow you to truly get the most out of music school.

4. Have a clear goal

If you want to go to music school, have a clear goal of what you're there to accomplish.

There's a large amount of pressure to head straight to college when you graduate high school, but many people these days are taking a year or two to learn more about themselves before making the plunge. Just as I recommended taking some time to sort out your liberal arts requirements first, I also recommend taking some time to figure out what you want to accomplish at music school and what you want to leave with.

When it comes to big music schools with a plethora of program options, many people enroll straight out of high school because they love music and want to make a career out of it. I saw many of these folks flop around majors trying to find what they wanted to focus on specifically, only to leave music school with an unfocused skill set that wasn't able to carry them into the professional world. It's one thing to want to do music professionally, but if you want to go to music school, have a clear goal of what you're there to accomplish.

Many of the people I met in college who went on to find success had extremely specific goals. Many were older, and some even had degrees in other fields. But they knew exactly what they wanted from their programs and had a very clear goal as to what they wanted to do with their degree once they graduated. If this means that you need to take some extra time to figure out what you want out of a music program, then I would absolutely recommend it (especially considering the skyrocketing price of a college education).

5. Make a few strong connections rather than a lot of shallow acquaintances

As every aspiring musician has been told numerous times, networking is everything. Music school is one of the absolute best places to network and make connections, and it can be really inspiring to be around a huge group of people who have similar goals and dreams. Since everybody's trying to make as many connections as possible, however, it can be tempting to try and be friends with everybody you meet. What you typically end up with by doing this is a lot of fairly shallow acquaintances, weak connections that probably aren't going to be a huge benefit to either party.

That's not to say that you shouldn't put yourself out there and be kind to everyone you meet (you never know when you'll be sitting next to a future bandmate or music business mogul in class!), but you don't need to exhaust yourself trying to keep up relationships that you know aren't genuine. So instead of trying to connect with everybody you pass in the hallway, I've found it more beneficial to focus on forming fewer, stronger connections. I played with some great people at music school, but they never became good friends of mine. Nowadays, we aren't really in touch and may never play together again. I also made some very close friends that I would call up in a heartbeat to come gig or record with/for me if the opportunity presented itself, and I hope that they would do the same for me. These are the people that stick around in your life for a long time and are able to make a difference both for you as a person and for your career.