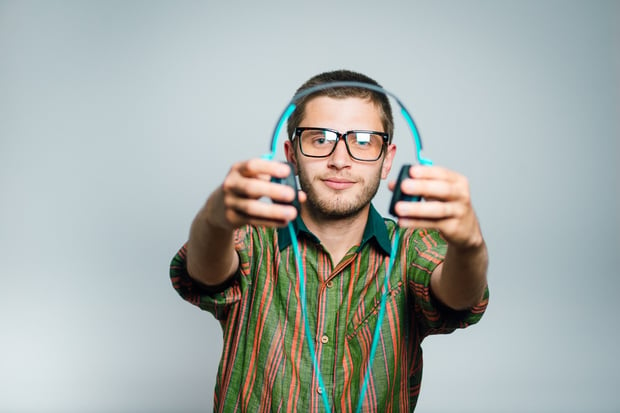 Besides your music, of course. (Image via Shutterstock)

People love to get free stuff, but it’s not always easy to give. Money is usually tight when you’re a musician, and you need to be careful about what you give away versus what you save.

Having said that, gifting your fans something for free is a great way to show them how much you care and that it’s not all about the money with you. These free things can be small, cheap, or they can even come at no cost to you, but that doesn’t mean they don’t have worth to those receiving them.

Here are a few ideas to consider when it comes to giving away things for free at your next show.

People love coming away from shows with music, but not everyone is going to buy your CD, especially if they already own it. You probably don’t want to give away physical copies of music, as it can get expensive to have all those CDs or LPs made just to hand them out. So, what’s an artist to do?

There are a number of services that create cards that fans can be given (or buy, but we're focusing on free here) that feature codes and websites where music awaits and is ready to be downloaded.

These cards are a great way to get people excited about something new that you’ve released, which some fans might not have heard yet. You don’t need to hand out full albums, but maybe you record a special song and only let those fans that turn up to your show and come and claim a download card to own it. Streaming has mostly overtaken download sales anyway, so this won’t hurt you monetarily very much, and it will make your real fans feel valued and special.

Merchandise is where many artists make their money these days, so I can understand where many of them are unwilling to even consider giving it away for free, but if you do it right, losing a few bucks here and there can pay off quite a bit later on.

I'm not suggesting you start making sure that everyone who turns up to a show walks away with a free T-shirt or album, but there are many options for creating something small that can be passed out freely. Consider having special pins or stickers made and doing your best to ensure everyone has one to wear or post as they like. These items typically only sell for a dollar or so, and if you’re still a smaller act, you’ll only need to have a few hundred made for any given tour. That’s not a large investment, and once they’ve all been taken, you’ll have hundreds of people walking around with your band’s name and logo on their clothes, on the back of their cars, or anywhere else.

It’s very cheap advertising, and it will truly make many people feel good and remember both you and the show.

Back in the day, people used to want autographs from their favorite bands and singers, but now it’s all about the photo. With social media’s growth, it's become clear that everyone wants a picture with the band, so get ready to start smiling and posing.

Taking pictures with long lines of people after performing can be tiring, but it’s become a necessity, and if you say no, people will leave disappointed. Tell your fans during the show how you’d love to meet them and take photos after the show is done, which will keep them through your set and make many of them visit your merch booth afterwards, even if some of them had no intention to do so.

You should love your fans as much as they love you, and one of the best ways to show this is completely free. Taking a picture is great, and everyone likes free merch, but there's nothing like a hug to create a real, meaningful connection with another person.

This is something you should be doing anyway, and I’m sure that many of you are, but if not, keep it in mind. A hug isn’t something that everyone will want, and it might sound silly, but people will remember it, and they’ll feel much closer to you afterward.

This one isn’t always possible, but you might be able to work something out with the venue where you’re performing. Speak with the staff before you arrive and see if you can set something up involving either free drinks or drink specials. Booze is where most of these bars, clubs, and concert spots make the bulk of their money, so some will shut down that conversation immediately, but others may be willing to work with you. If you can promote your show a little more heavily, and mention a half-price drink while doing it, some bar owners could probably be convinced.

In terms of free drinks, think about offering it to some fans who went especially out of their way to help you. Did they drive a long way? Did they buy a ton of merch? Maybe they brought a group of friends, which creates all new fans. Alcohol can be expensive, but buying someone a drink is something they’ll remember… unless they’ve already had too many.