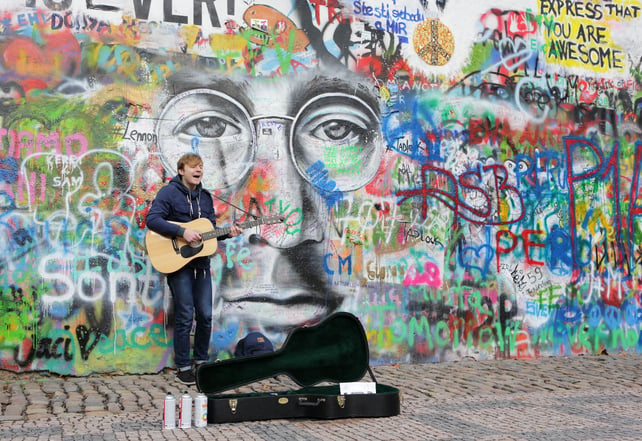 Regardless of how you feel about America's current government, it’s clear that the political situation in the US is becoming increasingly heated. Whenever you turn on the news, there seems to be some new controversial political development. It certainly feels like we’re living through a major historical moment right now.

Through the power of social media, musicians are making their voices heard on political issues. It's certainly not the first time artists have chimed in on the political climate. Throughout history, you’ll find examples of music and musicians playing a big role in a number of major world events.

From the French Revolution to the Arab Spring, here are some examples of times when music has changed the course of history.

Towards the end of the 1980s, while their country was still under the control of the Soviet Union, Estonians voiced their desire for independence in the best way they knew how: by singing.

Under Soviet rule, Estonian national songs and hymns were forbidden, but as dissatisfaction with foreign rule mounted, people began to sing these songs publicly as an act of defiance. These protests culminated at the “Song of Estonia” festival in 1988, where 300,000 people – over a quarter of the country’s entire population – gathered to sing national songs and hear speeches by independence leaders.

The bonds created by communal singing were strong: two years later, when Soviet tanks rolled into the country to destroy radio and television towers, Estonian citizens formed human shields to drive the tanks away.

On August 20, 1991, thanks in part to this “singing revolution,” Estonia gained its independence without any military action.

During the French Revolution of 1789 to 1799, protest songs could be heard not only in the streets, but also in the opera houses, theatres, and ballrooms of Paris.

Meanwhile, people took to the streets singing popular revolutionary songs like “Ca Ira” and “La Marseillaise.” In total, almost 3,000 of these songs were written during the French Revolution. “La Marseillaise” was the most popular of these songs; it became the unofficial anthem of the revolution, and after the abolition of the monarchy, it became the official anthem of the new French republic.

When Slobodan Milošević led Serbia into a series of brutal ethnic wars in the 1990s, his regime controlled virtually every form of media in the country. One small radio station, however, continued to broadcast independently.

As Serbia headed towards totalitarianism, Radio B92 became one of the only sources in the country for non-government-controlled news. The station’s programmers organized protests against Milošević, reported on human rights violations by the regime, and played a steady stream of anti-authoritarian rock and hip-hop songs by artists like Sonic Youth and NWA.

For those left behind in Serbia during the NATO bombings, B92 became the soundtrack to hope and resistance. Although the station was shut down by the government in May 2000, they continued to broadcast online until Milošević was defeated in an election five months later.

In the 1950s and '60s, Native people from rural Chile moved to cities in large numbers, bringing with them their traditional songs and instruments. As these traditional musical styles blended with the modern sounds of the city, a new style of music, called “Nueva Canción” (the New Song Movement), was born.

While this musical style shared some similarities with traditional Chilean folk music, Nueva Canción songwriters used their lyrics to denounce the oppressive political regime of the day and urge people to rise up against the government.

This was the music that ushered Salvador Allende, Chile’s first democratically elected socialist leader, into the presidency in 1970 as he greeted crowds in Santiago under a banner which read, “You can’t have a revolution without songs.”

Despite this opposition, Neuva Canción has continued to flourish through the work of artists across South America who use their music to speak out against injustices of all kinds.

From 2010 to 2012, protests sprung up throughout the Arab world in countries like Tunisia, Syria, Egypt, and Lebanon. In Egypt, millions of people gathered in Tahrir Square in Cairo to protest the government of Hosni Mubarak, who held power there for nearly 30 years.

Egyptian songwriter Ramy Essam attended the protests, and turned some of the movement’s most powerful chants into the song “Irhal” (above). Essam led the song in Tahrir Square as protesters sang along with him, calling for the end of the regime.

After 18 days of protests, Mubarak stepped down. The dictator was later sentenced to life in prison for failing to stop the killings of civilians during the protests.

These historical events highlight the great power that music can have – both to create oppression and bring freedom. For the musicians and everyday people who used their voices to combat injustice, the path ahead wasn’t always a sure or a safe one, but they kept on playing and singing to fight for what they believed in.

Now it’s up to us to decide what to do with our voices. Only time will tell how our moment in history will be remembered and what our soundtrack will be.