Advice I Wish Someone Would've Given Me About Being a Career Musician: Paul Collins, the Reigning King of Power Pop 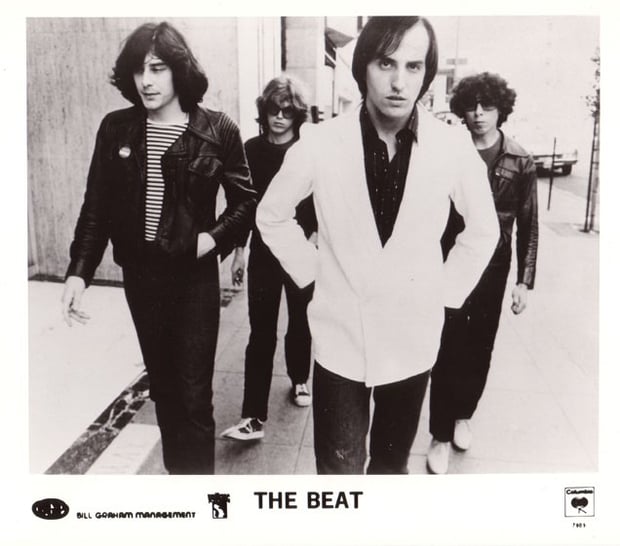 Paul Collins was a part of the genesis of punk rock in LA in the '70s. His band, the Nerves, formed in '74 and split just a few years after – but not before writing and recording "Hanging on the Telephone," the classic jam that Blondie would later make mainstream famous. He may not be as much of a household name as Debbie Harry, but in underground rock 'n' roll, punk, and garage, Paul Collins is king. The King of Power Pop, specifically.

Once the Nerves disbanded and after a short venture as the Breakaways, Collins started the Beat, which piqued the interest of big-time promoter Bill Graham. They toured with the Police, the Jam, and Joe Jackson, and released a slew of albums (two on CBS Records, a division of Columbia). In the '90s, he dropped several countrified ('60s-style) records, one of them on Sony. He reclaimed his power-pop crown in the 2000s, delivering several platters as Paul Collins' Beat. He remains very much a part of the current wave of the genre for which he was a progenitor; he tours constantly.

Aside from a few major label outings, he's remained an independent artist, especially in the past two decades. Collins has become a true champion of DIY; it's how he's cultivated a viable career for himself.

Looking back on his more than 40 years as a musician, we asked: what do you wish you'd known from the get go? From there, he readily doled out an avalanche of great advice for upstart musicians. Anyone aiming for a long-term career in music will likely find his insight especially helpful. Check out the top five takeaways from our chat below.

"DIY today, I think, is a lot better than it's ever been just because there's a network and there's an infrastructure," Collins says. "I think the most important thing is connecting to your network."

Collins' circle includes primarily garage, punk, power pop, and rock 'n' roll bands. (Think labels like Burger, Lollipop, HoZac, Suicide Squeeze, Slovenly, etc.) There's some mingling with other styles of independent music, of course, but his is easily its own specific realm. Finding the community appropriate for your own sound and M.O., Collins emphasizes, is a boon to booking gigs.

"It's important to identify kind of what your genre is," he says. "There's bands doing completely different things than what I do. Maybe sometimes they play the same clubs, but it's not the same people that move them. I think it's really important to identify your audience and what clubs and what bands move in that world so that you can become familiar with them – so you can look for work."

[How to Nail Your Networking and Have Genuine Interactions]

2. Earn cred by hitting the road

"If you just look at the panorama, the bands that are out touring are the bands that everybody in the business take seriously," Collins notes. "If you're willing to tour, and you can get it together to tour, that says a lot."

It's widely understood that nowadays, in this digital age, touring is a more viable money maker than selling music. Even bands and artists in the big leagues are on the road. "That's the only thing you can't download – a great show," he says. Not only is touring your best bet for generating income, but also it's a great way to earn credibility in the eyes of booking agents and record labels.

"I think the best route for a band, if a band is really serious, is to go out and prove yourself on the road. It's like they say, how do you get an agent? Don't. They come to you. And it's true," he says. "You start touring all the time, and you start pulling in numbers, believe me, agents will call you. That's their job. Their job is to find bands that can make money. Because there's plenty of them that don't. They want bands that can pull in a crowd. If you're working regionally or nationally or whatever, they'll find you."

"The key to touring is understanding how to keep your overhead low," Collins says. "At this stage in my life, this is how I make a living. I can't tour and lose money. I just can't. I don't have another job. So I have to figure out how to tour and come home with some money. And this is not getting-rich money, this is surviving, paying for rent, paying for food, gas, food, groceries.... I had to learn how to work within the confines of the kind of money that you can make in the clubs and balance the budget."

The deals you make with booking agents, talent buyers, and club owners are important, of course, but how you spend throughout the course of the tour is crucial. It's the difference between coming home broke or with money, Collins says.

4. Share gear with local bands in the cities you're playing

Instead of lugging around an entire drum kit, share with other bands in each city you play. Be sure to get confirmation from one band per show well in advance. "I live in NYC, so nobody I know owns a car, so you rent a car [to tour]," he says. "But you can rent a cheap car, a four-door car, and go to a gig and throw the amps in the car, and cymbals and snare...and you share."

Sharing equipment streamlines set transitions too, he notes, and that most of the musicians in his community are totally on board with lending gear.

"There's nothing wrong with that, it's not abusive or anything, especially if you treat the other bands' gear with respect. It's the only way. It's just the only way. It's that or just stay at home. Fortunately, most of the bands I work with, they understand that, and there's very rarely a problem of sharing gear," he says. "It's part of the relationship between the touring band and the local band. And there's nothing wrong with that. If you can't work out a sharing situation in a particular city, try booking a club with a backline available."

5. Fully commit to being a career musician

"At the end of the day, we're talking about a lot of hard work," he stresses. "You've got to really want to do this. This is only for people who really want to do it....You've got to love playing music. It's a lot of hard work. That's the first question you've gotta ask yourself: Do you really want to do this? It's got to be something that's in your blood, that you want to do this, it's what you love to do, and you're willing to take the gamble to have this kind of lifestyle. There's no security, there's good days and bad days, and there's no guarantees of anything. If you love playing music, and you love touring, and you love jumping onstage, and...if you're willing to do that, and you don't care, because this is what you absolutely love to do...[that's] the common denominator."