7 Resolutions All Independent Musicians Need to Make This Year 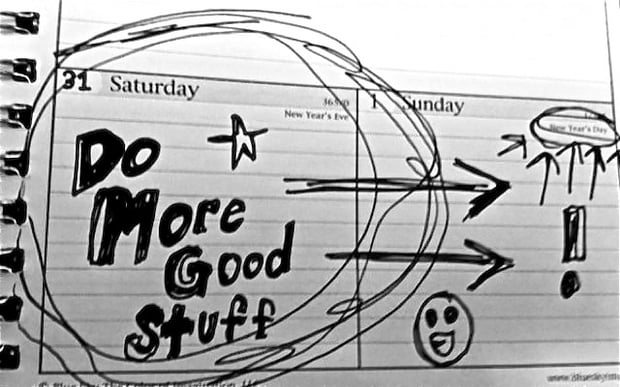 When turning the page to 2016, make some easy resolutions that will give your career a boost. (Image via simplyareadingjournal.blogspot.com)

The new year is a time when people pledge to make positive changes in their lives, and as an indie musician, you're probably thinking about what you can do in 2016 that can help further your career. Knowing that the lives of most indie artists are insane, here are seven resolutions you can make that aren't all that difficult to follow through on and can greatly help your career.

For a lot of folks, just the word "budget" alone is scary, and for a musician who may not have a steady income, it may seem about as realistic as unicorns and million-dollar record contracts. That said, while you will never ride a unicorn down your city's streets (sorry), not only can you create a budget, but you need to if you want your career to grow.

This is a case where the old saying "it takes money to make money" comes into play. Want to hire a publicist? That takes money. Want to press up vinyl, CDs, or drop cards? That takes money. Have a cool new image you want to put on a T-shirt? That takes money. Creating a budget and setting money aside specifically for your career can make all those things happen. Sure, crowdfunding sites exist, but while Kickstarter is nice, being self-reliant is better.

Brunch & Budget founder Pamela Capalad explains how artists should approach their financial situation: "Before an artist sets savings goals, they should consider setting income goals," she says. "By tracking your income goals, you can accurately measure growth. From there, you can identify the months you expect to make more and can plan to save in those months. You'll also be prepared for the leaner months to either spend less or hustle harder."

As an indie artist, you have to do a plethora of business-related things that have nothing to do with the actual creation of music. Sometimes doing those tasks can seem like a hassle, but they're crucial if you're going to further your career.

When I spoke with Michael McKnight of Soulidium for an article on what happens to artists when the label they're signed to goes under, he noted that learning the business aspects of the music industry has been key to the band's survival. "We started learning things like social media, webmaster skills, video production, media creation, tour management, promotion, etc.," he says. "For our new album, Awaken, we have a great team assembled, and a much better command of things than we did in the beginning when we were inexperienced and unconnected."

Take on mastering one new work-related skill, and you'll reap some nice rewards.

3. Spend less time on your phone

Your phone can be your GPS, your camera, and the way you sell your merch. What it can't – or at least shouldn't – be is the way you spend your free time. This is because if you're spending too much time staring at that glowing screen, what you're really doing is killing your creativity.

Research has shown that boredom unlocks a creative mind, and by spending all day playing on your phone, you're not allowing that part of your mind to be opened. According to an article on readwrite.com, "Numerous studies and much accepted wisdom suggest that time spent doing nothing, being bored, is beneficial for sparking and sustaining creativity. With our iPhone in hand – or any smartphone, really – our minds, always engaged, always fixed on that tiny screen, may simply never get bored. And our creativity suffers."

So while your phone can be very helpful in a number of ways, don't be afraid to put it down when you aren't really using it. Scrolling through Facebook may be preventing you from coming up with your next great song.

All artists should be attending shows that aren't their own. I'm not saying you need to be out every night. In fact, you can plan one night per week, or every two weeks, to hit up a show, if that's the way your schedule works. But however you do it, get out there and check out what other musicians are doing. Not only does creativity breed creativity, you're going to meet more like-minded people and quite possibly find some new artists to work with.

You can connect with folks all day on social media, but nothing will ever replace meeting someone in person, shaking their hand, and having a conversation. The best way to make those real connections is by going to more shows.

Whether it's hitting the gym, eliminating fast food from your diet, or kicking a nasty smoking habit, making a healthy choice will pay incredible dividends when it comes to your music career. You'll have more energy onstage, better breath control when performing, and become an overall better artist.

When I spoke with country rapper Jelly Roll about his incredible weight loss, he said, "It's unbelievable how much better my life is right now with just that 100 pounds off. I feel better. I'm faster on my feet. Just everything about me, I walk up a flight of steps without feeling like I'm dying.”

All that and a better live show? Why wouldn't you do this?

Nothing is more boring than the rapper who only listens to rap music, or, on the flip side, the singer-songwriter who refuses to listen to rap. There's something good in every genre.

Now, I'm not saying you have to investigate every genre, but checking out a form of music you don't perform will not only have you finding parallels between the genres, but it will expand and inform your own music. No matter how outside the box you think you are, if you're only listening to the genre you're performing, you're staying within its borders without even knowing it. Bust through those borders by making a conscious effort to listen to something completely different.

The life of a musician can be a difficult one. One way of coping with this is by reading about what those who came before you went through. You'll find that, before the fame and fortune, their lives weren’t so different from yours. In fact, some may have gone through far worse before becoming a household name. Reading someone else's story can put your own into perspective, and let you know that not only are you not alone, you're in very good company.