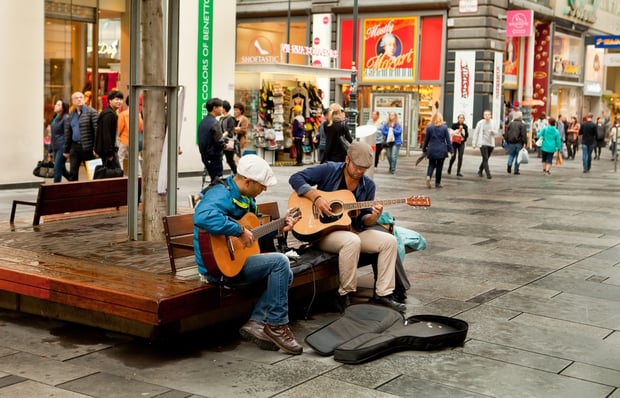 Elizabeth Gilbert’s newest book, Big Magic, is a tough-love manifesto for the struggling artist. If you find yourself in that struggling artist category, and let’s face it, you’re probably in that majority, then I urge you to read on.

I read Gilbert’s book and found myself nodding in agreement with a few unexpected outbursts of, “Yes. Yes. Yes.” The seven rules below are just a few points I took away from the book. Some help you move forward, and some may be holding you back.

1. Lay off the booze

I can hear you groaning in disagreement. “But, it’s the music biz.” You’re at gigs surrounded by booze. How are you supposed to not drink in an industry that makes rock ’n’ roll and a good drink synonymous?

I’m by no means saying you should lay off booze altogether, and honestly, that would make me a hypocrite. I'm saying to take a look at how it’s affecting your music career. If you have, “I don’t have any money” running on constant loop while you buy three to four drinks a night, I don’t think I have to tell you where that money may be going.

And that’s just the money side. How much time do you devote to nursing a hangover the next day? Or how many times do you put off working on both the creative side and business side of your music because you opted for a good drink instead?

If any of these sound familiar, it’s time to reevaluate your priorities and whether the booze is preventing you from meeting them.

In my 20s, and in a lesser degree in my 30s, I surrounded myself with people who were constantly dramatic while I coined myself the fixer. Whether you're on the side of the person creating the emotional catastrophe or the one who deems to fix it, you’re ultimately sabotaging your future.

Most catastrophes are self-inflicted mind games where we convince ourselves things are much worse than they really are. When I finally chose to only surround myself with healthy relationships, the drama stopped and I was able to focus on all the things that would actually make a difference in the long term.

First, ask yourself how much time is being taken up by these distractions and what you could be working on otherwise. Look around and ask yourself if the company you keep is healthy to live a creative life.

3. Love what you create

I was researching media outlets the other days when I landed on a playlist Sunflower Bean created for the Wild Honey Pie. The playlist, 10 Songs Sunflower Bean Listens to On Tour, includes her song, “Easier Said,” at the top of the list.

I had to let out a little chuckle, but that’s loving what you create in a nutshell. I mean, how cool is it that she would love her own song enough to include it at the top of playlist for a song she listens to on tour?

I don’t think I have to state the obvious; we're in the midst of a political climate where grandiosity, blame, and shame reign supreme. Take that as an example of what not to do. No one wants to deal with a band’s giant ego, and that's a sure fire way to get blacklisted.

No one owes you anything so don’t run around flaunting your superiority complex. The real way to get ahead is by being humble, gracious, constructive, and to work as hard as you possibly can.

Also, avoid the blame game. It’s easy to say that it’s someone else's fault you’re not getting ahead. The truth is making it in this business is really a combination of luck, hard work, and good timing.

[How to Be a Confident Musician Without Being Cocky]

5. Support others in their creative efforts

I’ve been fortunate enough to see what the power of community can do for individual success. It may seem counterintuitive to think that by helping someone else you may actually be helping yourself. But that's how it works.

I find cities that have a strong music community where the bands and music industry professionals seemingly want to help each other are also more savvy about the business side of music. As a result, the bands are often able to positively move forward toward their goals. I’ve also seen communities where bands take an every-man-for-himself approach and most of the bands are stalled.

Years ago, I created, Green Light Grow, a group for bands and music industry people to help each other grow. I’m in awe every day of how the people in the group are so willing to answer each other’s questions and support each other even when there’s nothing in it for them.

[How to Be a Good Music Citizen in Your Local Scene]

6. Measure worth by dedication, not by successes or failures

It can be a slow and painful path to becomng a musician when you're solely focused on what you have or haven’t achieved. In fact, it can be downright discouraging.

Instead of focusing on where you’re not, ask yourself everyday why you’re doing this. I doubt it’s for the fame and fortune. The dedication should be to making great art where you genuinely enjoy the process.

If you’re not where you want to be, then it’s time to take a good, hard look at what’s holding you back. Most likely, it isn’t about your talent but your dedication to your talent.

7. Battle demons instead of gifts

If you’re a musician, chances are you’ve experienced a variation of the following scenarios: a record label, blog, or festival rejecting your music; people in your life telling you you'll never make it in the music business; or you telling yourself you're not good enough.

If you let them, these negative forces will make you second guess your every artistic move. These are all opinions. Learn from them and focus on how you can grow and improve your craft.

All of this boils down to dedication and determination to your music and how you approach it. Ask yourself if any of these rules are impacting your music career negatively. If so, change something!