7 Ways I Use My College Degree in My Music Career 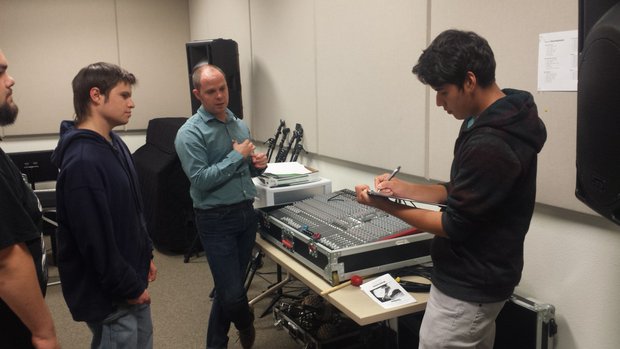 This article originally appeared on Living on Gigging.

I'm writing this for anyone who has changed his or her plans after graduating from college. For anyone who has studied one thing and has gone on to do something slightly (or extremely) different. And especially for anyone who, like me, has gotten a lot of crap for making those choices.

I'm here to tell you that all that crap is, well… crap. What I've learned is that no matter what you do, you will use your college degree. I promise. I use mine every day in every aspect of my music career. And somewhere in the back of my mind, I've always known this to be true (or at least hoped it was true), but I just didn't know exactly how until now. I've finally been able to put my finger on it, and it's changed the way I view every move I make.

Before I start, let me preface with this: I was never a genius, a prodigy, or even a high schooler who studied for the sole purpose of getting into college. I was just an okay student who happened to have many other interests. Cornell University was, as my guidance counselor told me, a "reach" school. But just like I advised you to do earlier, I ignored her crap, applied early, and got in. (Take that, guidance counselor!) I always knew that Cornell was a great opportunity, and I have never taken it for granted.

So you must understand my sadness when, a few years after graduation, I started to hear whispers, insinuations, and outright accusations along the lines of, "Why are you wasting your college degree with music?" Friends, boyfriends, neighbors, and even a few voices in my own head started to question what I was doing pursuing music instead of biology, law, or research.

At first I was confused and took it personally. I felt as though I had made a bad decision (or several bad decisions). But now, years later, I know that I most certainly am not wasting my college experience, and I've even proved it to many of my retractors. I finally got a real answer to the question, "How are you using your degree?" Well, I got seven answers, really. Here are the seven ways I use my degree every day.

1. Splitting my time between multiple streams of focus

When you love something and you want to succeed at it, you're told to focus and work hard. So in college, I did just that, really focusing on my biology major. Luckily for me, however, my advisor noticed that I was taking all my elective classes in the music department and that I was only two classes away from completing a music major as well.

Music had always been a part of my life. I had played the piano since age two. I had composed piano and choral music, and I had sung in choirs and school musicals. But I had always thought it was a kid's hobby. I loved science, and I was sure I would become a marine biologist or work in coastal marine policy or something fancy like that. So I was pleasantly surprised to learn that I could study both music and biology. With two majors, a spot on the crew team, a position in an a cappella group, and a part-time job at the local bar, I was definitely making the most out of my college experience. Today, I use my ability to diffuse focus when working on my many endeavors, including songwriting, composing, writing, branding strategy consulting, being married to a mountain climber, and taking lots of long baths. Another piece of advice: take baths.

[4 Habits of Successful People That All Musicians Should Adopt]

When you're a biology and society major, you write papers on evolution theories, the newest shipping marine laws, and why the population of amphibians in the Great Lakes has decreased. In four years, I wrote volumes worth of papers comprised of facts, details, arguments, more facts, opinions, and even more facts, and I double-checked them for grammar and cohesiveness. I use these skills in every aspect of my business – in every new pitch email, article, and social media post. In any and every job you have, you'll have to write something. And you'll move to the next level if you can write well. No matter what you study in college, the skills you develop while cranking out that 10-page paper that you didn't start until the night before it was due (we've all done it) will follow you everywhere you go.

Everyone has a support system – they just need to know how to access it. Cornell felt like a big school for me, especially coming from a high school class of 60 students. For reference, Cornell hosts just under 15,000 undergraduates; it felt like its own city to me. It could have been easy to fall through the cracks there. But luckily, on day one I was assigned an advisor, and unlike many students, I made sure to use him as a resource. Without my faculty advisor, I wouldn't have known that I could double major in music. He helped me achieve my goals and make the most of my college experience, and I still keep in touch with him to this day. He helped me realize that double majoring would give me a new context for what was once a hobby. It was the start of looking at music as something more, which led me to where I am today.

When you're a science major, you quickly learn that you get the best results when you only change one variable at a time. In my music career, I have spent a lot of time "throwing spaghetti at the wall," seeing what sticks and what doesn't, what initiatives, campaigns, tours, records, and pitches turn into results, fans, and income. When I look back on my old biology labs, it reminds me to keep going and to make small changes rather than scrap a whole idea just because it didn't work once.

5. Following a path… which leads to another path

In life, every path can lead to another, which can lead to another and another. You'll travel down many roads, and you may end up somewhere entirely new. This doesn't mean that your original path was wrong. It doesn't mean you failed that first path either. I am where I am and doing what I love because of every move I made in the past. And college was the first step toward all those other steps. Whether I can identify these moves clearly or not, I made connections, learned things, and chose new ideas that led me to here.

6. Knowing which things not to do

When you have 600 pages of reading, two essays, and a crew race over the weekend, the chances of getting it all done are pretty much zilch. It became clear to me in college that choosing what work to let slide was not just necessary, but a skill to be perfected (though your professors will tell you otherwise!). I honed this ability at Cornell, and I now use it every day as a musician. Does this mix need to sound perfect even though we're just listening to the arrangement? Do I need to reply to this email now (or ever)? Will plastering downtown with show posters actually make a difference other than sucking six hours from my life? You will often be tempted to try to do everything. Instead, skimp skillfully. Applying to your career the ability to skim the reading just enough to make your way through class discussion will help you more than you think.

You can absolutely do what you're passionate about, whether you do it as a career or as a side project. This is related to the multiple streams of focus. You never really have to decide which thing to do, you just have to choose which things (plural) to do and when. I always thought that I was bad at making decisions. Because I kept choosing "both" or "all of the above," I thought I wasn't actually deciding… until I learned that I wasn't making decisions at all. I was simply making choices about how to do all the things I loved. While choosing two majors instead of one freed me from the burden of deciding between them, I wasn't avoiding a decision – I was choosing my own lifestyle. Every day in my music career there are problems that feel like "either/or" choices, and I've learned that sometimes it's an "and" choice. And that's okay.

Overall, learning that I was in control of my college experience has shown me that I am responsible for my career results. While my career choices are not the ones my parents predicted and certainly not the ones my friends chose, they are my choices. Each choice has led me to the next open door. Cornell provided a series of open doors and not one of them said, "This is the right door." So I followed my instincts, took chances, and here I am years later, happy and actually making a living doing what I love. And while it may seem like college was an unnecessary step in that journey, I don't think I would be where I am today without the training I got during those four years. So enjoy college and do the things you love. And if anyone tells you you're doing it wrong, tell them to check back with you in a few years.

Are you a recent music college grad? Check out these seven invaluable pieces of advice.

Cheryl B. Engelhardt founded CBE Music, a music creation and sonic branding firm, and has produced her own piano pop records, toured around the globe, has had dozens of TV placements and scored multiple films and commercials. Passionate about supporting musicians, Cheryl hosts popular workshops, video trainings, and other valuable resources on her website, In The Key Of Success. Get her free PDF for insider tips on how to make it in the music biz.