Are You Assaulting Your Fans on Social Media? (Part One) 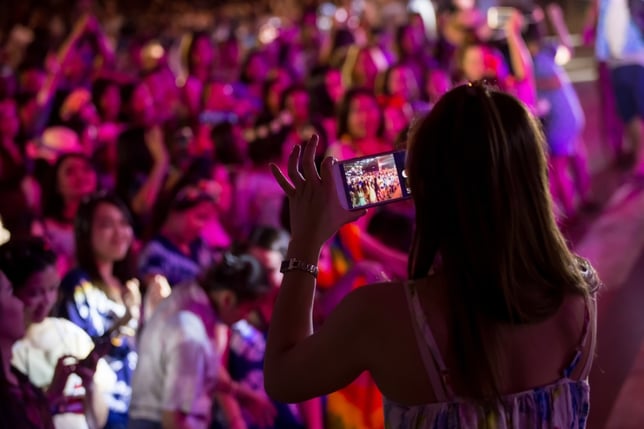 It goes without saying: You shouldn’t assault your fans either physically or sexually, but there’s a more subtle way you may be assaulting your fans every single day, and you’re most likely not even aware you’re doing it.

Let’s take a look at your Twitter and Facebook profiles. Is it a constant stream of show announcements, crowdfunding requests, or requests to listen or buy your music? If that’s all you’re doing on your social media — I hate to be the one to tell you, but you’re assaulting your fans.

Start by defining who your fan is — what do they like to do besides listening to your music? Get as specific as you can, down to giving that fan a name. Maybe your fan, we’ll call her June, is trying to get into shape. She’s joined a gym, but it takes every ounce of her to put on her workout clothes and head out the door.

She downloaded a random Spotify playlist to get her through her workout, but it’s anything but motivating. Animal Collective gets her going, but she can only listen to “My Girls” so many times on repeat. You may be thinking right now, “What does this have to do with my music?” That’s the point: This isn’t about you. It’s about how your music can serve her lifestyle.

Now that you’ve identified your fan, it’s time to learn how to build the relationship and show the value in having your music be a part of their life. This happens in stages. The first four stages begin with someone who doesn’t know who you are to making the first purchase. In this case, our overall objective is to sell those amazing hoodies you made for your next tour.

You have to ask why she would want to invest her time into listening to your music over every other band out there. Make a list of all the reasons your song would be great for a particular setting. Is it a great song for a workout routine? A love song for a romantic night? A song for someone who just went through a breakup?

Write your post on social media targeting why the person should download your song based on that setting. Let’s take the case of Animal Collector-loving June who is desperate for a playlist to motivate her to work out. If you properly defined your fan, chances are if she likes Animal Collective, she’d also like your music.

To create awareness you could give June exactly what she needs: a super motivating Spotify playlist that not only has her favorite song, “My Girls,” but your song and a 30-minute set of other songs she could like and that would get her through her dreaded exercise routine.

Chances are June has no idea who your band is and isn’t going to find your Facebook page on her own with that fantastic playlist. You’re going to need to run some ads targeting her areas of interest.

When you begin with awareness, the hope is you take the fan to the next stage of engagement. In the above example, June may have listened to your Spotify playlist and tried it out at the gym during her next workout. How can you take her engagement to the next level? Maybe it’s reposting that playlist and asking what song got her through her last workout.

I know this seems counterintuitive to focus on anything but directly selling your music, but again, this isn’t about you. It’s about your fans, so you need to always look at it from their lens. I promise, once you’ve made it further into the relationship you can make it about you, and you won’t even have to work at it.

At this stage, you’re also assuming the fan is already aware of you, but you still need to create a post that makes the person want to engage with your band in some way. The download is an obvious way, but what are other ways you can create engagement so you’re not exhausting your fans with the same content?

I hate to be the one to tell you this, but even if you’ve created awareness and engagement, you’ll lose those fans if you don’t find a way to stay engaged and consistently communicate with them. They will forget about you.

Chances are, your Facebook posts and tweets aren’t even showing up in their newsfeed. You should always be looking at how you can consistently communicate with your fans so they don’t forget about you with the onslaught of new music. The best way to do this is to have people subscribe to your mailing list.

By now, you should have June on your side. She’s following your workout playlist that felt like it was made just for her. She loves your song. Now is time to give her the real deal. Give her the opportunity to receive a download of the song for free when she signs up for your email list.

The key at this stage is to move the fan who is listening to your music on Spotify to make a small purchase to support your band. The relationship is still new, so you still don’t want to push all your latest shows, crowdfunding campaign and new album on the fan.

The truth is that it’s increasingly difficult to create enough incentive to purchase music when it’s so readily available on Spotify platforms. That said, if you understand what is important to your customer and her lifestyle, you can create something that she will want to purchase.

Let’s pay June another visit. We know June is working hard to get in shape. You’ve given her a great Spotify playlist and a download of one of your songs. You’ve engaged with each other on Facebook. You know she struggles with getting motivated to the gym. You have amazing 100 percent cotton T-shirts that would make working out a bit more comfortable.

When you are trying to get someone to purchase for the first time, you also need to give a really sweet deal, knowing you may only break even. In June’s case you could offer a 50 percent off coupon for the T-shirt. The key is to make the discount solely for a first-time purchase.

Your goal in every stage is to get the fan to the next level and in some cases you’ll be able to take them from two-to-three stages with one promotion. For instance, if you targeted a fan of a band similar to you and offered them a free download when they signed up for your newsletter, you could take them from Awareness - Engagement - Subscribe. Generally, I suggest avoiding skipping steps at that early stage because you could scare more away than you could attract.

Bonus! We created an Animal Collective centric Spotify workout playlist for June to give you an idea of how to do it and format your description. If you’re looking for a little workout motivation of your own, give it a follow.

In part two of this three-part series, I’ll show you how to create excitement with your fans once a purchase has been made and how to start making sales on the infamous hoodies.