The 4 Rules for Following Up on Press Requests That Music Publicists Live By (And You Should, Too) 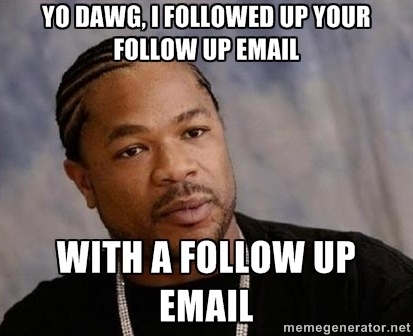 If you're doing media outreach on behalf of your band since you don't have a publicist yet, there are some general unspoken rules and etiquette for following up on your initial outreach, pitches, and requests. These are also the general guidelines that most publicists use, with exceptions, amendments, and flexibility applied to the situation based on relationships, time sensitivity, marketing initiatives, and beyond.

But the one golden rule that trumps 'em all is: be polite without being a punisher. Simple politeness and not acting as though you're owed anything are key elements here. Here are the basic rules to follow.

Editors and writers are busy. They have deadlines, copy to file, interviews to conduct, and pieces to write, in addition to answering emails and listening to the new music which they're sent and inundated with daily. There's a lot of ether to sift through, and competition is fierce. These writers also have publicists following up with them. So give whatever pitch you send them – be it information or music – a minute to marinate and to make it to their eyeballs.

If you're cold-calling an editor and don't have a previously existing relationship, don't expect them to read and respond to your request immediately. If there's no prior relationship in place, you will have to learn to hurry up and wait. There are cases where you might be pleasantly surprised and get a quick response, though! It's just a matter of the individual you've contacted and his or her schedule, workload, preferences, and protocol for responding.

So be patient, wait a week to 10 days, and then send a polite follow-up. (Note: email is generally the best way to do your outreach). Don't send an email the next day, unless there's some level of time sensitivity. That would make you a punisher.

2. Don't expect anything (including a response)

Don't ask the person you've pitched "when" they plan to cover something when you reach out to follow up. You're making the assumption that they want to cover it. Instead, ask them if they had a chance to check it out, what they think, and if there are any plans for coverage. Those are simple questions a publicist would ask, and answers can be given with quick and easy replies.

But remember this: no one is obligated to respond. So if a member of the media doesn't hit you back, don't take it personally. Because it's not personal. While I don't like the "no answer is your answer" approach, you sometimes have to accept that as the case. And as stated earlier, if you don't have a relationship with certain media members like a publicist does, they might not be so quick to get back to you because of time constraints and other factors. If they already have worked with you and do business with you, there might be a quicker reply.

After sending your initial email, only follow up twice. Make your third follow-up about two to three weeks after the initial outreach. If you don't hear back after that, let it go. Sure, there's the distinct possibility that your email may have gotten caught in a spam folder, or may be buried at the bottom of a very full inbox. But chances are it likely was quickly viewed. If it didn't elicit a response, the person may not be into it. So move on.

I easily have 1,000 messages from people I don't know in my Facebook message inbox. It's mostly people asking me to check out music. I just can't get to it all due to volume and my work and personal commitments, so I have to use the unspoken rule of ignoring Facebook messages that are music requests. It's just too much, and Facebook isn't a business application for me. I also randomly notice, months later, that random bands respond to Instagram photos and videos I post from my clients' shows, asking me to check out their music. That might be a cool way that some social-media-active people find music, but it usually isn't for me personally.

Some media types don't mind using social media to connect with bands, especially via Twitter, since it's quick and easy to start a back and forth. Others are very anti. So don't go that route unless you have a back and forth with a writer or feel confident this method will work.

Those are some general rules to live by when it comes to press follow-ups, but of course there are plenty of exceptions. Just use your gut and context clues when trying to get someone's attention. But always be polite.