Boston's Biggest Stage: Everything You Need to Know About Busking 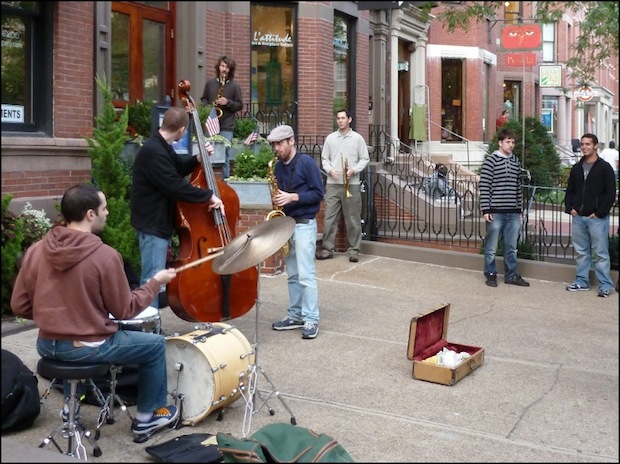 There are over 1,600 miles of sidewalk in Boston, arguably making sidewalks your biggest and most accessible stage. Busking, as street performing is traditionally known, is a great way to get in front of people and work on your stage presence. Even Amanda Palmer once graced the sidewalks of Harvard Square in Cambridge as the living “Eight-Foot Bride” statue. In her TED talk, Palmer extolls the benefits of having exposed herself to the generosity of strangers and how it helped her artistic development and career as a performer.

Busking is alive and well in Boston, and it'll give you the opportunity to demo new songs in a low-risk environment. Find out about the regulations affecting street performances in and around Boston, and how to get started as a successful busker.

Apart from staying warm in the winter, being a subway performer tests your ability to quickly grab an audience's attention. According to the 2014 MBTA Blue Book, there are more than 750,000 riders waiting to hear you perform on an average weekday. If making people's commutes a little more enjoyable isn't enough to convince you busk underground, then imagine trying to find other venues that offer such a large, captive audience!

All you need to get started as a subway performer is a $25 permit from the MBTA. To get the MBTA Subway Performers Permit, you will need to make an appointment to visit the Massachusetts Realty Group office and present two IDs, a recent piece of mail, two character references, $25, and your permit application. Your photo ID permit will be good for 12 months, and will give you first-come, first-serve access to more than 60 locations throughout the network of MBTA stations. Keep in mind you will have to play by the MBTA rules, including: look neat, pay your fare, keep the sound level below 80 db(A) at 25 feet, no trumpets or drums, bring your own power, and perform only in designated areas.

Boston is a city of walkers with over 20 million visitors per year. The city's 1,600 miles of sidewalk space is enough to run a continuous sidewalk from Boston to Miami, according to the City of Boston Department of Public Works.

With dozens of museums and tourist attractions in one of America's most walkable cities, Boston provides lots of opportunity for buskers. Popular performance spots include Copley Square and the bridge over the pond in the Public Garden, but considering the vast amount of musical talent in Boston, there are hundreds of other spots throughout the city that are underutilized. When considering performance locations, search maps for areas of high foot traffic – these might include shopping districts, museums, parks, restaurants, and popular walking routes such as the Freedom Trail, Walk to the Sea, or Harborwalk. Foot traffic is especially high in areas near large museums and historic sites. The 3 largest Massachusetts museums by attendance are located in Boston, which each enjoyed well over one million visitors in 2013. Areas around the New England Aquarium, Museum of Fine Arts, and Museum of Science could all make enticing performance spots as well.

No permit is required to perform on the sidewalks and parks of Boston, but that doesn't mean there aren't any rules – local noise and safety ordinances still apply. These regulations limit things such as how loud you can play and prevent you from blocking the sidewalks, streets, or building entrances. In Boston, municipal noise ordinances limit amplified sound to 70db(A). You can tell if your band is louder than 70db(A) by downloading one of the many decibel reading apps available for smartphones and tablets.

According to Stephen H. Baird, executive director of Community Arts Advocates, there are several documents you can show to police if they try to discourage you from street performing. Links are available in his detailed history of busking/street performing in Boston.

Be a tourist attraction at Faneuil Hall Marketplace

Quincy Market and Faneuil Hall have everything necessary to ensure that street performers have a large, willing audience. The area is a combined historic attraction, shopping district, and tourist area with over 18 million visitors each year. Performance slots are so exclusive and highly sought after that auditions are held every spring to determine the lineup. Performances typically include a mix of musicians, jugglers, human statues, dancers, and acrobats.

To become a Faneuil Hall Marketplace street artist, you will need to submit an application and get selected at the live auditions. Applications are due in mid-April and must include two video samples, two references, and a headshot. The live auditions are by invitation only and take place in early May. You can apply as a full-time, part-time, or traveling performer, depending on the number of days you would like to perform. As an approved performer, you will be allotted certain days and time slots, with the added benefit of having your picture and a hyperlink displayed on the Street Theater section of their website.

Busk among the Ivy Leaguers at Harvard Square

In addition to being in the heart of a vibrant academic community, Harvard Square is also a major tourist destination with busloads of people snapping pictures of the ivy covered buildings. Because Harvard Square is located in the city of Cambridge, you will need to get a permit to perform there.

Getting the Cambridge permit is easy, and you do not need to be a resident of Cambridge to apply. Permits cost $40 and expire at the end of December of the year they are granted. The street performer application is available online, but must be submitted in person at the Cambridge Arts Council office. The application is simple, only requiring basic contact information and a few details about your performance. If there is more than one person performing, each person must apply for a permit and display it when performing. Regulations including approved performance hours and and noise level are available in the Street Performer Ordinance.

In addition to granting you permission to perform in Harvard Square, a Cambridge street performer permit also opens the possibility of performing in areas such as Kendall Square, the dwelling place of many creative startups and big tech companies such as Google.

Aside from landing a prime performance spot, there are a few things you need to know to maximize your success as a street performer: