Demystifying the Dark Art of Mastering: A Conversation With Paul Logus 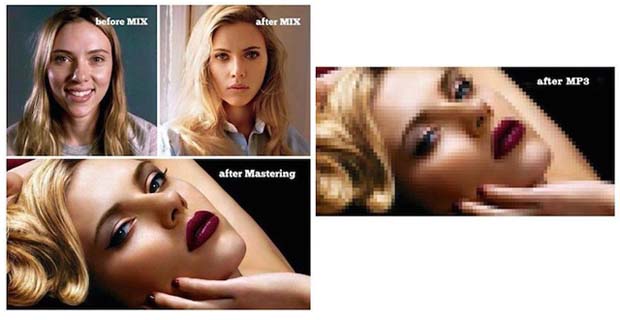 So there's this audio nerd meme starring a promising young ingénue named Scarlett Johansson that perfectly illustrates the three main stages of producing music: before mix, after mix, and after mastering. In each picture, Johansson looks progressively glamorized – an evolution that begins before makeup and ends in a stylized portrait. That is, until the fourth picture – MP3 – that finds the "mastered" photo vulgarly pixilated. So it goes.

Mastering is the final step in getting your album ready for manufacturing. It's a service that’s both practical and mysterious: the former because you'll have to be settled on your mix, the track titles, the running order, the space between songs – the things that make the audio journey complete. The latter because this is where the last bit of sonic polish is applied to your music. Like that stylized portrait, this is where every last detail is put perfectly in place. It's the icing on your aural cake.

Mastering a record requires a different mindset – and, often, hardware – than what your typical recording engineer might have at his disposal. And though many engineers can master a record, a great mastering engineer is often coveted. Once such engineer is Paul Logus, who you may recall from my recent posts about making vinyl.

Logus is a producer's producer. He's worked with everyone from legendary artists like Pantera, Public Enemy, the Notorious B.I.G., Blondie, Anthrax, and Mary J. Blige to up-and-coming indie rockers Wray as either a producer, mixer, or the mastering engineer. From his start as an in-house engineer for legendary New York City studio The Hit Factory to his present day operation of his own mastering studio, Logus continues attract supreme clientele thanks to his amazing attention to detail. Whether it needs to shimmer or thump, Logus always takes his projects to the next level. I know because I've had the privilege to work with him on several occasions. The man does not disappoint, and he's a swell guy with a bunch of cool stories.

Below is his take on the mystery of mastering as well as some practical information about what bands and producers can bring to the proceedings.

Mastering is the final step in creating a finished product for release. I am your sonic guardian angel. I look at the album as a whole, making sure there is overall continuity, and the songs will translate to the intended format (CD, online, vinyl, radio) as best as possible. I achieve this with an analog mastering console, using level control, EQ and compression.

Sometimes I'll give the tracks a little help, if needed, so they sound just as great at "full scale." Things change at competitive levels (see: The Loudness War), so you must adjust to keep things intact and avoid distortion.

Another goal is to make things sound the way the producer or mixer intended. I use a very accurate playback system. I know it well. It is like a part of me. I can tell instantly what a mixer is going for and can further enhance the focus of the track if needed.

What sets your mastering system apart from a typical recording studio?

A good mastering system, like ours, is not colored and has fast-responding amps, clear and powerful sounding. If something sounds great, it is great. If it sounds bad or needs help, I can tell exactly what to do instantly.

Most regular studio systems have slower rate amps, very colored monitoring, and the preamps have much less signal-to-noise ratio. It's just fine for making records. It's a disaster for making critical sonic decisions on a mastering level, because you're missing a lot of information. You keep having to listen on other systems to see if you nailed it.

What are some things that the band/producer can do to make your job easier?

Mastering rooms have playback systems that have so much more detail, it sounds foreign compared to a traditional studio.

There is a non-sonic part to mastering that is extremely important. This involves titles and coding for the disc image master or codes on vinyl parts. If the titles are misspelled or codes are wrong, the artist will not get royalties from spins.

Be ready with tracks, alternate takes, song order, ISRC codes [unique codes used to identify your recording and are especially important for selling music online. These are sometimes provided by a label, so ask before you purchase your own], album title, and formats you need – before the session. Let me know what kind of refs [other records that exemplify the sound you're going for] are your target, if that is your goal, in advance.

Are there common misconceptions about what mastering can or cannot do?

In rare circumstance, an artist might ask for something that reads like a mix comment: "Could you bring up the guitar?" Rather than coming up with a funny answer and making them feel bad, I call up the engineer and explain what I need. They are usually grateful that I did not wreck their mix in an attempt to give the artist something that is really not possible from a mastering engineer. Everyone is happy in the end.

How are involved does the band/producer need to be in order for you to do your job?

They should be involved in whatever way they like. Sometimes a lot, and they need to articulate their ideas in words or examples of what they want. Sometimes it's very little, and they can just tell me they love it.

Do you ultimately master records you've produced or mixed?

When I was full-on mixing back in the day, I never mastered my mixes. Did not want the responsibility. I knew guys that were great at it and at the top of the game. Mastering did not make sense to me at all back then. The one or two times I tried to master my own mix, I completely ruined it.

It seems like mastering is the dark art of audio engineering. Why didn't it make sense to you back in the day?

The funny thing is, I didn't really understand what mastering is until I started doing it. The way you listen when you mix and master are two completely different processes – as different as tracking and mixing are from a classic studio standpoint. Something could sound great to you in the mix room, then going to the mastering room watching a guy work, listening on a system you don't know, and trying to have an opinion about it is really pointless. Mastering rooms have playback systems that have so much more detail, it sounds foreign compared to a traditional studio. That's what threw me for years. So, when I was a mixer, I found a mastering guy who I trusted and stuck with him as long as I could.

Do you have a mastering philosophy?

Yeah, make it sound great, and don't overthink it!