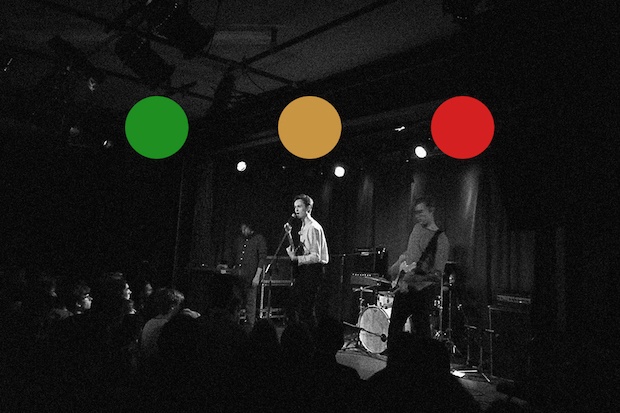 This article orginally appeared on Soundfly.

Back in high school, my senior project advisor told me, “There’s no such thing as a perfect performance.” And then immediately busted out an incredible drum solo. I’ve never forgotten that moment. I just assumed that being able to pull out a great solo on a whim meant he must be telling the truth. While that’s not quite how the world works, I continue to find truth in his words.

Thelonious Monk is famous for saying, “There are no wrong notes; some are just more right than others.” It’s true that everyone – and I mean everyone – makes mistakes during live performances. In a duet with Kelsea Ballerini at this year’s ACMs, superstar Nick Jonas played a guitar solo that ended with some very noticeable mistakes (around 0:45). But he’s a professional. He wrapped up his solo, brushed it off, didn’t get frustrated, and finished out his set like a star.

On a slightly lower profile, the Epitaph Records band Osker had an extremely noticeable screw-up within the first five minutes of their live DVD webcast back in 2000. After finishing the fraught performance, singer Devon Williams immediately jumped to the mic to say, “People make mistakes. Get over it, alright?” This came from a band on one of the most successful independent record labels of the past 30 years.

The takeaway is that even people who make music for a living make mistakes, often in front of millions of people, so you shouldn’t fret when you do. One of the most important things to focus on is how you react to your mistakes – knowing when to brush it off and move on, and when to focus on it and buckle down in practice to make sure it doesn’t happen again.

I’ve developed a system that my band and I use to identify the degree of a mistake, and what we should do about it. I call it the “Stoplight System,” and it’s pretty easy to understand.

Why do we do this? Well, it helps us acknowledge when something is just a slip of the hand, and pay attention when the mistake is indicative of a larger problem. Maybe the issue is a particular melody being overly complex or poorly written, or maybe we’re just being lazy about practicing.

When mistakes happen, it’s useful to have a system so that you don’t cause frustration by focusing on casual errors, while at the same time noticing something isn’t working in a song, before you commit months to working on it.

A “green-light” mistake is anything unnoticeable that doesn’t slow or stop the song. This can be anything from missing a couple of chords or notes to, “You played that drum roll differently than in practice.” Essentially, these are the mistakes that nobody really notices, or they’re the moments that make certain performances of a song unique.

If the song keeps going and progressing as planned, then you've made a green-light mistake. Unfortunately, I still see musicians fight over green-light mistakes. But in the spirit of improvising and finding new routes through song structure, I think they should be explored and celebrated!

An example of this can be found in the Hello Rockview DVD by the influential ska-punk band Less Than Jake. The band jumps into the second song, “Help Save the Youth of America from Exploding,” just barely off time from each other.

I’ve seen the band live and can guarantee you that the majority of people there didn’t even notice or care, and it didn’t slow the band down for a second. This, my friends, is a green-light mistake and should be no sweat off your backs.

A “yellow-light” mistake is the kind of mistake that doesn’t stop the performance, but it does slow things down. It can be painful for all parties involved to listen to, and it can literally halt the song from going at a natural pace. For example, people falling off time from one another mid-song, or someone starting the wrong part but quickly correcting themselves are yellow-light mistakes.

The biggest thing with a yellow-light mistake is to keep calm and not get too frustrated in the moment. And consider getting really focused and buckle down on nailing that section in your next practice session.

Red-light mistakes are what you should be fighting over (if you're going to fight at all) – they’re the mistakes that stop a set or a song. In my experience, the most common red-light mistakes are the result of a lack of focus, poor communication, failing to soundcheck professionally, or generally not prioritizing your performance. (One beer before before a set? Fine! Five? You’re going to start noticing problems onstage.)

I once played a show where the drummer of our band stopped halfway through a song, thinking it was over. Once he figured it out, we had to start the song again from the middle. That was a disaster.

Equipment failure can also stop a show halfway through. While that may not be a “mistake,” there are a few things you can do to minimize how big a disaster it ends up being. Packing extra gear like strings and chords in your gig bag, developing a strong soundcheck routine, and planning around things that have gone wrong in the past can all help cut down on the severity and frequency of major issues.

Whether it’s intoxication, lost drummers, or anything in between, even the most well-known acts make red-light mistakes from time to time. And while there’s often nothing you can do to prevent them, don’t just let them go either.

Red-light mistakes shouldn’t just stop your show, they should stop your next practice and give you a reason to come together as a band to figure out what went wrong, what you can learn from it, and what you can do better next time. Maybe the song’s not working, or maybe it’s just one of your bandmates who isn’t working. Either way, let go of the mistake in the moment, but come back to it with clear heads.

One last example comes, again, from Less Than Jake (who are actually one of my favorite bands, despite pointing out several mistakes they’ve made). In the Borders and Boundaries live DVD, frontman Chris Demakes started the song “Bigger Picture” in the wrong key. This didn’t ruin the set by any stretch of the imagination, but it was incredibly noticeable and they did have to start the song over.

And you know what? It’s entertaining. Because in the end, it’s still entertainment. Why do people travel hundreds of miles to see a bunch of cars race around a track in the heat? Yeah, that’s why.

One other thing to learn from all these Less Than Jake clips is that if a band can play shows for over two decades and still make red-light mistakes, you can too without them being career busters.

So what then, you may ask, makes a good performance? If everyone makes mistakes, and there’s no such thing as a perfect show, how can I measure the success of a performance?

A good performance is made by musicians who can play through their mistakes and still make a song sound good after those accidents occur. Remember that Thelonious Monk quote from before? Well, Miles Davis felt the same way, saying, “Do not fear mistakes – there are none.”

The best way to do this is to simply practice playing through the song on your own time and get to know your parts front to back. Practicing through difficult parts over and over again helps you set even the most complex arrangements into your muscle memory and will help you play more confidently and correctly the next time.

The most important thing to know during a show is that there’s almost nothing you can do about a mistake as it’s happening. Relax. Don’t give your bandmates a hard time. And figure out a system of communication (maybe based on stoplights?!) that can help your band prioritize when to get to work and when to let things go.

Next up: 5 Disastrous Mistakes That Every Novice Band Makes