Use This Pedal Guide to Find Your Ideal Guitar Tone 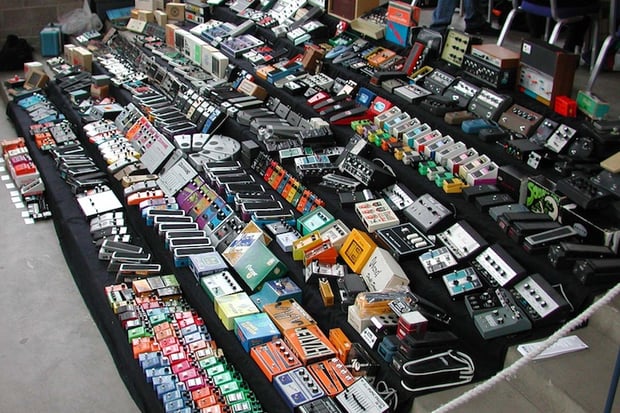 There isn't a single guitarist who can possibly keep track of all the different pedals that are on the market today. With hundreds of boutique companies surfacing just in the last 10 years, we know that the challenge isn't finding cool pedals, but figuring out which ones are right for us, so let's break down a few different types of effects you might consider for your pedalboard. This should help you define your personal guitar tone.

Note: It’s important to remember to opt for true bypass pedals whenever possible, which helps to conserve the guitar's character. Oh, and those multi-effects processors aren't doing anyone any justice. Sacrificing tone in favor of convenience is not an entry found in the glossary pages of rock and roll!

Many guitarists have yet to discover the subtle difference that a tiny bit of boost can make. Experimenting with a low gain overdrive pedal or treble booster can enrich the harmonic output of your guitar, giving some body and life to your tone. Getting into the higher gain stages will produce more "distortion" from the amp and result in a heavier sound.

A great example of a guitarist exploring the dynamic range of a slight boost is Jimmy Page; listen to the riffing on "Over the Hills and Far Away," the "Stairway to Heaven" solo, and the way his leads weave in and out during "Since I’ve Been Loving You." Snatchtronics Ovadrive: A handmade pedal from Brooklyn at a reasonable price, this pedal takes the fundamental idea of the Klon Centaur and puts it back in the hands of players not looking to spend two months of rent in one shot. This pedal works in front of any amp and simply rocks, period. TC Electronics Spark Mini Booster: One knob to rule them all! This unit takes your signal and adds gain to it. This is useful for pushing a solo, or just getting an amp to break up into the stratosphere. As an added bonus, its small stature hardly takes up any room on a pedalboard for maximum portability. Wampler Plextortion Overdrive: Creeping over the line into a full-faced distortion unit, the Wampler does have a higher gain stage, but retains a clarity most other pedals of its kind don’t, and the quality of your guitar tone isn’t sacrificed. It’s creamy and fluid, like a bowl of melted ice cream – and not nearly as fattening.

One of the most gratifying ways to push your guitar tone to the stratosphere is a fuzz pedal that is both responsive and colorful. Some fuzz pedals sound more compressed and synth-y, while others have an openness and tonal character that can change over the course of a single sustained note. A fuzz pedal should respond to your level of dynamics and will transform with the influence of the volume knob on your guitar. As the granddaddy of high-gain tone shaping, the sonic possibilities of fuzz are truly endless!

And it's an effect that's changed dramatically over the years – from Hendrix's early fuzz tones on "Foxy Lady," BB King's amp-fuzz on the Live at San Quentin album, Tony Iommi's double-tracked axes on "War Pigs," Jeff Tweedy's experimental, overly compressed fuzz on "The Man Who Loves You," to Billy Corgan's scooped Big Muff-sound on the Smashing Pumpkins' "Cherub Rock." Wren and Cuff Box of War: Wren and Cuff is a company that specializes in recreating the different Big Muff pedals of the eras, and each one is cooler than the last. As a lifelong Smashing Pumpkins fan, I gravitated towards the Box of War for its thick harmonic complexity, but all of their pedals are high-quality units and built to last. Keeley Silver Bullet Fuzz: A high-end, tone-bender-style fuzz unit that produces wild overtones at high gain and has a nicely compressed voice. Its expression will change quite dramatically with your picking hand and the input level from your volume knob.

What can be said about the impact that delay has had on music? For guitar players, stepping on a delay pedal can be a bit like stepping back into the unknowable void. From a simple slapback to the fluctuations of an '80s-style digital delay to the psychedelic reverse delays, the options are unlimited and guaranteed to produce ideas and take your playing to new heights.

U2's the Edge is a guitarist who has become synonymous with delay effects; look no further than "Where the Streets Have No Name" for a prime example of how delay can be used to create rhythmic layers and texture. David Gilmour's solo on Pink Floyd's "Time" is a masterpiece in lead delay. And for a modern take on the effect, the War on Drugs' album Lost in the Dream is chock full of lush, cinematic soundscape delays. Boss DD-7 Digital Delay: An impressive variety of options are included in this utilitarian delay unit, which can emulate many of the delays that have come to shape modern music, such as modulation delay, reverse delay, and tap tempo. Strymon El Capistan Tape Echo: With an impressive roster of quality pedals on the market, Strymon developed this pedal to emulate the character of magnetic tape to create sought after studio sounds. This pedal is incredibly functional and fun to use, and can create everything from gorgeous shimmers to funky warbles. No matter how much time you spend with it, it'll continue to surprise you! DLS EchoTap: Another easy, no-nonsense machine, the DLS is a stereo delay that features a tap-tempo function which can be adjusted to a separate volume than the set tempo channel. Add to it the echo tone knob, which adjusts the filter on the repeats, and this pedal becomes one of the most handy units on the market.

[3 Essential Pedals an Electric Guitarist Needs for Every Gig]

The world of modulation is vast and can be intimidating at first. Modulation is what happens when something is changed – in classical music terminology, a modulation occurs when a piece changes key. Let's break this section into three fundamental categories of modulation devices: tremolo, chorus, and phaser.

Tremolo is what we call the effect of timed changes of volume. I can hardly imagine playing a show without a tremolo pedal. Tremolo can add depth and complexity where it's necessary, and you'll always be happy to have one around. The Nancy Sinatra classic "Bang Bang" is a perfect example of the mood that a tremolo can conjure up, and a more modern example is "Howlin' for You" by the Black Keys. Fulltone Supa-Trem: An easy-to-use, great-sounding pedal. With controls to adjust the waveform and the rate of the tremolo, as well as an onboard volume boost, this pedal is a dream. Empress Effects Tremolo: While set in a higher cost bracket, this unit truly pushes the boundaries of what a seemingly simple effect is capable of. If budget is less of a concern, this pedal gives more control over the types of tremolos produced and provides a wide array of tone-shaping possibilities.

Another classic sound, the chorus effect is created by taking the original guitar signal and slightly altering the pitch using an oscillator to create a dreamy, ethereal texture. It's a highly useful, often sought-after sound. Take a listen to Nirvana's "Come As You Are" for a strong example of chorused guitar. Daft Punk's "Get Lucky," featuring the guitar wizardry of Nile Rogers, has a relatively subtle chorus on throughout. Electro-Harmonix Small Clone: Another great-sounding, intuitive, single-knob pedal. Even though it's a one-trick pony, it's a pretty great trick. This pedal was a favorite of Kurt Cobain. Popular in funk and R&B, a phaser creates a sweep in the frequency spectrum to add filtered movement to your sound. Phasers helped shape the tone of players like Jimi Hendrix and Eddie Van Halen, and can be useful in coming up with both lead and rhythm textures that cut through a mix. Take a listen to the lead guitar on the Isley Brothers' "Who's That Lady" for an example of a heavy phase on a heavy fuzz tone. For a cleaner phase sound, Pink Floyd's "Have a Cigar" is a funky and slick example. Keeley Phaser: Another great unit from Robert Keeley, though for some reason he didn't bother to give this stompbox a name. Its ramp function is useful for switching between two different tempos, creating the possibility for a Leslie-speaker effect. MXR Phase 90: The vintage classic. Listen to the debut Van Halen album to hear this pedal working hard. ("Eruption" has a Phase 90 on for the the entire duration of the song!)

Good luck out there in pedal world! Let us know what you think of some of these units, or recommend others in the comments below!