The 3 Essential Pedals an Electric Guitarist Needs for Every Gig 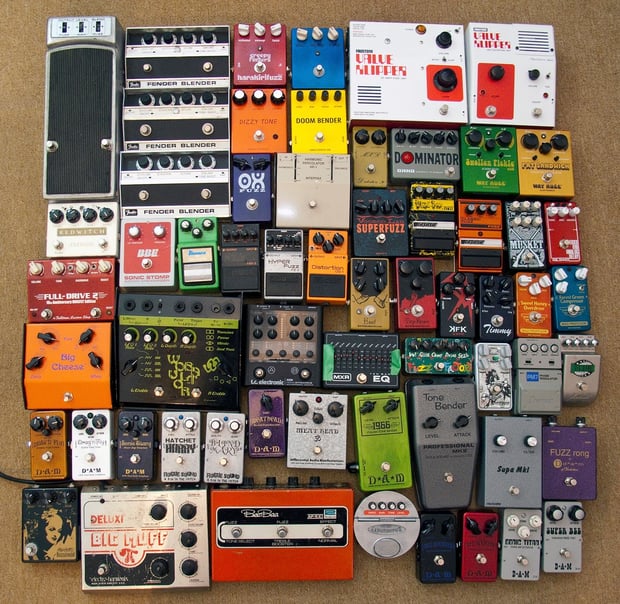 Any electric guitarist worth his or her salt needs a solid pedal lineup for gigging. The problem lies in identifying which pedals are essential and which are dead weight. If you rely on a single pedal, you risk sounding like a one-trick pony. Too many, and your audience may think you're developing a new tap-dance routine onstage.

There are three essential pedals that electric guitarists need to bring to every gig. The make and model of these pedals is dependent on your sound and style. To clarify, these are not the only pedals you need. Bring more if you use them! But these are the three that you cannot go without.

A tuning pedal is arguably the most important pedal on the list. Unfortunately, most guitars are bound to go a little flat during a long set. Few things can derail a gig as quickly as being out of tune, and your bandmates and fans aren't likely to be sympathetic, even though it's not your fault. You can only get away with blaming it on the bassist so many times. Be sure to bring a tuning pedal to every gig so that you don't have to spend too much time adjusting your strings onstage.

Even for more mellow acts, a bit of distortion during a solo can go a long way. On lighter settings, most distortion pedals can change your sound enough to help you stand out without overpowering the rest of the band. For heavier acts, the right distortion can be make or break. Be sure to choose a pedal that fits your amp and style. I mostly use tube amps, so an Ibanez Tube Screamer fits most of my needs. I also like the fuzzy sound of the Electro-Harmonix Big Muff Pi. Nothing perks up an audience quite like the extra kick from a distortion pedal, so pack one wherever you go.

This effect may get the most mileage in ethereal jam bands and from a certain Irish guitarist (first name "The"), but it's useful enough to be a must-have at every gig. While the echo sound is probably the most widely known effect from this kind of a pedal, most also allow for a variety of reverb effects. For instance, my Boss DD-3 allows for nearly perfect adjustment of the delay time and the fade of the echo. Using the right settings can be critical when playing in rooms with poor acoustics. When properly used, the effect can give an illusion that sound travels better at the venue than it really does. It can also help gloss over any mistakes you make if you're a bit rusty, in which case you should probably brush up on your technique.

Again, if your band's songs require more effects, then certainly bring more, but these are the bare minimum. Find the pedals that work best for you to make a simple but highly effective stage setup.

If you're not sure how to build a pedalboard or what to include, check out this handy guide!