Fundamentals of Guitar Anatomy: Everything You Need to Know About Strings and Cables 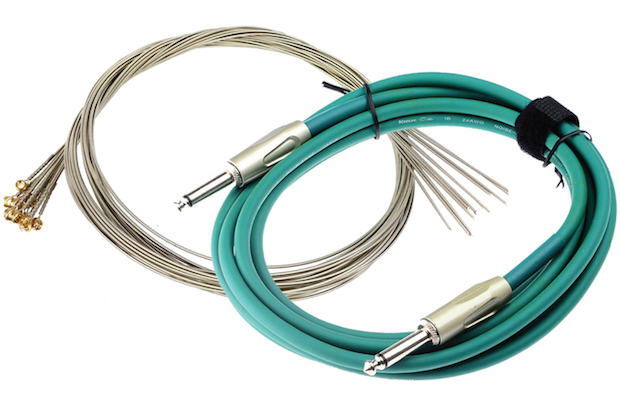 We’ve covered so many bases in this guitar breakdown series, I don’t even know if we can keep calling it baseball! But to round back to home, let’s take a look at two more important factors in the overall sound we hear from our instruments – from all the way back in the accessories department at the music store, it’s strings and cables!

We can start by breaking strings down into two categories – strings for electric guitars and acoustic guitars.

Electric guitar strings are either roundwound or flatwound. Roundwound strings are made by wrapping wire around a metal core, to a desired thickness (more on that later). The thinnest strings (the first, second, and sometimes third) are called “plain” strings, and have no wrapping around the core.

Roundwound strings sound bright and have more sparkle than their flatwound brethren, and different types of metal will continue to define the tone of the string. Most roundwound strings are wrapped with nickel-plated steel, but sometimes pure nickel is used for a slightly warmer, more vintage sounding tone. Flatwound strings are constructed in a similar fashion, with a metal wrapped around a steel core, but that’s just about where the similarities end. The winding around the core is flat, which changes the usually bumpy nature of the string to give it a smooth profile. Flatwound strings are most often associated with jazz musicians for the warm, silky tone they produce – but beware, they definitely make it harder to pull off some of the more modern bending and pyrotechnic techniques developed by modern rock guitarists. Within the acoustic guitar world, there are steel strings and nylon strings. Nylon strings are used on classical and flamenco style guitars, and can be used on vintage instruments, too. Willie Nelson’s famous guitar, Trigger, is a vintage nylon-string guitar made by Martin. Nylon strings won’t produce sound on an electric guitar because the material doesn’t interact with the magnetic field produced by the pickups (ahem… see the earlier article on guitar pickups for a refresher on that concept). But nylon strings are warm, mellow, and truly unique. Acoustic steel strings are made using the same technique as roundwound electric strings, but many companies use bronze or a blend of bronze and nickel for the punch and clarity.

The steel strings used for acoustic guitars tend to be heavier than the ones used for electric guitars. That’s because without electric amplification, the guitars rely on the sound chamber and the thickness of the string to produce the maximum amount of sound. Thicker strings will always produce broader tone.

Lighter strings are still the choice of many professional rock guitarists for their electric guitars, but acoustics will suffer from a severe loss of tone without the right string tension. As we learn and grow as guitarists, it’s worth the effort to try many different string thicknesses and materials to come into a sound that is more personal and tailored to your needs and desires.

Author's note: for an incredible display of acoustic guitar colors and capabilities, look no further than the album Friday Night in San Francisco by the great guitarists Al di Meola, Paco de Lucia, and John McLaughlin.

Instrument cables are a necessary evil for electric guitarists. Let’s quickly talk about how they work.

Remember in a previous episode when we talked about guitar pickups? As we discussed back then, the magnetic pieces in the pickups interact with the metal strings to create electrical pulses, which in turn become the sound we hear out of the amplifier. The cable is responsible for transporting that current from the guitar to the amp.

Most instrument cables for sale at major retailers are fine. The reality is that the most important factor in a cable, other than its durability, is how well it has been put together in the factory. There are contact points between the wire and the cable tips that need to be fully maximized in order to achieve full tonal potential.

You may now be asking yourself: Why do some cables boast better sound than others? Aren’t they all the same?

Consider a garden hose. A hose is a hollow path for all the water sent from the source to travel unobstructed through the length of the pipe to be released out of the open end. Cables work the same way, providing a length of wire for the electric signal of our instruments to be amplified. But most factory-made cables simply don’t live up to that ideal, and we’re often settling for congestion in our hoses, which means loss of tone. When the hose is obstructed, we get less water. When cables aren’t constructed to give their maximum output, we lose tone. It’s as simple as that.

For those who have ever had the misfortune of accidentally buying or using a speaker cable when they meant to use an instrument cable or vice versa, you know this lesson already — there’s a reason why they each have designated functions. Instrument cables are constructed for signals sent from pickups, which tend to be much less powerful than the signals that are sent from amplifiers to speakers.

A guitarist plugging into an amp with a speaker cable will tend to get a lot of extraneous noise, and amplifiers wired up with instrument cables aren’t being given the proper signal flow, which can result in distorted sound and even electrical shortages, which can blow out an amp. For some more detail on the difference in construction between the two types of cables, head over to Styles Music for a quick lesson in that department!

Before you go ahead and spring for high-end Mogami or George L’s cables, know that the difference is subtle, and can take your ears some time to even notice the difference in what you’re hearing. For many guitar players, what they hear coming from their amp using a $10 cable is absolutely fine – and that’s okay. But for those on the eternal quest for perfect tone, trying a high-quality cable for the first time is a revealing and gratifying moment, one that a true audiophile is sure never to forget.

So that’s our guitar anatomy breakdown series! Hope you’ve had as much fun learning about this stuff as I have babbling about it. As always, I’m speaking from my experience as a career guitar nerd, gear junkie, curious human, and performing artist. My opinions are just that – opinions.

Except for the science-y stuff, which I had to dumb down for my own brain to comprehend, it’s entirely possible that a guitarist may experience the polar opposite of how I feel about the way pickups sound or body styles work for their taste – and that’s a good thing! We don’t grow as artists unless we question everything, and some of those questions should be: “What is this sound?” “Do I like this sound?” “If I change this, what does that do to my sound?”… and so forth.

Bon voyage, fellow stringers, and good luck creating a tone all your own.

Check out the full Fundamentals of Guitar Anatomy series here. Did we miss your favorite type of string or cable? Let us know in the comments below!

You may also like: The Quick and Dirty Guide to Cables for Musicians

Elyadeen Anbar is a guitarist, writer and educator residing in Los Angeles, CA. He has had the pleasure of contributing music and production to some of his favorite artists, and graced stages the world over. His work can be found at elyadeenanbar.com, soundcloud.com/mrs-walrus, and selfesteemmusic.tumblr.com.