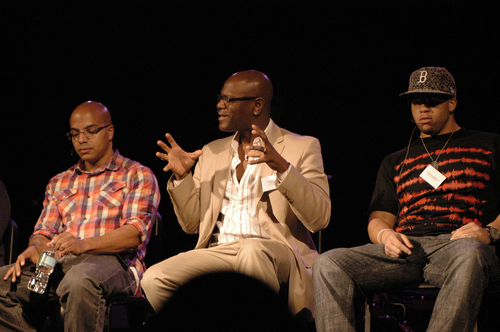 In 1979, I hated “Rapper’s Delight.” You could have shut down hip-hop right there for me and called that a novelty record. How dare they steal Nile Rodgers’ hard-earned intellectual property! Besides, I had just put out my first single and that record was taking up my airtime at local radio.

In 1996, while working as the mixing engineer on The Notorious B.I.G.’s second album, he wrote a song on the spot called “You’re Nobody (Til Somebody Kills You).” I asked him why he would want to put that thought into the universe, and he answered, “Because that is how it is right now, out here, in these streets.” And then he was gone…

You see, I had hated hip-hop for so long that I no longer had the energy to hate it anymore. And I feared hip-hop so much that I chose to face it instead of fleeing from it. And what I learned was that my hate was a byproduct of jealousy and my fear was a byproduct of ignorance.

It is not music that is the problem in the music business; it is the message and the messengers.

If you do not speak to this generation in a language they can understand, then people who are uninformed will gladly continue defining music culture for years to come.

Black music in America sounds the way it does because musicians are not at the table trying to make 21st century music. Musicians are spending their time complaining about why their 20th century “thing” is not being received well.

The language of your craft has gone way beyond your instrument. How much of it do you know? Are we clear that musicians are like doctors that speak medicine, and the rest of the population is like doctors’ patients that need be spoken to in layman’s terms?

I am not condoning any immature rapper’s lyrics. I am putting out a call to all musicians to stop hating and get busy creating music that speaks to this generation and the 21st century. If you do not speak to the people of this generation in a language they can understand, then people who are uninformed will gladly continue defining music culture, and the culture of your neighborhoods, for years to come.

I’m asking every musician to modernize their creativity, to up their technology, to increase their entrepreneurial net worth. Before we can get the hearts and minds of the audiences that are listening to the destructive messages in today’s music, we must first conquer the music itself. Listen, absorb, understand, contextualize… then create.

Prince Charles Alexander is a Grammy Award-winning musician, recording artist, record producer, audio engineer, and educator. He is a professor in the Music Production and Engineering Department at Berklee College of Music in Boston, Massachusetts.