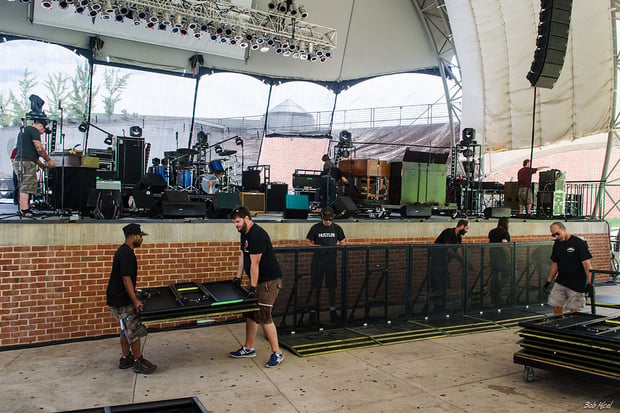 Did you ever stop to consider how much your band’s gear weighs? How about your drum set? Each cymbal on a stand is probably good for 40 pounds. Then, think about combo amps. A guitar amp with a single 12-inch speaker might weigh 35 pounds, but chances are you have amps with two, three, or even four speakers in them.

Too often, a band’s load-out occurs under duress while another act takes the stage. It’s an experience known for back strains, hand injuries, and pieces of gear taking chunks out of door frames as you struggle to get through narrow spaces carrying heavy things.

Taking time out of your life to think about loading gear may not be at the top of your to-do list, but finding ways to do this more efficiently, quickly, and ergonomically will improve your experience playing shows. It’ll also reduce the risk of gear heists, injuries, and damage to your equipment. Here’s a rundown of some of the best strategies to make your load-out go more smoothly.

The drum set usually takes more time to move than all the other gear put together. First, it has to be broken down, a step that bands in a hurry tend to skip (don’t pretend you haven’t thrown a cymbal stand in a car with the cymbal still attached). You have the bulky drums themselves, a bunch of heavy cymbals that can be dropped and cracked, and then a huge pile of heavy metal stands that don’t nest.

There has to be an easier way... and there is.

First off, it’s key to remove all cymbals from stands, including the hi-hat. If you're going to spend a lot of money on any gear-storage item, a cymbal bag (like this one from Zildjian) should be the one. If not, you can use a canvas shoulder bag, like a beach bag.

Inside, nest the cymbals, with each one inside a dollar-store pillowcase. Packed this way, one of your roadies could walk over the stack and they’d probably still be fine. Where they should not be is lying loose on top of other sharp, angular items… like cymbal stands.

When you’ve broken down your drum set, you have a stack of stands that are all about the same length. They should be easy to move, but they’re not. They slip, they slide, they trap your fingers between them, and one always seems to fall out on the floor.

You can take two men's leather belts (preferably from the Big and Tall sections) and buckle each end of the bundle together. Then, you can carry the whole thing with your hands under it like a bundle of firewood. It’ll still be heavy, but it won’t shift and you won’t get your fingers pinched. It’ll also travel better without the stands sliding all over when you take a sharp turn.

These shoulder-busters are heavy, awkward, bulky, or all of the above. If you're lucky, the bigger cabs have a handle on each side, so you can use both arms. But the combo amps usually just have a single strap handle on top... and it usually can't handle the weight of the amp for very long without fraying and breaking.

You can ease this process by making your rigs roll.

All amps are basically plywood boxes. It’s totally okay to screw things into them. Plenty of people attach caster wheels (found at any hardware store) to the bottoms of their amps so they can wheel them in and out of live venues. They have the right idea, but the execution is wrong. These wheels should be attached to the side of the amp so you can tip it up and then push it along. This way, the amp becomes much taller, so you don’t have to ruin your lower back stooping to push it.

You can’t really have your amp rolling around the stage, can you? When you get to your spot on the stage, just tip the amp down and plug in. In the case of a very tall one-piece cabinet, the long side will be down, and you'll have to stoop a bit – but at least the thing won’t tip over, crushing two of your fans as they wait for your bass player’s autograph.

Another principle you might want to consider is that larger no longer equals louder. Anyone who’s ever stood next to a tiny Mesa/Boogie single-12 knows this.

Think about bulk when buying your gear. If you play doom metal, you may need eight 12-inch speakers for your guitars and another eight in your bass cabinet, but most bands don’t.

The beauty of the hand truck

An alternative for moving amps is a heavy-duty hand truck like this one, a useful item that should live in anyone’s garage. The better ones can even get your amp up three or four stairs.

So your singer has a favorite vocal mic? Does your drummer insist on that mic for the kick drum and look with disdain at whatever the club’s sound guy is bringing over?

You don’t want to advertise the fact that you bring your own mics. Don’t put them in a nice black, zippered bag that says “microphone case” on it. That just makes them easier to steal! Microphones should be hidden inside the cases of other items that are harder to pick up and easier for you to keep track of.

Every band has a few friends who would love to travel with them. Why not press one of those people into service and formalize the roadie arrangement? Even if you’re not making enough to pay the person, you have a lot to offer: travel to cool places, free shows (by your band and whoever is on the bill with you), and a resume item if they’re interested in working in the music business.

These people can take money at the door (if the venue doesn’t already have such a person), sell merchandise, and perform a security role, keeping an eye on your equipment and any weirdos in the audience while you focus on performing. And after you’ve left it all on the floor during your show, it’s awesome to have somebody waiting to help break it down.