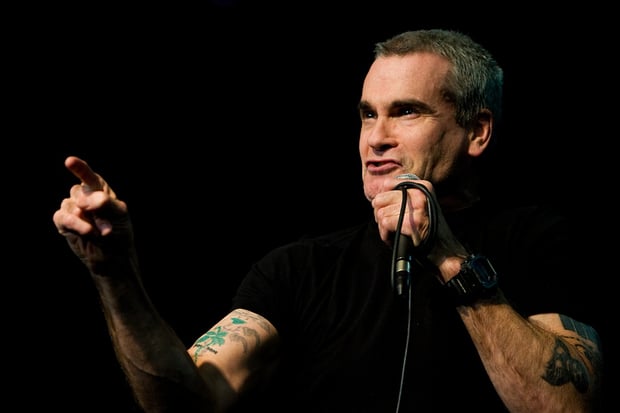 Photo by Mat Hayward via Shutterstock

The career of musician, author, and actor Henry Rollins is well into its fourth decade. The uncompromising artist has found himself bloodied by his own fans while fronting hardcore act Black Flag, beaten up by Robert DeNiro in the gangster epic Heat, suffering from a low self-opinion on his own solo album, and touring Iraq with the USO.

In his lyrics, his books, and his later career as a radio and TV host, Rollins has been one of the most succinct and unflinching social critics around – as well as a fountain of advice and encouragement for young artists, without sugarcoating the realities of making it in the business. He’s also one of the most quotable public figures since Winston Churchill. Here are a few nuggets of wisdom from Rollins that apply to anybody trying to make it in the arts.

1. "If you hate your parents, the man, or the establishment, don't show them up by getting wasted and wrapping your car around a tree. If you really want to rebel against your parents, out-learn them, out-live them, and know more than they do."

This quote really sums up the rage of punk rock and the reality of pushing the envelope as an artist. Sure, it’s better not to have to hate anybody, but if others hate you, then living (and playing) well is the best revenge.

2. "When you start to doubt yourself, the real world will eat you alive."

What musician hasn’t been lectured about the “real world”? Usually, well-meaning advice-givers are imagining a nine-to-five world of doughnut breaks, water-cooler gossip, and backstabbing for promotions. Well, that world isn’t the only one that’s real, but it’ll be happy to welcome you if you quit music. Stick with your dream, and don’t end up in what Youth of Today called “the monotonous life of the working class.”

One of Rollins' simplest and most profound statements… and a perfect summary of a man whose first act when planning a tour is to figure out his new weightlifting regimen. Pain is part of the artistic process, whether it’s the pain of rejection or the physical pain of practicing until you’re sore.

4. "Learning about what you’re made of is always time well spent."

What better form of introspection than playing and writing music? You can’t help but learn about yourself, and going through the drudgery of booking shows, long hours on lonely highways, and sleeping on strange couches will surely show you what you’re made of.

5. "You can still function as a living ruin."

What Rollins is putting in poetic terms here could be read in several ways: no matter what bad things happen to you, keep going. Or, use your damage to make good art. Everybody can relate to pain.

It’s okay to walk away. You don’t have to tackle every project that comes your way. But if it’s a yes, give it all you’ve got. And as a certain Jedi master noted, there is no try. Do or do not.

This quote, which would be the first line of a badass haiku, reminds us that sometimes when things go wrong, the only way to make them right is to jump right back in where you left off.

8. "Knowledge without mileage is bullshit."

There's no substitute for life experience... and there's no excuse for acting like a know-it-all if you can't back it up. Be open-minded and willing to change based on all you learn.

If I lose my amp, I will play unplugged. If I lose my guitar, I’ll sing. If I lose my voice, I’ll tap beats with the palms of my hands. I’ll keep playing, for myself, for anyone who wants to listen, and for anybody who might hear me and decide they want to play, too.