How to Avoid the 5 Most Common Band Rehearsal Mistakes 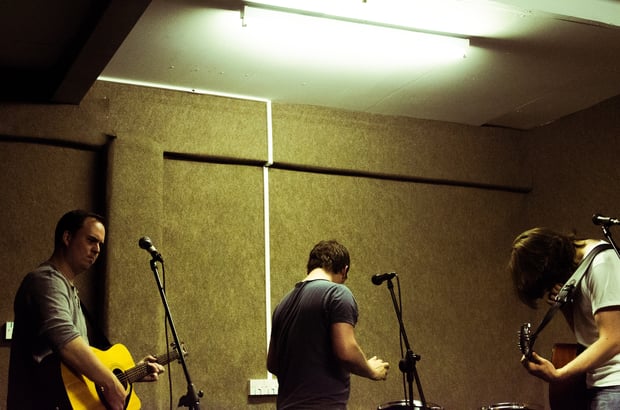 Have you ever had a discouraging rehearsal? It's rough! When you rehearse with the group you play in, everyone there has taken time out of their day to put their energy into this musical project in an effort to progress, build creative momentum, and sound better. That's what you all should be striving for. On the other hand, if you don't do things the right way, you can end up with a rehearsal that's not only a waste of time, but is discouraging to everyone involved. Follow these steps and never have an unproductive rehearsal again.

1. Make sure all your gear works before rehearsal starts

There's an old saying that our identities are not formed from all the things we think, but instead, only from the parts of ourselves that we reveal to other people. You could be a royal mess with pedals that don't work, dead batteries, noisy input jacks, everything! However, as long as you get it all taken care of before you step into a scheduled rehearsal, you're all good.

Test your gear out when you practice, and if you're a serious musician, make it a priority to get it fixed. If you're still in the early stages of your music career or you're short on cash, that's fine, too – just make some sort of arrangement to get working gear. Whatever you do, don't let this problem fester until rehearsal where you'll be wasting everyone's time. It's unprofessional and straight up rude. Show up with working gear every time, and you won't have to worry about being "that guy" at the rehearsal.

In the world of institutionalized music: "Early is on time, on time is late, and late is unacceptable." Now before all the mathematicians and philosophers go connecting the dots to disprove this innocent maxim, it simply means that showing up early to a rehearsal and getting appropriately prepared before the scheduled downbeat is considered standard. If you walk in the door when music is supposed to start, you're considered late, because you need to get your music out, get your instrument ready, and prepare to play. Finally, if you're full-blown late to rehearsal, you might not be coming back to too many more.

You get good at what you practice, so if you don't correct mistakes swiftly, they can become embedded into your playing and be harder to shake. If you know you're struggling with a part, it's obviously a good idea to go home and practice it, but there are circumstances where the problem exists in the union of the different instruments. There's no tool quite like the act of relentlessly looping a problem area in a song. Start with just the problem instruments, getting right to the root of the issue to zero in on what's wrong. Once the issue is fixed, add in the rest of the band members, work it back into the song, and you're all set.

Remember to keep an eye on that problem part even after it's fixed as well; don't get lazy! If a spot was difficult enough to give you problems in the first place, it could likely creep up again. Loop your problem areas and don't let a single thing slip by.

4. Be hypercritical of tempo, volume, and dynamics

Sometimes, the part of a song that needs work isn't as blatant as a mistake. If you want your band to sound tight, you need to be hypercritical of the tempo, volume, and dynamics in your songs. The most foolproof way to check your tempo is to set an electronic metronome to your desired tempo, turn it off, start playing the song, and stop suddenly in the middle of the song and compare the tempo you were playing to the tempo programmed in the metronome. This will tell you whether you need to slow down, speed up, or adjust your standards for what sounds best in the song.

Volume and dynamics don't have a magic box to keep you on point, but use your ears and you'll get a good sense of what needs to come up and down. Use control, listen to everyone else, and keep all your sounds tight.

5. Save personal issues for after rehearsal

No one wants to hear you and your frenemy get into it in the middle of a rehearsal. It's so ridiculous, it almost seems crazy to mention, but this issue bears repeating as I'm sure all too many of you have experienced this tragic phenomenon firsthand. A creative and open space like a DIY band can be a hotbed for feelings to come to the surface, but an agreement must be reached to be respectful of band members' time. Keep things professional when everyone is taking time out of their day to make a project happen. That being said, cultivate respectful relationships with your band and you won't have anything to hide in the first place. Keep the interactions professional, and keep your rehearsals running at peak efficiency.

Next up: 8 Simple Ways to Make Your Band Rehearsal More Productive