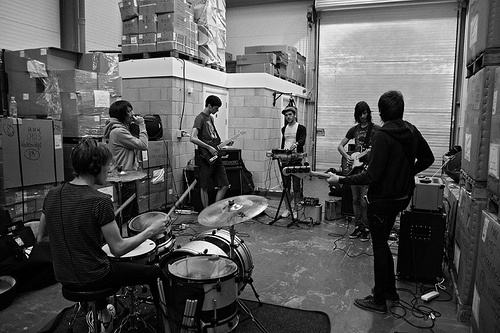 Band rehearsal is one of the most integral components of your band's success. It's where you're able to bounce ideas off of each other and write new music, where you get your songs in tip-top shape to perform, and it's where you grow together – not just as musicians, but also as friends. We all know how important it is that your band is consistently practicing, but it's even more important to make sure your rehearsal time is as productive as possible. Sure, a jam session and shuffling through a few songs is a practice session, but could your band be more efficient with its time? Here are eight easy tweaks to make your band rehearsal more productive.

This is a common way to eat up valuable practice time and distract focus. We're all guilty of checking our phones between songs, and sometimes even peeking at our phones during a song! Put away your phones until you have a full break. Even if you're checking your phone while your guitarist is changing guitars, it distracts your focus. Concentrate on practice. Unless you're waiting on an extremely important email from your manager or something band-related, keep your phone on silent.

This is a simple way to be more productive and stay focused. While getting together to jam or go over old songs is a natural way to rehearse, ask yourself if that's going to really be effective in helping you accomplish your goals. Do you have an upcoming show? What's on the setlist? What songs do you need to have rehearsed? Or maybe you're looking to write new material and get into the studio. Know what the point of the practice is beforehand so that you have a clear checklist of what it is you're working on.

Google Calendar is a great tool for scheduling practice. Use your band email that everyone has access to and input practice times. Once you have your allotted times mapped out, create a schedule for each individual rehearsal as well. For the first half, maybe practice old songs for an upcoming show. The second half, work on new material. Having everything planned out will keep you on track and maximize your productivity.

While in some cases it's good to push yourself, we know how draining long rehearsals can be – not just for your mind, but your ears, fingers, voice, etc. Schedule a break in your practice. Even if it's only five minutes, it's healthy to sit down for a moment and let yourself relax. With band rehearsals, we often hack at the same song a million times. Taking a break can actually clear your mind for a bit and give you a better take rather than playing it a few more times. Don't go overboard.

Most bands have a frontman or frontwoman, which is typically the singer. During rehearsal, though, there's often a leader who guides the practice, which may not be the frontperson on stage. If one member of your band is hardly speaking, that's not always a good sign. Make sure everyone is communicating their opinions on songs and the direction of the rehearsal. This will save time down the road when one person speaks up finally about not having their voice heard or feeling like the direction of the song has been wrong for months. Open communication creates a more productive atmosphere that everyone is happy to be a part of.

This should be obvious, but musicians and artist-types are notorious for running late. Even if it means saying practice is at 6:15 p.m. to make sure you really start at 6:30 p.m., make sure the time is clear and everyone is ready to play at the same time. If one person is running late, sure, you can get started, but it's already not as productive as it could be. Be clear about expectations for timeliness. If you have one member who's constantly late, either let him or her know it's affecting practice productivity or readjust the practice time slightly to fit that person's schedule.

It's tempting to have your friends come watch your band practice. Rehearsal is (and should be) fun. It's about getting your music sharper, but it's also about the companionship and joy of playing music with friends. So, it's natural to bring along your girlfriend/boyfriend or a few of your friends who frequent your shows. However, once a few guests turn up, it becomes more of a hangout session than a practice. Even if your guests aren't interacting with you, their presence may make some members a little more hesitant to be communicative or make mistakes. Practice is essential for making mistakes, talking openly about the music, and being honest with your band members. If a guest is in the room, you may feel a subconscious need to perform for them, rather than try something new that you know you'll fumble through the first few tries.

8. Schedule rehearsal for when you can all be mentally focused

Practice at the most convenient time that everyone can get together so no one is coming to practice drained, tired, or out of it. If you're getting together after a long work day, it'll be harder to be productive since everyone is mentally clocked out. We know that you have to work with the free time you have, but ask yourself when the best time for the band to get together is. Maybe you're more productive practicing before work in the morning. If everyone works nights, practice in the late morning. Find the most ideal time where everyone is focused and ready to work. (But if you can only practice late at night after a long day, we understand – it's tough balancing a day job with music.)

Now, use this easy-to-follow guide to establish your band rehearsal layout and determine each members' responsibilities!