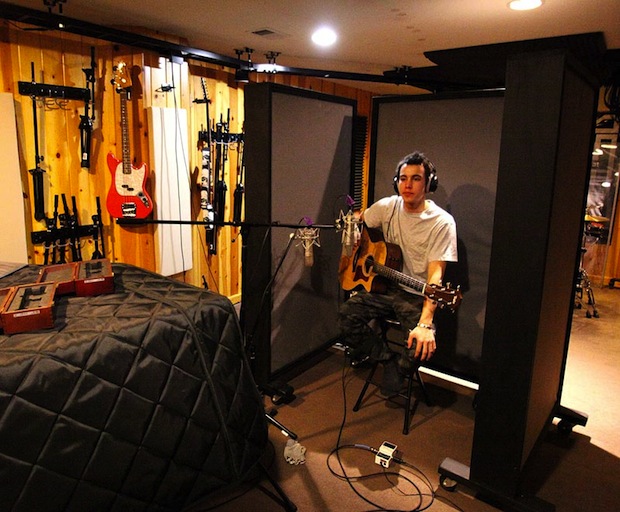 So you've just been hired for a recording gig with your favorite artist, and you're stoked. Congratulations! If you're new to the scene, you may want to consider some of the following tips to ensure you get called back for future jobs. You want to leave a positive, memorable impression on any producers, writers, or engineers contracted for the project, keeping in mind the potential to be added to their coveted databases of must-use session players.

Know your parts, and if possible, learn the parts of fellow players. While this may seem incredibly obvious, it's crucial that you understand the importance of flawless performances. No one is perfect, but if you miss a sharp or play on a rest, you'll quickly lose the respect of everyone around you. A studio recording is a performance – one that's captured and saved. Even if the engineer says you're not being recorded, chances are, you're still being recorded.

It's also helpful to be aware of the arrangement and surrounding instrumentation, because you never know when a producer might ask you to mirror someone's part, double up on a harmony, or provide a countermelody to an existing line. Having the ability to play by ear and sight-read is extremely useful in this environment, so if your skills in those areas aren't up to par, you may want to invest in honing your craft.

[5 Tips for Learning Any New Instrument]

The best guess if you're unsure is the producer, but if there's no producer present, know that there may not always be an appointed bandleader. In certain situations, the decision maker might be a music director, engineer, label representative, or band member other than the lead singer. Don't be afraid to ask beforehand. You don't want to get yourself into a situation where you're deferring to someone who isn't in charge of the session to give you direction or misinformation. Successful sessions are all about establishing effective means of communication, and you want to do your part to ensure this process runs smoothly.

3. Remember that this is a job

This means phones off (silent mode doesn't count because the vibrations can be a distraction). Unless otherwise specified, assume that it's frowned upon to have your phone out for any reason, even if it's just to take a quick selfie behind the mic. Never take photos or videos of artists without their permission; it can lead to very uncomfortable conversations that can cost you the next job.

You may have a significant other or friends who want to see you shine. However, it's extremely unprofessional to extend invitations to anyone without checking in with the artist or producer. If you do want to have guests, wait until the lunch or dinner break to see them, as any unexpected addition can alter the dynamic of the room.

Try and anticipate in advance what's going to be asked of you. Listen carefully to every critique and suggestion given, even if it's not directly aimed at you. Producers and directors often have unique styles and sounds they listen for, so being able to clue yourself in to the particular needs of the session is key.

Always stay present and attentive, including listening to those around you. If you weren't listening to every part during the last take, and you're asked to mimic the drummer or follow the guitarist, you'll quickly find yourself in an awkward position that can compromise your reputation.

Never underestimate the power of saying thank you to every person involved in a session. Acknowledging everyone, regardless of their position or contribution (including runners who bring you water), sends a powerful message of humility that carries significant weight in an industry where perception is reality, and reality becomes reputation. There are a lot of fantastic players out there, so likeability is a must!

7. Save it for later

If there's creative dialogue between the artist, songwriter, producer, or engineer, make sure that your contributions are warranted before you offer them. Only give input if you've established with the person in charge that it's an open environment where musical ideas are welcomed. Otherwise, it's best to keep quiet because this isn't your record; it's the baby of someone else's mind. Understand that, in more instances than not, session musicians are hired for their reliable performances, not because of their creative genius. Your best input is your craft.

If you’re working on multiple projects or recording for other bands, don't mention them in the session. As a musician, it's important to compartmentalize projects, taking into consideration that each one is a unique culmination of passion, dedication, energy, and skill. Don't kill the mood by discussing outside material that's unrelated to the current songs you're working on. This includes any references that may come to mind during the recording process. It's embarrassing and defeating to make a comparison to another artist or album that the producer or band might secretly hate.

9. Never move any live room equipment on your own

This will unquestionably lead to frustration, especially with engineers and their assistants. You may have a working knowledge of polar patterns, but this isn't the time to boast your expertise. Harmlessly moving an empty guitar case out of the way or changing the angle of a mic can send a terrible message that you're inconsiderate to any bystanders you might not think are watching. Remember that every move you make, even the non-musical ones, are formalizing an overall impression, which becomes your reputation.

It's typical to take breaks, be invited in the control room to listen back to what's been recorded, and have brief moments of casual conversation during sessions. Maintain your professionalism throughout each stage of this process. Even though you may be out of the sometimes-tense live room, it doesn't mean you can put your guard down and be out of the moment. Always be present, responsive, and positive. Be aware that any gestures, facial expressions, posture, and other forms of non-verbal communication can send powerful messages to those around you.