How to Find the Perfect Band Name 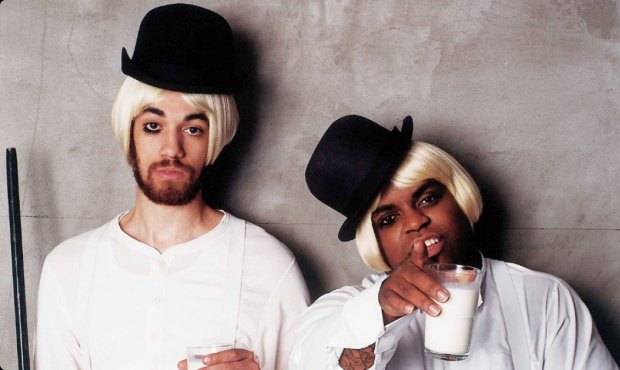 You, too, can be as ingenious as Gnarls Barkley. (Image via stereogum.com)

Let’s face it: being a musician can be tough. You have to write music, find the right people to play with, get yourself heard, craft a professional sound, record some tracks, etc., etc., etc. And yet, the challenge that I hear cited most frequently by aspiring musicians is how hard it is to come up with a band name. The music side is easy. But coming up with a novel name that captures your unique take on '80s fringe crooner metal? For some reason, that seems to be impossible. But even though deciding between the Red Scare or Camouflage! may seem like a silly thing to get hung up on, the truth is that it's often the very first step you're taking in sharing your art with the world. And that can be a really scary thing. Being a musician takes a lot of courage – offering up your creative output for judgment and then standing by it – and it starts with choosing a single, simple, memorable moniker that people will know you by.

What follows is a list to help aspiring artists come up with the perfect band name, whether you're hoping to be the next U2 or more of a Death from Above 1979.

This is the most common approach we encounter today, especially for indie bands. Basically, you take a noun, something simple like faun or photograph or book, make it plural, and put a "the" in front of it. The Fauns, the Photographs, or the Books all make perfectly acceptable names, especially for cute four-person indie bands writing three-to-five-minute songs.

If you want to take that approach one step further, simply add a descriptor before your noun. This will allow you to break outside the box a little bit but without getting into crazy, sentence-long-band-name territory. Let's face it, the Dirty Projectors just wouldn't be quite as interesting if they were just named the Projectors. Other examples: the Lovely Feathers, the Flaming Lips, the Ultramagnetic MCs, and the Sappy Songbirds (okay, that last one is made up – free gift). If you're overwhelmed with options, try giving yourself a constraint: the combinations have to be surprising, alliterative, or written in Shakespearean iambs!

When I was a kid, there was this game we'd play that you could find the perfect stripper name by combining your first pet's name with the name of the street you lived on. I don't know why we wanted stripper names, but this did actually unearth some pretty good names. I would be Cleo Bond, which I could both imagine on the marquis at a burlesque show or as the name of the hippest new indie act playing the Music Hall of Williamsburg. My bandmate Jeremy would be in Napoleon Hickory.

These are always my favorite to think up, even if they don't usually work out. A band name like Foxygen is a great example of really effective wordplay. Or Socktopus. Some people do this with celebrities' names, such as Gnarls Barkley or Gringo Star, though if you go this route, please avoid doing something creepy like Bono Must Die. Celebrities are people, too.

A spoonerism is what happens when you take two words and switch the first letters, like "step carefully" would become "cep starefully" or "king richard" would become "ring kichard." Com Truise is probably the most successful example I can think of off the top of my head.

In fact, it seems like pretty much any game that helps you think of word combinations could inspire the next brilliant band name. Here are a few other quick suggestions:

At the end of the day, pretty much anything can be made into a band name. In fact, the only approach we'd suggest avoiding is doing whatever everyone else is doing. A few years ago, everyone seemed to have the same band names: either "wolf" (Wolf Parade, We are Wolves, AIDS Wolf, Peanut Butter Wolf, etc.) or "crystal" (Crystal Castles, Crystal Sculls, Crystal Fighters, etc.). These days, I'd probably avoid the celebrity name thing, as I'm hearing a lot of that, but it's up to you to judge.

My final piece of advice? Just pick something. At the end of the day, whatever name you select is going to take on whatever meaning you give it over time. So rather than sitting around all day debating it, just choose whatever you can agree on today and start playing shows. Believe me: the hard part is everything after the band name!

Before you settle on a band name, make sure you consider how it might affect your future licensing opportunities!

Ian Temple is a pianist, entrepreneur, and professional musician. He started Soundfly to help people really find what gets them most excited musically and pursue it. He's toured all over the world with his experimental trio, Sontag Shogun. Check out his most recent course, Building Blocks of Piano, or follow him on Twitter @ianrtemple.