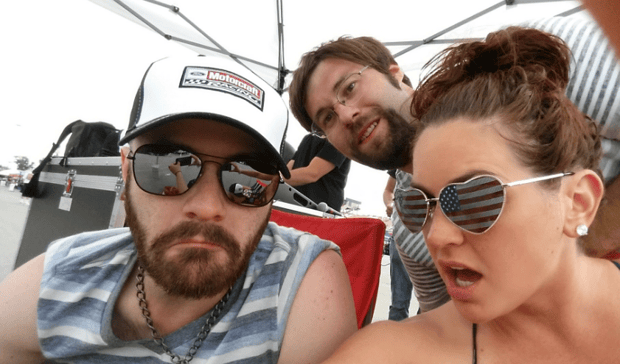 As fun as it may seem, touring can be a grind and it’s hard on your physical and emotional health. I mean, don’t get me wrong – it’s fun. But it’s also weird and not very glamorous.

Touring has given me the strangest and most challenging experiences of my life (so far). From being flown down to LA for a weird, weird birthday party, to losing the only key to the van at the base of a mountain with no one around, I would never have had these experiences if it weren’t for the band.

It’s both a blessing and a curse that you're forced share these experiences with bandmates. Sometimes, all you want is a little space. Sometimes, a little silence. Sadly, these things are in short supply when you’re on the road. On the other hand, sometimes you need someone to talk to about how weird everything is.

In our second year of being a touring band, we played 130+ shows and were on the road traveling for many more days. We’ve remained best friends and learned some valuable lessons about how to get along on the road.

People often ask if we ever get sick of each other. And honestly, we don’t. Here’s how.

1. Approach challenges with a sense of humor

Over the past few years, each of us has made some incredibly dumb mistakes. For example, as I mentioned above, I lost the only set of keys to the van while snowboarding on a mountain. Not only were we unable to go anywhere, but we couldn’t even get our gear in the van. Stuck at the base of a mountain with no one around. Not my best moment.

There are just too many of these situations to deal with when you’re in a band. If everyone got super stressed out and grumpy every time something ridiculous happened, we would be a very grumpy group of individuals. Thankfully, we all have a very healthy (sometimes too healthy) sense of humor. This has gotten us through countless stressful situations.

Sometimes, you just have to make a joke, find a hot tub, and let the situation work itself out.

2. Approach each other’s strengths and weaknesses with understanding

Everyone has a "thing." That thing that’s super annoying. That they do all the time. I think mine is absentmindedness. I forget things… a lot. This is a weakness of mine, and something I’m working on. And while the other guys aren’t quite as bad, we’ve all forgotten things, big and small, at various points in our career.

No one gets upset or irritable when something is forgotten. It’s not productive, and it doesn’t help anyone. Instead, we figure it out. Together.

If you’re getting annoyed because a bandmate has done that "thing" again, remember that you also have a "thing." Realize this, and try to approach the situation with a light, compassionate touch. The band’s relationship is far more important than the bass player’s smelly feet. (But seriously, dude, get some insoles or something.)

3. Sometimes, you don’t need to talk about stuff

There comes a point in our touring schedule (usually right about now, in fact) that we literally run out of things to talk about. We made a 16-hour trek to a festival in the Kootenays last weekend and barely talked the entire way.

It may sound strange, but if you’ve ever done a long tour, you’ll know what I’m talking about. Each band member has something they like to do in the van. I like to write these articles or drive. Dylan likes to play Grand Theft Auto (or similar) on his phone. Roman sleeps a lot (I’m jealous of this ability).

It can be nice to just leave each other alone and do those things. This generally keeps us all happy, and then when we don’t see each other for two or three days, we can talk for four hours straight!

[Top 10 Qualities to Look For in a Tourmate]

4. Develop your own personal routines that give you space

Routines are important, and it’s hard to maintain even simple routines (e.g., brushing your teeth) while on tour. However, when I manage to get out and run every day or two, I am a much happier person. Similarly, a solo walk and phone call with the significant other, a morning bodyweight workout, a quiet work session, or whatever you prefer are super important for maintaining a healthy relationship.

Everyone needs to be alone sometimes. Respect that.

I’m not talking “let’s go get mimosas and pay $25 for french toast” sorta brunch. I’m talking “let’s save money and eat breakfast and lunch at the same time” sorta brunch. But still. We find great satisfaction on eating a somewhat healthy breakfast/lunch, reflecting on last night’s gig, planning the day, and chatting.

We usually try to find the hippest (or cheapest) local breakfast spot with the best bottomless coffee. Then, we hit the road again.

6. Take the "highs" and hold on to them for dear life

Things are getting better now, but there were a lot more lows than highs when we were starting out. Now, our tours are a lot more fun.

However, we’re starting fresh in some brand new markets and experiencing some of those same lows, like poor attendance and terrible accommodations, all over again. The difference is, we know how to deal with that now.

Every musician knows that the good shows outweigh the bad ones. For us, that’s what keeps us touring. We love touring, and we love playing. We love when a gig goes "just so." We also love seeing beautiful scenery, meeting beautiful people, and the wonderful hospitality of so many venues and fans.

Seriously, as weird and challenging as it can be, touring is the best job ever. A grateful attitude and an optimistic worldview will change the way you tour.

Do you have any tips for getting along on the road? I have another long drive coming up next week, so let me know in the comments if you have some advice!