Top 10 Qualities to Look for in a Tourmate 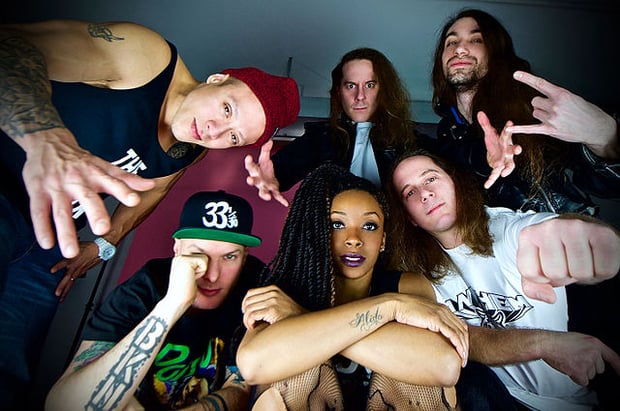 According to Shinobi Ninja, you learn a lot about your friends when you go on tour with them. (Image via Wikimedia Commons; used under Creative Commons)

"Being on tour a big fat gift," extols C Bock of the rock band Revolt Revolt. "[It’s] one of the best parts of being a musician – a ticket to see the world in a way not many others get to. Every day is a new day, and you never know exactly what you are going to get. Other than the band, your songs, and the wheels beneath you, everything is new, coming at you full speed."

Touring is clearly a heck of an experience, but what kind of person do you want by your side for those long trips around the country – or the world? I asked half a dozen artists about this, and they replied with the following 10 qualities they look for in a tourmate.

If a band is on the road with you, their mind should be on the task at hand. "You don’t want to be on tour, and you're out their killing yourself for this music, and you have someone next to you whose head is somewhere else completely," explains Doobie Duke Sims of the hip-rock-soul band Shinobi Ninja. "It's like being in a foxhole, in a way, and you got all your guns out, and they're shooting at you, and the person next to you is playing video games."

A plethora of negative things can happen while on the road. Your GPS can crap out, leaving you lost in a random part of the country. Your van can break down. You can have venues not promote shows correctly (or at all). You can have payment issues. With all of those possibilities in the air, it’s important that the people you’re with don’t turn your entire tour into a pity party.

According to C Bock of Revolt Revolt, "The main thing on tour is to know when shit hits the fan, you gotta roll with it. Positive attitude goes a long way.... I can tell if someone is upbeat and lighthearted that things are going to go well. No one likes being packed like sardines with someone that is a continual drag."

Not only does a negative outlook have the ability to drag everybody on the tour down, as Alex Neuhausen, bassist and producer for Lilly Wolf, has seen, that negativity can end up having quite the widespread effect. "We toured with this band who were fun people most of the time, but whenever something went a little wrong, they couldn't handle it," he remembers. "We played a house party, and there was no monitor, so they threatened to not play. Finally they played, but the singer kept complaining about the sound between songs. At another show, the booker gave the touring bands shorter sets, and instead of being cool or trying to politely negotiate a longer set, they went over time, and pissed off the club and the bands who were after them."

3. The right kind of friendship

Touring with friends sounds like a great idea, but don’t just tour with any friends – tour with the right friends.

"Think about why you're friends with the people you go on tour with," Neuhausen advises. "If it's just because you party together, or they're a great musician, that's awesome, but they won't necessarily be out there hauling gear, or offering to drive overnight when you need them. Instead, think about your friend who always saves the day, who always puts you in a good mood, or who has a knack for getting favors."

Doobie Duke Sims adds that when it comes to your friends, even your best friends, "it’s like looking at a poster of a hot girl. She looks super hot, but she’s a 2D image. When you meet her in person, without the makeup and airbrushing, in a supermarket aisle in a Walmart in some town far away from your home, is when you know this is real, this is a 3D, full-fledged human being. You’ll never know until the lights go down if that person snores or not."

Once you’ve found out who snores and who’s willing to carry some of the load, pop-rock artist Logan Lynn says touring with the right friends can provide a heck of a boost. "We had a really long, hard tour a few years back where it felt like we were miles out to sea without a paddle at times, and I remember feeling so grateful that I had my collaborator Gino Mari with me to talk me off the ledge. I find that when I'm so far from home, it's important to have home there with me. My band boys do that for me."

If a band’s entire idea of what a tour should be like comes from movies, or the wildest segments of their favorite episodes of Behind the Music, C Bock of Revolt Revolt says to let them continue to live in their fantasy world, and not the real world of your tour. "You can’t party 24-7 and be on your game with the road. It’s a mess for you, and those around you."

Logan Lynn adheres to this ideology, as well. "I'm not into playing or touring with folks who have bought into some rock 'n' roll cliche about sex, drugs, and rock and roll," he explains. "My band has been playing together for a decade because we care about the music, and we all wash our hands."

Nick Crawford of the alt-rock band My Body Sings Electric adds, "Too much of anything is bad. You need guys who are going to hang out at the bar/merch table, be social, and connect with fans, while you also need guys that you know you can rely on to take care of business behind the scenes. Balance is good. If everyone is drunk, maybe you forget to get paid. If nobody is drunk, or at least being social, people might think your band is boring and uninteresting."

You’re going to be on tour together, so you should be doing things together. This is huge for Adam Cruz of the nu-metal band Xombie, who says, "Bands that leave their ego at the door, and are willing to hang out in and outside of the venue, are always a plus. It's also great to have bands that help each other out when it comes to loading/unloading, soundchecks, covering a merch booth, and sharing equipment."

This may seem obvious, but if you’re going to be in a van with someone for hours on end, you better make sure they (and you) consider personal hygiene an important part of life. Logan Lynn remembers a time when he was on the road with a band that didn’t think cleanliness was all that important. "I was grossed out for 34 days. There have been plenty of people we've played shows with who were a nightmare to work with, but it's the wasted ones with B.O. that I remember."

You want to be memorable, but not for your stench.

7. Won’t put the tour in jeopardy

C Bock of Revolt Revolt gives an example of the latter, saying, "When the drummer refuses to get rid of his weed as you drive through Texas, he is rolling the dice on all your gear – and your livelihood. He is the guy you want to leave home. You can always get more weed down the road."

If you’re in the middle of the country, most everyone you know probably has a driver’s license, but as Neuhausen notes, a lot of musicians in NYC don't have one. "It's really frustrating to line up a tour and then realize only three out of 10 people can drive," he says.

Whether or not you have a valid driver's license, always, and I mean always, respect the person behind the wheel. C Bock has a memory of when that didn’t happen: "I recall one night where I drove all day, soundchecked, played the show, and had to drive all night again to make the next gig on time. I had a drummer and bass player in a physical altercation in front of the van as I sat waiting to leave. I was wiped out. We had been on the road for 30 out of 52 days, and I was the driver for it all. It was a stretch where I was pretty sleep deprived. I had to break it up, and then drove through two states as they slept it off. The next night one of them came at me. I’ll just say it wasn’t pretty."

Touring with veterans can be a great experience, because they should be, for the most part, consummate professionals. That said, don’t sell new bands short, as they can bring a unique element to your tour. "During our last trip to SXSW, our Japanese friend who was filming had never crossed the Mississippi before," Neuhausen recalls. "Her excitement helped the rest of us remember that we were doing something we love. It snapped us out of being jaded."

Seeing a tour through fresh eyes can be the perfect cure for any potential road weariness.

10. Only slips up occasionally

"We have had bad nights with good tourmates," Nick Crawford of My Body Sings Electric explains. "Artists are finicky, and sometimes might be prone to throwing chairs around in dressing rooms when a performance doesn’t go according to plan. That doesn’t make them bad people."

Once you’ve found an artist or a band that has all of these qualities, Logan Lynn has one final piece of advice: "I think it's important to tour regionally with new people first. We tried out a keyboard player a while back, and I remember thinking, ‘Thank God we are only in Seattle. Seattle to Portland is only three hours, and then we're home,’ but, like, what if we had been in Europe?!"

Much like your city’s recycling campaign, when you find who you think is your perfect tour partner, think globally, but act locally. If that goes well, then it’s time to really hit the road.