How to Make a Bad Review Work for You 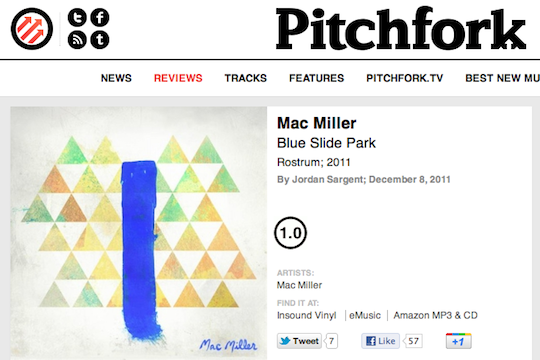 "Ask A Journalist" is a biweekly column where seasoned music writers answer questions, share tips and provide insight on the inner workings of music journalism.


Making music is personal, so it makes sense when artists take bad reviews personally. It seems every few months, the music community blows up over a negative review and/or an artists ill-advised public response. We saw this unfold recently with Lorde's response to Complex magazine’s one-two punch of a feature/lukewarm review of Iggy Azalea’s The New Classic. And while many artists understand that more often than not, the best way to deal with a bad review is to simply shut up and deal with it, not everyone is blessed with that kind of self-control. So, if you absolutely must have your say in response to a poor review, perhaps I can help.

Probably the best way to respond to a bad review, especially if you feel you have some legitimate beefs with the writer’s argument that you want to bring up, is to contact them directly. Any music writer worth their salt is in this business because they enjoy being part of a greater conversation about music, so reaching out and asking to have a conversation with a reviewer about their response to your album isn’t totally unreasonable. Just, for the love of God, be nice. We love what you do, or we would not be in the business of listening, writing and thinking about music all the time. Most of us would likely be interested in hearing what you have to say about our take on your work, if only you can manage to say it without cursing or calling us idiots. Remember that criticism — about food, music, art, anything — is a subjective pursuit. Make your case, take the writer’s response into consideration (if he or she responds at all) and try to move on. Don’t expect them to change the review they’ve already published. That will never happen.

Learn which writers to target in the first place

Sometimes a reviewer simply has different values about music than the band he’s reviewing.

A writer’s subjective take on your record can also serve as a lesson to your band in terms of who to target for press on your next release. In March of 2011, The Modern Skirts – then handily the best-loved local band in my hometown of Athens, GA – had their album, Gramahawk, reviewed by Ian Cohen at Pitchfork. He gave it a 4.8, and the crux of his issue with the record seemed to be its “y’know, fun… kinda poppy” sound. He was right that it was fun and kinda poppy; the notion that this was a problem, however, was his own. Sometimes a reviewer simply has different values about music than the band he’s reviewing. Savvy musicians can learn from how different writers respond to their work and use that information to narrow the spectrum of the writers they ask for coverage from, targeting the ones that are most likely to dig the current release. The Modern Skirts would have been foolish to pursue subsequent coverage of their music from Cohen. It clearly wasn’t his style.

Any press is good press

There’s also the matter that coverage — any coverage — increases your chances of being covered again further down the road, either by the same publication or a different one. When I pitch stories to national magazines like Paste, I often include links to other outlets that have covered the same bands to help support the argument that they’re worthy of being talked about. Even when an artist gets a lukewarm review, they may be able to parlay that into a video premiere on the same website, or attention in the News section. The relationship between artists and the press is symbiotic — once you have your foot in the door as a band a publication cares about, even if they think your record’s just okay, you’re a lot more likely to have your emails opened, your tour dates payed attention to and your content shared.

So chin up! Stay away from the temptation of posting bitter remarks or rebuttals on social media. It may seem enticing, either to make your case or to let people know that, yeah, you did see that Pitchfork gave you a 3.0 and you want to make sure they know you’re laughing it off. Trust me, that’s just uncomfortable for everyone. Try to gain some insight from the writer if you can. Take the lessons contained in the review, no matter how much you disagree with the writer’s conclusion, and let it help you work smarter in the future. And keep on keepin’ on.